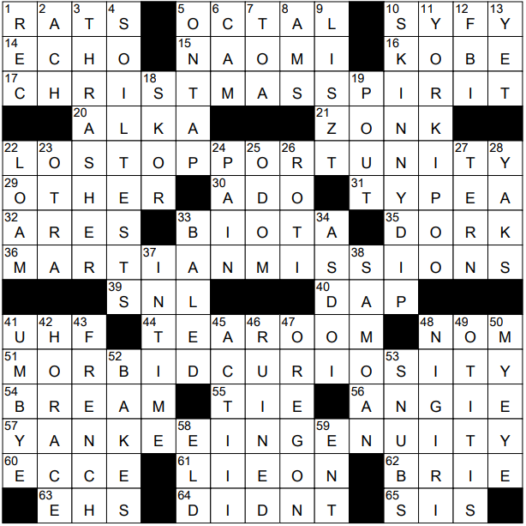 Constructed by: Noki Trias & Lawrence Barrett
Edited by: Will Shortz

Themed answers each end with the name of a MARTIAN MISSION:

The antacid known as Alka-Seltzer used an animated character called Speedy in its adverts from 1951 to 1964. Speedy had an Alka-Seltzer tablet as a body and another as a hat, and sang a jingle with the words “Plop, plop, fizz, fizz”. Speedy’s job was to get out the message that Alka-Seltzer provided speedy relief.

32 Warrior in the Greek pantheon : ARES

The bluegill is a member of the sunfish family, although it is a freshwater fish. It is also known as bream, brim or copper nose. The bluegill has the honor of being the state fish of Illinois.

For my money, “Angie” is the greatest ballad ever performed by the Rolling Stones. Despite rumors to the contrary, “Angie” doesn’t refer to a particular woman. In fact, songwriter Keith Richard says that “Angie” is a pseudonym for heroin, and the lyrics tell of his efforts to get off the drug at a detox facility in Switzerland.

The term “Yankee” originated back in the 1600s when Dutch settlers used to call English colonists “Jankes”, a disparaging term meaning “Little Johns”.

9 Composer of the piano piece played by Bugs Bunny in “Rhapsody Rabbit” : LISZT

Franz Liszt was a Hungarian composer and a fabulous pianist. Particularly towards the end of his life, Liszt gained a tremendous reputation as a teacher. While he was in his sixties, his teaching profession demanded that he commute regularly between the cities of Rome, Weimar and Budapest. It is quite remarkable that a man of such an advanced age, and in the 1870s, could do so much annual travel. It is estimated that Liszt journeyed at least 4,000 miles every year!

12 Clarice Starling’s employer in “The Silence of the Lambs,” in brief : FBI

The candy bar named “Skor” is produced by Hershey’s. “Skor” is Swedish for “shoes”, and the candy bar’s wrapping features a crown that is identical to that found in the Swedish national emblem. What shoes have to do with candy, I don’t know …

Valencia is one of the autonomous communities of Spain, and is located in the east of the country on the Mediterranean Coast. Its capital city is also called Valencia, and is the third-largest city in the nation, after Madrid and Barcelona.

45 Timing of the Mercutio/Tybalt duel in “Romeo and Juliet” : ACT III

47 Home to the deepest lake and river gorge in the U.S. : OREGON

Crater Lake is my favorite locale in the whole country. It sits in a volcanic crater giving it a near perfect circular shape. The water appears to have a deep, deep blue color and is extremely pure. There are no rivers running into the lake, so man hasn’t really had the chance to contaminate it with pollutants.

49 Likely cause of a cranky toddler’s ear-tugging : OTITIS