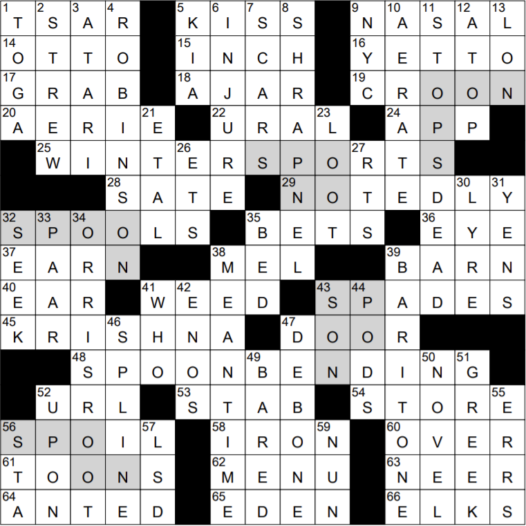 Constructed by: Guilherme Gilioli
Edited by: Will Shortz

The grid includes shaded letters that spell out “SPOON”, although those SPOONS are BENT, each using more than one line in the grid:

14 “The Simpsons” character with a palindromic name : OTTO

“Mel B” is the stage name of Melanie Brown, who came to fame as a member of the Spice Girls musical group. She took the name Mel B to distinguish herself from fellow band member Melanie Chisholm (Melanie C). Mel B was also known as “Scary Spice”, a nickname given to her by the media. American viewers saw Mel B on the TV show “America’s Got Talent” from 2013 through 2019, on which show she served as a judge.

Melanie C is a member of the English girl band the Spice Girls, with whom she has the nickname “Sporty Spice”. “Mel C” got the gig with the Spice Girls by replying to an ad in “The Stage” magazine, and auditioning alongside about 40 women who responded to the same ad. Sporty Spice really is quite sporty, and has completed the London Triathlon … twice.

The fennec fox is a small fox found in the deserts of North Africa and the Middle East. It is a crepuscular animal, meaning that it is active around dawn and dusk. The name “fennec” comes from the Berber word “fanak” meaning “fox”. It is the national animal of Algeria, and the Algerian national soccer team is nicknamed “Les Fennecs”.

The Hare Krishna mantra dates back to the 15th century. It is a 16-word mantra that can be written as:

48 Display of mentalism … or a hint to this puzzle’s shaded squares : SPOON-BENDING

3 Developer of the game Breakout : ATARI

The Sorento is an SUV made by Kia since 2002. I’ve always assumed that the car is named for the Italian city, although the spelling is different (“Sorrento”).

13 Actor Chaney nicknamed “The Man of a Thousand Faces” : LON

Orpheus is a figure from Greek mythology very often associated with poetry, singing, music and the lyre in particular. In ancient Greece there was even an Orphic cult that in effect adopted the poetry ascribed to Orpheus as central to the cult’s belief system. The adjectives “Orphic” and “Orphean” describe things pertaining to Orpheus, and because of his romantic, musical bent, the term has come to describe anything melodious or enchanting. One of the more famous stories about Orpheus describes his attempts to rescue his wife Eurydice from the underworld.

Orris root is a basic ingredient in many perfumes, one providing a so-called “base note”. It is also an ingredient in some brands of gin.

The baritone is the second-lowest of male voices, above the bass and below the tenor. The term “baritone” comes from the Greek word “barytonos” meaning “deep-sounding”.

42 First and only chimpanzee to orbit Earth : ENOS