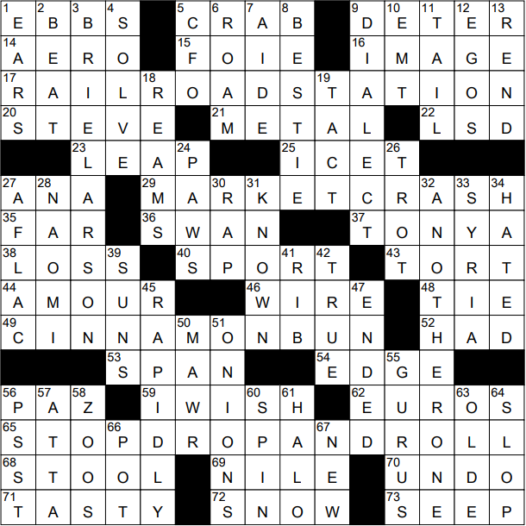 Constructed by: Tomas Spiers
Edited by: Will Shortz

An aeronaut is a pilot of a craft that is lighter than air, like a hot air balloon for example.

17 Grand Central, for one : RAILROAD STATION

The rock anthem “Born to be Wild” was made famous by the band Steppenwolf in 1967. The song is sometimes referred to as the first heavy metal song, as the words “heavy metal thunder” appear in the lyric, the first recorded use of the term “heavy metal” in rock music.

I wasn’t sure of the origin of the term “leap year”, and when I checked I found it to be fairly obvious. As a reference, let’s use March 25, 2007, a Sunday. The year before, in 2006, March 25th fell one weekday earlier on a Saturday. That follows the rule that any particular date moves forward in the week by one day, from one year to the next. However, the next year (2008) has an extra day, February 29th. So March 25, 2008 falls on a Tuesday, “leaping” two weekdays forward, not one, as 2008 is a “leap” year. I think I am more confused now than when I started this paragraph …

The Wall Street Crash of 1929 that signalled the start of the Great Depression did not take place in one day. The first big drop in the market took place on October 24 (Black Thursday). Things stabilized on Friday, and then the slide continued on the 28th (Black Monday) and the 29th (Black Tuesday).

Tonya Harding won the US Figure Skating Championships in 1991. Harding’s reputation was greatly tarnished in the run up to the 1994 Olympics, when her former husband and her bodyguard contracted someone to attack Harding’s main competitor, Nancy Kerrigan. During a practice session for the US Championship, a hired thug assaulted Kerrigan with a police baton, attempting to break her leg. Kerrigan was forced to withdraw, and Harding won the championship. Both Harding and Kerrigan were selected for the Olympic team, and despite attempts to get Harding removed, both skated at the Games in Lillehammer. Harding finished in eighth place, and Kerrigan won the silver medal. Harding admitted that she helped cover up the attack when she found out about it, and was stripped of her US Championship title.

The Loire is the longest river in France. It is so long that it drains one-fifth of the nation’s land mass. The Loire rises in the southeast, in the Cevennes mountain range, then heads north then due west, emptying into the Bay of Biscay at the city of Nantes. The Loire Valley is home to some of France’s most famous wine production, and includes the wine regions of Sancerre, Pouilly-Fumé and Muscadet. It is also home to some of the nation’s most spectacular châteaux. There are over 300 castles along the river, built by French kings and their courtiers.

49 Pastry with a swirl : CINNAMON BUN

One of my favorite places to perch. Well, it used to be a couple of years ago …

69 Where baby Moses was found : NILE

According to the Bible, the Pharaoh issued an edict that all male Hebrew children be drowned in the river Nile soon after birth. Moses’ mother saved her child by placing him in a basket and hiding him among the bulrushes at the edge of the Nile. The baby was found and adopted by the Pharaoh’s daughter.

Arthur Wynne is generally credited with the invention of what we now know as a crossword puzzle. Wynne was born in Liverpool, England and emigrated to the US when he was 19-years-old. He worked as a journalist and was living in Cedar Grove, New Jersey in 1913 when he introduced a “Word-Cross Puzzle” in his page of puzzles written for the “New York World”. The first book of crossword puzzles was published by Shuster & Shuster, in 1924. The collection of puzzles was a huge hit, and crosswords were elevated to the level of “a craze” in 1924 and 1925.

The chief financial officer (CFO) is particularly concerned about his or her company’s profit and loss (P&L).

10 An essential worker, for short : EMT

11 A sea horse has a prehensile one : TAIL

33 Damascus is its capital : SYRIA

“I Hated, Hated, Hated This Movie” is a collection consisting of a couple of hundred of Roger Ebert’s most acerbic and negative film reviews. Included are reviews of “Armageddon” (1998), “The Beverly Hillbillies” (1993) and “Police Academy” (1984).

58 They have everything from aardvarks to zebras : ZOOS