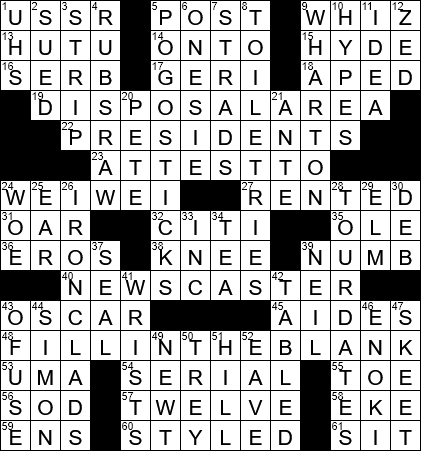 Themed answers require us to insert the word “FILL” IN THE BLANK space in the clue:

Misanthropy is a dislike of humans in general. The term comes from the Greek “misos” meaning “hatred” and “anthropos” meaning “man, human being”.

Vice President Millard Fillmore took over the US Presidency when Zachary Taylor died after only 16 months in office. Fillmore was born in the Finger Lakes region of New York State, but grew up around Buffalo. He was one of the founders of the University of Buffalo and served as chancellor there after he left office in 1853. He was also the last Whig to occupy the White House, as the party broke up after Fillmore’s presidency.

Ai Weiwei is a Chinese artist who has been vocal in his criticism of his country’s position on human rights and democracy. Wei Wei was an artistic consultant largely responsible for the look and feel of the Beijing National Stadium, commonly referred to as the “Bird’s Nest”, that was showcased during the 2008 Summer Olympics.

36 God depicted in a figure called an “amoretto” : EROS

An “amoretto” is a cupid, one often represented in artwork as a little chubby naked boy.

“Gattaca” is a science fiction movie starring Ethan Hawke and Uma Thurman that was released in 1997. Set in the not-too-distant future, the film describes a society in which potential children are preselected so that they inherit the most desirable traits from their parents. The title “Gattaca” is the space agency featured in the storyline. I saw this one relatively recently, and found it very absorbing …

“En pointe” is a French term used to describe ballet dancing on the tips of the toes. A ballerina wears pointe shoes (sometimes “toe shoes”) to perform this delightful-looking, albeit unhealthy, feat (pun!).

5 Some bouncers use them : POGO STICKS

6 Garment that typically has snaps : ONESIE

Generations of the Stradivari family produced violins and other stringed instruments, the most famous of which were constructed by Antonio Stradivari.

Warren Buffett is often referred to with the nicknames “Wizard of Omaha” and “Oracle of Omaha”. Despite being one of the wealthiest men in the world, Buffet lives a relatively frugal and modest life. Buffett also has a very Jeffersonian attitude towards the role his wealth plays within his family. He has set up his estate so that his children will inherit enough money to be independent, but the vast majority of his assets are going to charity, both before and after he dies. My hero …

Pete Rose was a talented baseball player who holds the record for all-time Major League hits. Rose’s nickname was “Charlie Hustle”. In recent years, his reputation has been tarnished by admissions that he bet on games in which he played and managed.

Neil Simon was one of my favorite playwrights. He wrote over thirty plays and about thirty screenplays. My favorite play penned by Simon has to be “Brighton Beach Memoirs”, but the list of his great stage works seems endless and includes “Barefoot in the Park”, “The Odd Couple”, “Sweet Charity”, “Plaza Suite”, “California Suite”, “Biloxi Blues” and “The Goodbye Girl”.

47 Olympics event whose participants shoot for the gold : SKEET

49 Pond dweller that can regenerate its eyes : NEWT

Supposedly, there were seven separate settlements on the top of seven hills east of the River Tiber, prior to the founding of the city of Rome. Tradition dictates that Romulus founded Rome on one of these hills, namely Palatine Hill, and the city came to encompass all seven existing settlements. The most famous hill in modern-day Rome is probably Vatican Hill, but it lies outside of the walled ancient city.