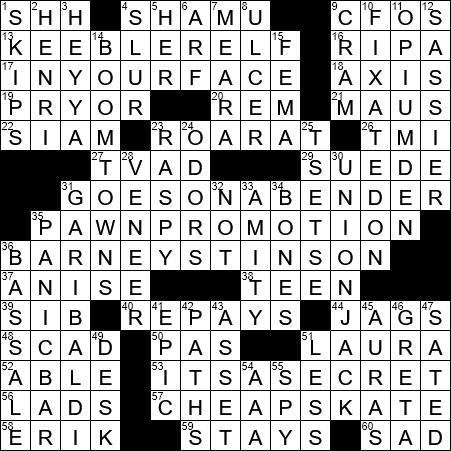 4 Performer for whom a San Diego stadium was named : SHAMU

9 Some company bigwigs, for short : CFOS

19 Comic whom Seinfeld called “the Picasso of our profession” : PRYOR

“Maus” is a graphic novel published in 1991, although it appeared in serial form from 1980 to 1991. Written and drawn by cartoonist Art Spiegelman, “Maus” became the first graphic novel to win a Pulitzer, doing so in 1992.

35 What it takes to become a queen? : PAWN PROMOTION

36 Neil Patrick Harris’s role on “How I Met Your Mother” : BARNEY STINSON

37 Herb of the parsley family : ANISE

44 Some pricey cars, for short : JAGS

“Pourquoi pas?” is French for “Why not?”

“Ozark” is an excellent TV crime show starring Jason Bateman and Laura Linney as a married couple who relocate from Chicago to the Missouri Ozarks. The couple fall foul of Mexican drug lord after a money laundering scheme goes awry. The show is set at a lake resort in the Ozarks, although filming actually takes place at lakes in the Atlanta area in order to take advantage of tax breaks offered by the State of Georgia.

A skinflint is a miser. The term “skinflint” arose as slang around 1700, to describe a person who would “skin a flint” in order to save or make money.

58 Leading role in “The Phantom of the Opera” : ERIK

Henri Bergson was a French philosopher who was awarded the Nobel Prize in Literature in 1927.

“Hey Ya!” is a 2003 song by hip hop duo Outkast. I took a look at the song’s official music video, as I read that it was inspired by the 1964 appearance of the Beatles on “The Ed Sullivan Show”. I enjoyed the video, although I must admit that I watched it with the sound turned down …

The Newfoundland is a breed that originated as a working dog for fishermen in what was then the Dominion of Newfoundland. They were mainly used to haul heavy fishing nets.

7 Half of a classic comedy duo : MEARA

8 Reason to see a gastroenterologist : ULCER

The Department of Homeland Security (DHS) was created in 2002 after the September 11th attacks. Today, the DHS has over 200,000 employees making it the third largest department in the cabinet (the biggest employers are the Departments of Defense and Veterans Affairs). The formation of the DHS was the biggest government reorganization in US history, with 22 government agencies drawn into a single organization.

The Union Jack is a “jack” (flag) representing the “Union” (United Kingdom of Great Britain and Northern Ireland). The flag is made up of three crosses:

The wonderful board game called Stratego derives from a traditional Chinese game called “Jungle” or “Animal Chess”. The major difference between Stratego and Jungle is that in the latter, the identity of the pieces is not hidden from one’s opponent.