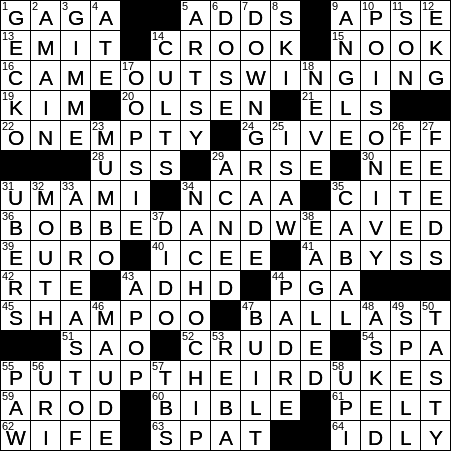 Constructed by: Eric Berlin
Edited by: Will Shortz

Today’s Theme (according to Bill): At the Big Brawl …

Themed clues are similar, and describe certain professionals “at the big brawl”. Themed answers are common phrases associated with a brawl:

9 Recessed area in a church : APSE

“Kim Possible” is an animated Disney TV series for kids that originally ran from 2002 until 2007. The title character is a teenage crimefighter, with a partner named Ron Stoppable.

20 Jimmy of the Daily Planet : OLSEN

31 Savory quality, as from MSG : UMAMI

36 At the big brawl, the hairstylist … : … BOBBED AND WEAVED

39 Its symbol resembles a C with two lines across the center : EURO

40 Drink that can cause brain freeze : ICEE

45 Freebie in a hotel bathroom : SHAMPOO

60 Book that people take an oath on : BIBLE

The Gecko is the “spokes-lizard” for GEICO. When the Gecko was introduced in 1999, he was voiced by actor Kelsey Grammer of “Cheers” and “Frasier” fame. Since then, the Gecko has been voiced by British radio presenter Dave Kelly and most recently by actor Jake Wood, who plays Max Branning on the British soap opera “EastEnders”.

10 Subject of the saying “Leaves of three, let it be” : POISON IVY

“Mumbo jumbo” means big and empty talk, and is a term that we’ve been using since the late 1800s. Supposedly the term comes from a Mandingo word for an idol that was worshipped by some tribes in Africa.

38 Went two under par on a hole : EAGLED

The San Diego Padres baseball team was founded in 1969, and immediately joined the ranks of Major League Baseball as an expansion team. The Padres took their name from a Minor League team that had been in the city since 1936. The name is Spanish for “fathers” and is a reference to the Franciscan Friars from Spain who founded San Diego in 1769.