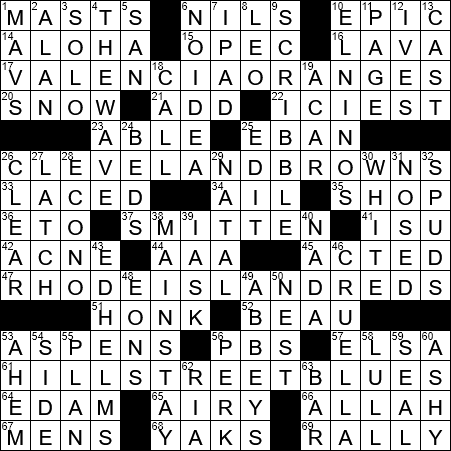 Constructed by: Ellis Hay
Edited by: Will Shortz

Today’s Theme (according to Bill): The Right Colors

Themed answers each end with a color (in the plural):

1 The Mayflower had three of them : MASTS

Famously, the Mayflower was the ship that transported the Pilgrims from Plymouth, England to the New World in 1620. Most of the Pilgrims actually boarded the vessel on the River Thames in London. The Mayflower then anchored at Southampton Water on the south coast of England where she rendezvoused with another ship, the Speedwell, that was carrying English separatist Puritans from Holland. Both vessels set off for America, but eventually had to berth in Plymouth after the Speedwell started to leak. The Speedwell was in no condition to cross the Atlantic, and so the Mayflower ended up making the historic voyage alone.

The musician Nils Lofgren was a member of Bruce Springsteen’s E Street Band for over 25 years. Lofgren provided vocals and played guitar, and was hired as the replacement for Steven Van Zandt.

15 Grp. with many Mideast members : OPEC

16 Outpouring from a volcano : LAVA

Despite the name, the Valencia orange is a sweet orange hybrid that was developed in Southern California in the mid-1800s. Agronomist William Wofskill chose the name for his hybrid because Valencia, Spain was known for the regions sweet oranges. The new hybrid became so successful in Southern California that the name “Valencia” was given to a neighborhood in Santa Clarita.

26 Only N.F.L. team that doesn’t have a logo on its helmets : CLEVELAND BROWNS

The Cleveland Browns football team was a charter member of the All-American Football Conference, formed in 1946. Cleveland is the only NFL city that has never hosted nor sent a team to the Super Bowl. It’s also the only NFL team whose players have no logo on their helmets.

As the sergeant on “Hill Street Blues” used to say, “Let’s be careful out there.”

64 Dutch town with a cheese named after it : EDAM

Charles Lindbergh was the American pilot who made the first solo, non-stop flight across the Atlantic Ocean, a distance of nearly 3,600 miles. He won the accolades of a whole country for that feat, and was awarded the Medal of Honor (for which Lindbergh was eligible, as an Army Reserve officer). His new-found fame brought tragedy to his door, however, when a kidnapper took his infant son from his home in East Amwell, New Jersey. A ransom was paid in part, but the child was never returned, and was found dead a few weeks later. It was as a result of this case that Congress made kidnapping a federal offence should there be any aspect of the crime that crosses a state line.

Tablet computers are like a cross between a laptop and a smartphone. Tablets differ from laptops in that they usually have fewer input/output capabilities. They differ from smartphones in that they are larger, and often lack access to a cellular network. We got our first real glimpse of the tablet computing concept in the 1968 movie “2001: A Space Odyssey”. The first really successful tablet computer was Apple’s iPad, which was released not in 2001, but in 2010.

When the surface temperature of much of the Pacific Ocean rises more than half a degree centigrade, then there is said to be an El Niño episode. That small temperature change in the Pacific has been associated with climatic changes that can stretch right across the globe. El Niño is Spanish for “the boy” and is a reference to the Christ child. The phenomenon was given this particular Spanish name because the warming is usually noticed near South America and around Christmas-time.

Rental car company Avis used the tagline “We Try Harder” for five decades, starting in the early 1960s. The slogan had its roots in a 1962 ad campaign in which the company made brilliant use of its position behind market leader Hertz. The first rendition of the new tagline was “When you’re only No. 2, you try harder. Or else”. Within a year, Avis turned its first profit in over a decade, and within three years, increased the company’s market share from 29% to 36%. Avis eventually moved on to the slogan “It’s Your Space” in 2012.

“White Christmas” is a song composed by Irving Berlin. The famous 1942 recording of “White Christmas” by Bing Crosby has sold more than 50 million copies worldwide, making it the best-selling single of all time.

43 Actor who played Andy Bernard on “The Office” : ED HELMS

63 What a priest, a minister and a rabbi might walk into : BAR