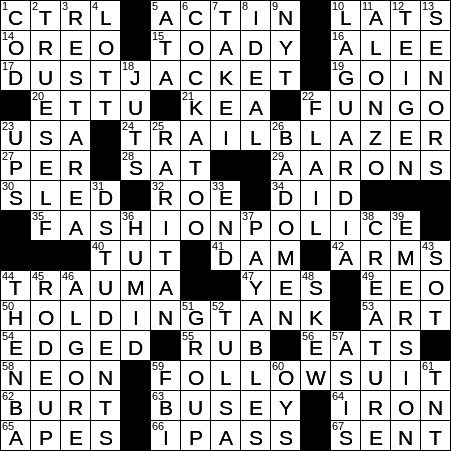 Today’s themed clues refer to an activity engaged in by the POLICE, and the answers are phrases that end with an item of attire:

1. Relative of Alt on a keyboard : CTRL

If you take a close look at the embossed design on the front and back of an Oreo cookie, you’ll spot the main elements of the Nabisco logo. Those elements are an oval with a cross on top, a cross with two bars. Usually the company name “Nabisco” is inside the oval, but for the cookie it’s the brand name “Oreo”. The current embossed design was introduced 1952.

15. One agreeing with everything you say : TOADY

A fungo bat is lighter and shorter than a regular baseball bat, and tends to be used by coaches during practices. The lighter bat allows for more hits without tiring out the poor coach!

30. Conveyance for Calvin and Hobbes : SLED

The actor Burt Reynolds is famous for playing the “Bandit” in “Smokey and the Bandit”, and Lewis Medlock in “Deliverance”, but his critically acclaimed performance was as Jack Horner in the 1997 movie “Boogie Nights”. Off the screen he was quite the man around town, romantically linked to the likes of Tammy Wynette, Lucie Arnaz (daughter of Lucille Ball), Sally Field, Dinah Shore and Chris Evert. He was married to Judy Carne, as well as Loni Anderson.

“Boogie Nights” was released in 1997, and deals with the pornographic movie business. Burt Reynolds plays a director in the industry. It’s not exactly exalted subject matter, but the movie does have an impressive cast (including Mark Wahlberg, Julianne Moore, William H. Macy and Philip Seymour Hoffman).

The actor Gary Busey is perhaps most acclaimed for playing Buddy Holly in the 1978 biographical film “The Buddy Holly Story”. In 1988, Busey was suffered a skull fracture in a motorcycle accident in which he was not wearing a helmet. Busey himself has stated that the resulting brain injury has altered his behavior, causing him to speak and act impulsively.

6. Parrot with a showy crest : COCKATOO

Basketball player Alonzo Mourning played most of his career with the Miami Heat, and in 2009 was the first person to have his number retired. In 2003, Mourning had a kidney replacement, a donation from a cousin that he had not seen in 25 years.

To flail about is to swing wildly, either literally or figuratively. The verb comes from the noun “flail”, which is an implement for threshing grain.