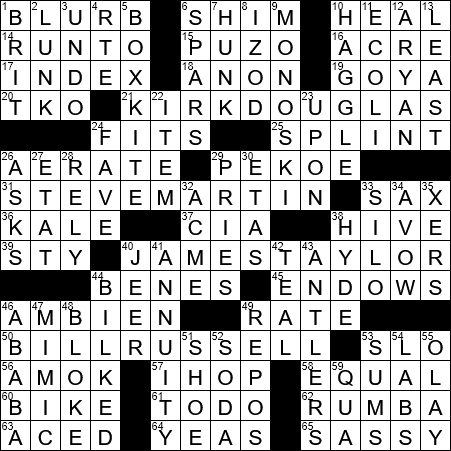 Constructed by: Susan Gelfand
Edited by: Will Shortz

Today’s Theme: Two Celebs in One

The novelist and screenwriter Mario Puzo, was best known for his book “The Godfather”, which he also co-adapted for the big screen. Puzo also wrote two sequels, “The Last Don” and “Omertà”, that latter being published after his death. His name is less associated with some very famous screenplays that he wrote, including “Earthquake”, “Superman” and “Superman II”. Puzo won two Oscars for Best Adapted Screenplay: for “The Godfather” (1972) and for “The Godfather Part II” (1974).

Goya Foods is a supplier of food products headquartered in Secaucus, New Jersey. The company was founded in 1936 by two immigrants from Spain.

Megastar Kirk Douglas was born Issur Danielovitch in Upstate New York. One of Douglas’ coups was to purchase the film-making rights to the play “One Flew Over the Cuckoo’s Nest”, in which he starred on Broadway in the mid-sixties. He gave those rights to his son, actor Michael Douglas, who made it into the magnificent movie of the same name. Kirk Douglas celebrated his 100th birthday in December, 2016.

Kirk Cameron is perhaps best known for playing Mike Seaver on the sitcom “Growing Pains” when he was a child actor. Cameron ended up marrying Chelsea Noble, the young actress who played his girlfriend on “Growing Pains”. Also, Cameron is a co-founder of the Christian evangelical ministry known as the Way of the Master (WOTM).

Douglas Fairbanks was an actor famous for playing swashbuckler types in movies in the Silent Era. His most famous roles were in “The Thief of Baghdad”, “Robin Hood” and “The Mark of Zorro”. Fairbanks’ first marriage resulted in his only child, the actor Douglas Fairbanks Jr. Fairbanks’ second marriage was to fellow actor Mary Pickford.

The actor Steve Carell has achieved great success on both television and in movies. On the small screen, Carell came to prominence on “The Daily Show with Jon Stewart” and then of as the lead in the US version of “The Office”. On the big screen, he starred in “The 40-Year-Old Virgin”, “Evan Almighty”. My personal favorite Carell movie is 2007’s ”Dan in Real Life”, in which he stars opposite the wonderful Juliette Binoche.

Martin Short’s father emigrated to Canada as a refugee from Ireland during the 1919-1921 Irish War of Independence. In fact, I worked closely with one of Martin’s cousins back in Ireland. Martin Short started out his career as a comedian with “SCTV” before moving to “Saturday Night Live” where he became one of the show’s most celebrated stars. Back in 1972 Short appeared in a production of “Godspell” alongside Gilda Radner. Short and Radner dated for a while, then Short started going out with Radner’s understudy, Nancy Dolman. Dolman and Short married in 1980. Any of you that follow British politics will know of Clare Short, a minister in the cabinet of former Prime Minister Tony Blair. Clare and Martin are first cousins.

James Taylor is a singer-songwriter and guitarist who first achieved success with his 1070 song “Fire and Rain”. Famously, Taylor was married to fellow singer Carly Simon, from 1972 to 1983.

The singer James Brown was often referred to as “The Godfather of Soul” and sometimes “Mr. Dynamite”. He was born in Barnwell, South Carolina and had a rough and impoverished upbringing. He lived for some years in his aunt’s house which she ran as a brothel, and when he was sixteen he was convicted of armed robbery and was sent to reform school. While in reform school he was noticed by the R&B star Bobby Byrd, who took him under his wing. Byrd helped secure the young man an early release, and thereafter Brown turned his energies to music.

Ambien is a brand name for the prescription drug zolpidem. I have a friend who used to swear by Ambien for helping cope with jet lag. I once had to deal with jet lag almost monthly and swear by the diet supplement melatonin, which you can buy over the counter here in the US. But, I am no doctor so don’t listen to anything I say …

Bill Walton is retired NBA basketball player. After an outstanding college career with the UCLA Bruins, Walton played professionally with the Portland Trail Blazers, the San Diego Clippers and the Boston Celtics. He was plagued with injuries during his pro career, and after retiring from the game had to have both of his ankles surgically fused. Walton now holds the record of missing the most games in an NBA playing career.

The equals sign (=) was the 1557 creation of a Welsh physician and mathematician Robert Recorde. Recorde proposed the use of two parallel lines to indicate equality “because no 2 things, can be more equal.”

Our verb “to haggle”, meaning to argue about the price, originally meant “to cut unevenly”. The suggestion is that haggling is chopping away at the price.

The Indus river rises in Tibet and flows through the length of Pakistan and empties into the Arabian Sea, the part of the Indian Ocean lying to the west of the Indian subcontinent. The Indus gives its name to the country of India as “India” used to be the name of the region along the eastern banks of the river, which paradoxically is now in modern-day Pakistan.

41. Retirement income, for some : ANNUITY

The beautiful color of teal takes it name from the duck called a teal, which has dark greenish-blue (teal) markings on its head and wings.

Addis Ababa is the capital city of Ethiopia. The city is relatively young, having being founded in 1886 by Emperor Menelik II. Addis Ababa holds an important position within the nations of Africa as it is home to many international organizations that are focused on the continent.