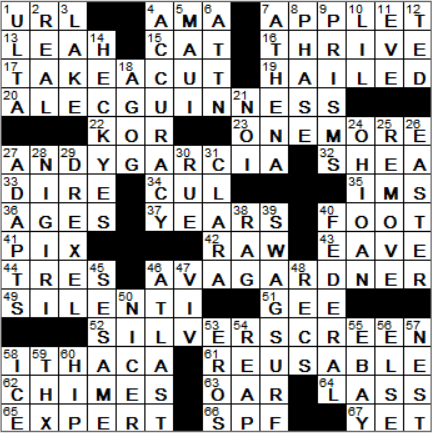 Today’s themed answers are all stars of the SILVER SCREEN whose initials are AG (NB: Ag is the symbol for SILVER in the periodic table of the elements):

“Applet” is the name given to a small application that runs within another larger computer program.

According to the Bible, Leah was one of the two wives of Jacob, the other being Leah’s sister Rachel. Jacob’s intention had been to marry Rachel, but the Leah and Rachel’s father “switched” his daughters and provided Leah as the veiled bride. Jacob married Rachel a week later, and lived with the two wives concurrently.

The river referred to in the movie (and novel) “The Bridge on the River Kwai” is actually called the Khwae Yai River, and is in western Thailand. The original novel by Pierre Boulle was published in French in 1952, and the wonderful movie released in 1957. Both tell the story of construction of part of the Burma Railway and a bridge over the river, using prisoners of war as laborers. The film stars William Holden, Alec Guinness and Jack Hawkins.

“Encore” is French for “again, one more time”, and is a shout that an audience member will make here in North America to request another song, say. But, the term is not used this way in France. Rather, the audience will shout “Bis!”, which is the Italian for “twice!”

Andy Garcia is a Hollywood actor from Havana, Cuba. Garcia moved to Miami with his family when he was 5 years old, just after the failed Bay of Pigs Invasion. Andy’s father was an avocado farmer in Cuba, and in Miami built a million-dollar fragrance business. Recently, Garcia is known for playing ruthless casino owner Terry Benedict in the “Ocean’s Eleven” series of movies.

“Gchat” was a common name used for the Google Talk instant messaging (IM) service. Google Talk offered both text and voice communication as well as a plugin that allowed video chat. All of this functionality was replaced with the Google Hangouts service, and more recently with Google Duo.

44. Number between dos and cuatro : TRES

“Mogambo” is a 1953 film noted for its spectacular scenes set in the African jungle. “Mogambo” is actually a remake of a 1932 movie called “Red Dust”. Gable plays the romantic lead in both the original and the remake, even though they are filmed 21 years apart. Gable gets involved with Jean Harlow and Mary Astor in the original, and with Ava Gardner and Grace Kelly in the remake.

Ezra Cornell was an associate of Samuel Morse and made his money in the telegraph business. After he retired he co-founded Cornell University in Ithaca, New York. He provided a generous endowment and donated his farm as a site for the school, and was then rewarded by having the institute named after him.

An aficionado is an enthusiast. Imported from Spanish, “aficionado” was originally used in English to describe a devotee of bullfighting.

US Senator Ted Cruz served as Solicitor General for the state of Texas before heading to Washington. Cruz was appointed Solicitor General in 2003 at the age of 32, making him the youngest Solicitor General in the country. Famously, Cruz is an opponent of the Affordable Care Act and made a speech in 2013 in the US Senate on the subject that lasted for 21 hours and 19 minutes. It was the fourth longest speech in the history of the Senate.

24. From Columbus or Cleveland : OHIOAN

The city of Columbus, Ohio is a “purpose-built” state capital. The state legislature selected the location for Ohio’s new capital in 1812, choosing dense forestland with no significant settlement, largely due to its strategic location in the center of the state. The name was chosen in honor of the explorer Christopher Columbus.

Drexel University is a private school in Philadelphia, with a campus in Sacramento. It was founded in 1891 by philanthropist Anthony J. Drexel who was a Philadelphia financier. The school was originally known as the Drexel Institute of Art, Science and Industry.