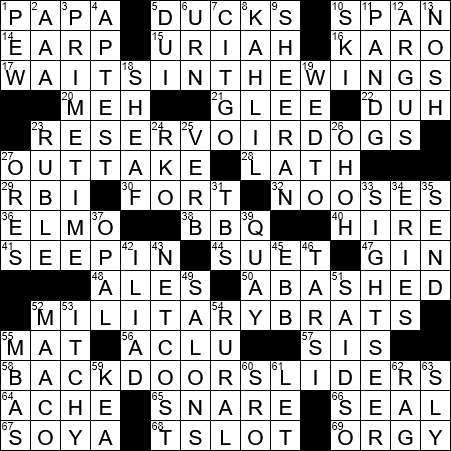 Each of today’s themed answers ends with something one might eat at a BBQ:

The story of “Goldilocks and the Three Bears” was first recorded in 1837, in England, although the narrative was around before it was actually written down. The original fairy tale was rather gruesome, but successive versions became more family-oriented. The character that eventually became Goldilocks was originally an elderly woman, and the three “nameless” bears became Papa Bear, Mama Bear and Baby Bear.

Uriah Heep is a sniveling insincere character in the novel “David Copperfield” by Charles Dickens. The character is such a “yes man” that today, if we know someone who behaves the same way, then we might call that person a “Uriah Heep”.

Karo is a brand of corn syrup, an industrially manufactured sweetener derived from corn.

“Reservoir Dogs” was the first film directed by Quentin Tarantino and was released in 1992. I really don’t like Tarantino movies as I just cannot take all the violence. I checked the cast listing for “Reservoir Dogs” and it is a “men only” production. There are no named characters in the film played by women. All I can see is Linda Kaye who played “Shocked Woman”, and Suzanne Celeste who played “Shot Woman” …

SEAL is an acronym used by the US Navy’s SEa, Air and Land teams. The SEALs were born out of the Navy’s special warfare groups from WWII, like the Underwater Demolition Teams and the Motor Torpedo Boat Squadrons. The Navy SEAL unit was established soon after President Kennedy’s famous speech in which he announced the plan to put a man on the moon, as in the same speech the president allocated $100m of funding to strengthen special operations forces. The Navy used some of this money to set up guerrilla and counterguerrilla units, which soon became the SEALs.

In the world of television, “prime time” is that part of the day when networks and advertisers bring maximize revenues due to the high number of viewers. Prime time is often defined as 7-10 p.m. Mountain and Central Time, and 8-11 p.m. Pacific and Eastern Time.

The ruble (also “rouble”) is the unit of currency in Russia, as well as several other countries of the former Soviet Union. One ruble is divided into one hundred kopecks (also “kopeks”).

1941’s “Citizen Kane” was the first film made by Orson Welles, and considered by many to be the finest film ever made. It’s a remarkable achievement by Wells, as he played the lead, and also produced and directed. Despite all the accolades for “Citizen Kane” over the decades, the movie was far from a commercial success in its early run and actually lost money at the box office.

“The Iliad” is an epic poem by the Greek poet Homer, which tells the story of the ten-year siege of Ilium (also known as Troy) during the Trojan war. “The Odyssey”, also attributed to Homer, is sometimes described as a sequel to “The Iliad”.

MAACO Collision Repair & Auto Painting was founded by Anthony A. Martino ten years after he launched AAMCO Transmissions. The names of both companies were derived from the first letters of his name: AAM.

Michael Bloomberg served as Mayor of New York City from 2002 to 2013. He is an incredibly rich man, having accumulated his wealth as the founder and majority owner of a global financial data and media company that bears his name. Bloomberg was a Democrat and then switched allegiance to the Republican Party just prior to running for Mayor of New York. He left the Republican Party in 2007 and was re-elected as Mayor in 2009 as an Independent.

27. Scene not used for the final version of a film : OUTTAKE

54. Neither urban nor suburban : RURAL