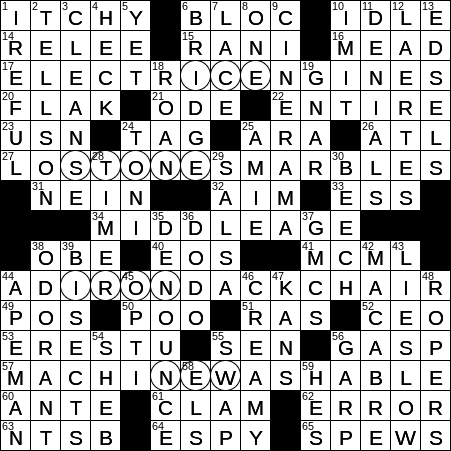 CROSSWORD SETTER: Jules P. Markey
THEME: Middle Age
Today’s themed answers include hidden words somewhere in the MIDDLE, each of which is an AGE:

34A. Crisis time, for some … or a hint to each of the circled words : MIDDLE AGE

Today’s Wiki-est, Amazonian Googlies
Across
6. OPEC, e.g. : BLOC
The OPEC cartel (the Organization of the Petroleum Exporting Countries) was formally established in 1960 and has been headquartered in Vienna since 1965. The US is actually the third largest oil producer in the world (after Russia and Saudi Arabia). One reason America isn’t in OPEC, even though we are a big producer, is that we import a lot more than we export. But we all probably knew that already …

15. Indian royal : RANI
A ranee (also spelled “rani”) is a queen or a princess, the female equivalent of a raja in India.

16. “Honey wine” : MEAD
Mead is a lovely drink, made from fermented honey and water.

17. Things that power Teslas : ELECTRIC ENGINES (hiding “ice age”)
Ice ages are periods in the Earth’s history when there are extensive ice sheets present in the northern and southern hemispheres. One might argue that we are still in an ice age that began 2.6 million years ago, as evidenced by the presence of ice sheets covering Greenland and Antarctica.

20. Criticism, informally : FLAK
“Flak” was originally an acronym from the German term for an aircraft defense cannon (FLiegerAbwehrKanone). Flak then became used in English as a general term for antiaircraft fire, and ultimately a term for verbal criticism as in “to take flak”.

23. SEAL’s org. : USN
SEAL is an acronym used by the US Navy’s SEa, Air and Land teams. The SEALs were born out of the Navy’s special warfare groups from WWII, like the Underwater Demolition Teams and the Motor Torpedo Boat Squadrons. The Navy SEAL unit was established soon after President Kennedy’s famous speech in which he announced the plan to put a man on the moon, as in the same speech the president allocated $100m of funding to strengthen special operations forces. The Navy used some of this money to set up guerrilla and counterguerrilla units, which soon became the SEALs.

27. Went bonkers : LOST ONE’S MARBLES (hiding “Stone Age”)
Ancient societies can be classified by the “three-age system”, which depends on the prevalence of materials used to make tools. The three ages are:

31. Teutonic turndown : NEIN
The Germanic peoples of Northern Europe are often called Teutonic, a term which originated with the Teutons, one of the Germanic tribes that lived in the region in the days of Ancient Greece and Rome.

33. Snaky character : ESS
There’s a letter S (ess) in the word “snaky”, and the letter S itself looks rather snaky.

38. It’s an honour: Abbr. : OBE
The Most Excellent Order of the British Empire is an order of chivalry in the UK that was established in 1917 by King George V. There are five classes within the order, which are in descending seniority:

40. Camera named for a goddess : EOS
I’ve been using Canon EOS cameras for decades now, and have nothing but good things to say about the cameras and the lenses. The EOS name stands for Electro-Optical System, and was chosen because it evokes the name of Eos, the Titan goddess of dawn from Greek mythology.

41. Year the Korean War began : MCML
Korea was occupied by the Japanese military from 1910 until Japan surrendered at the end of WWII in 1945. While the UN was working towards a trusteeship administration for Korea, the Soviet Union managed the Korean Peninsula north of the 38th parallel and the US managed the south. The UN’s plans came to naught as the Cold War dictated the establishment of the two separate states of North Korea and South Korea. North Korea invaded the South in 1950, leading to the Korean War. After three years of fighting, the border between the two states became the demarcation line between the two military forces on the day the Armistice Agreement was signed. That line runs diagonally across the 38th parallel, and is better known as the Korean Demilitarized Zone (DMZ).

44. Lakeside furniture item : ADIRONDACK CHAIR (hiding “Iron Age”)
An Adirondack chair is a wooden chair designed for use outdoors. The original Adirondack chair was designed in 1903 by one Thomas Lee, who was vacationing in Westport, New York in the Adirondack Mountains.

53. 1974 hit with Spanish lyrics : ERES TU
We have a big event across Europe every year called the Eurovision Song Contest. Each nation enters one song in competition with each other, and then voters across the whole continent decide on the winner. That’s how ABBA got their big break when they won in 1974 with “Waterloo”. In 1973, Spain’s entry was “Eres tú” (the Spanish for “You Are”) sung by the band Mocedades. “Eres tu” came second in the competition, but should have won in my humble opinion.

55. Joe Biden, for 36 yrs. : SEN
Vice President Joe Biden was a US Senator representing the state of Delaware from 1973 until he joined the Obama administration. While he was a senator, Vice President Biden commuted to Washington from Wilmington, Delaware almost every working day. He was such an active customer and supporter of Amtrak that the Wilmington Station was renamed as the Joseph R. Biden Railroad Station in 2011. Biden has made over 7,000 trips from that station, and the Amtrak crews were known to even hold the last train for a few minutes so that he could catch it. Biden earned himself the nickname “Amtrak Joe”.

57. Label rarely seen on silk garments : MACHINE WASHABLE (hiding “new age”)
New-Age music is created to provide a relaxing and stress-free atmosphere. The New Age movement is often said to have begun with the release of an album called “Spectrum Suite” by Steven Halpern in 1975.

63. Crash-probing agcy. : NTSB
The National Transportation Safety Board (NTSB) is responsible for the investigation of major accidents involving transportation. Included in this broad definition is the transportation of fluids in pipelines. The organization is independent in that it has no ties to other government agencies or departments so that its investigations can be viewed as “impartial”. The NTSB also earns a little money for the US as it hires out its investigation teams to countries who don’t have the necessary resources available on their own soil.

Down
6. Game for dummies? : BRIDGE
Four people are needed to play the card game bridge. For each round, one person doesn’t participate in the play, and is designated the “dummy”. When playing in my house, he or she goes and gets the drinks …

7. Spike, as punch : LACE
To lace a drink, is to spike it, by adding perhaps some alcohol or other strong substance.

9. Wide-screen movie format : CINERAMA
Cinerama is a widescreen format that was introduced in some theaters in the fifties. A Cinerama screen is very curved, and it takes three movie projectors operating simultaneously to provide the full image.

12. Hamlet’s killer : LAERTES
In William Shakespeare’s play “Hamlet”, Laertes is the son of Polonius and brother of Ophelia. It is Laertes who kills Hamlet using a poisoned sword..

13. 1950s autos with “horse collar” grilles : EDSELS
The Edsel brand of automobile was named for Edsel, son of Henry Ford. Sadly, the name “Edsel” has become synonymous with “failure”, which was no fault of Edsel himself who had died several years before the Edsel line was introduced. When the Ford Motor Company introduced the Edsel on 4 September 1957, Ford proclaimed the day to be “E Day”.

24. Literature Nobelist Morrison : TONI
The writer Toni Morrison won the Nobel Prize for Literature in 1993. Amongst other things, Morrison is noted for coining the phrase, “our first black President”, a reference to President Bill Clinton.

29. A dance, or a dip : SALSA
The genre of music called salsa is a modern interpretation of various Cuban traditional music styles.

30. Tree with triangular nuts : BEECH
The small triangular nuts of the beech tree are edible, but are very bitter. The nuts are called “beechmast” or simply “beechnuts”.

36. Dim bulb : DODO
The dodo was a direct relative of the pigeon and dove, although the fully-grown dodo was usually three feet tall. One of the reasons the dodo comes to mind when we think of extinction of a species, is that it disappeared not too long ago (last recorded alive in 1681) and humans were the reason for its demise. The dodo lived exclusively on the island of Mauritius and when man arrived, we cut back the forests that were its home. We also introduced domestic animals, such as dogs and pigs, that ransacked the dodo’s nests. The dodo was deemed to be an awkward flightless bird and so the term “dodo” has come to mean a dull-witted person.

37. Sierra and Acadia vehicles : GMCS
GMC is a division of General Motors (GM) established in 1901 that started out as “GMC Truck”.

42. Like many Poe tales : MACABRE
Edgar Allan Poe lived a life of many firsts. Poe is considered to be the inventor of the detective-fiction genre. He was also the first notable American author to make his living through his writing, something that didn’t really go too well for him as he was always financially strapped. In 1849 he was found on the streets of Baltimore, delirious from either drugs or alcohol. Poe died a few days later in hospital at 39 years of age.

44. So-called missing link : APEMAN
The term “missing link” is usually applied to the concept that there existed some form of animal that is a hybrid between apes and humans. The idea that there was some “ape-man” is discounted these days by the scientific community, which now favors the theory of evolution.

48. Dogie catchers : ROPERS
“Dogie” (sometimes “dogy”) is cowboy slang for a motherless calf in a herd.

58. C.T.A. transports : ELS
The Chicago “L” is the second largest rapid transit system in the US, with the New York City Subway being the largest. The “L” is also the second oldest, again with the New York City Subway system having the honor of being around the longest. Note that the official nickname for the system is the “L” (originally short for “elevated railroad”), although the term “El” is also in common use (especially in crosswords as “ELS”). The L is managed by the Chicago Transit Authority (CTA).