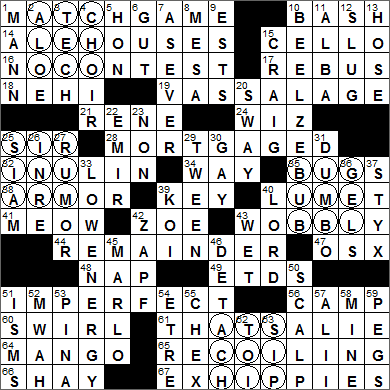 CROSSWORD SETTER: Joel Fagliano
THEME: Ice Cream Swirls
Today’s grid includes four SWIRLS. My (online) grid shows the swirls very poorly, with just circled letters. The print version of the grid better shows each swirl, using heavy borders around the letters. The letters within each swirl, starting from the outside, spell out four flavors that might constitute the swirls in the ice cream:

The four SWIRLED flavors in the grid are:

Today’s Wiki-est, Amazonian Googlies
Across
1. Classic TV show with a celebrity panel : MATCH GAME
“Match Game” is a television game show that had many incarnations. The original run was from 1962 until 1969, and it came back in varying formats four times after that. The best-known host of the show was Gene Rayburn.

15. Yo-Yo Ma’s instrument : CELLO
Yo-Yo Ma is a marvelous American cellist, born in Paris to Chinese parents. Ma started studying the violin when he was very young, working his way up (in size) to the viola and finally to the cello. He has said that he wanted to play the double bass, but it was just too big for his relatively small frame.

17. Picture puzzle : REBUS
A rebus is a puzzle that uses pictures to represent letters and groups of letters. For example, a picture of a “ewe” might represent the letter “U” or the pronoun “you”.

18. Soda brand introduced in 1924 : NEHI
Nehi Corporation was the nickname for the Chero-Cola/Union Bottle Works that introduced the Nehi drink in 1924. Years later the company developed a new brand, Royal Crown Cola (also known as RC Cola). By 1955, RC Cola was the company’s flagship product, so the “Nehi Corporation” became the “Royal Crown Company”. In 1954, RC Cola became the first company to sell soft drinks in cans.

19. Feudal status : VASSALAGE
Feudalism was a legal and military system that flourished in medieval Europe. Central to the system were the concepts of lords, vassals and fiefs. Lords would grant fiefs (land or rights) to vassals in exchange for allegiance and service.

21. Philosopher Descartes : RENE
The great French philosopher Rene Descartes made the famous statement in Latin, “Cogito ergo sum”. This translates into French as “Je pense, donc je suis” and into English as “I think, therefore I am”.

24. Musical set in Oz, with “The” : WIZ
“The Wiz”, the 1975 musical, was written by Charlie Smalls and is an African-American adaptation of Baum’s “The Wonderful Wizard of Oz”. The film version of the stage show was released in 1978, starring Diana Ross as Dorothy and Michael Jackson as the Scarecrow. I haven’t seen it, though. “The Wizard of Oz” scares me, as the flying monkeys creep me out. There, I’ve admitted it in public …

25. “Aaron Burr, ___” (“Hamilton” song with a rhyming title) : SIR
“Hamilton” is a 2015 musical based on the life or US Founding Father Alexander Hamilton, as described in the 2004 biography by Ron Chernow. The representations of the main characters is decidedly ground-breaking. The show is rooted in hip-hop and the main roles such as Hamilton, Thomas Jefferson and George Washington are all played by African-American and Hispanic actors.

28. Like Monopoly deeds that are flipped upside down : MORTGAGED
The commercial game of Monopoly is supposedly a remake of “The Landlord’s Game” created in 1903 by a Quaker woman called Lizzie Phillips. Phillips used her game as a tool to explain the single tax theory of American economist Henry George. The Landlord’s Game was first produced commercially in 1924. The incredibly successful derivative game called Monopoly was introduced in 1933 by Charles Darrow, who became a very rich man when Parker Brothers bought the rights to the game just two years later in 1935.

32. Starchy substance found in some plant roots : INULIN
Inulins are polysaccharides that are used by some plants to store energy. As such, inulin plays a similar role to the starch found in most plants. Examples of plants that use inulin for energy storage are wheat, onion, garlic, banana, asparagus and chicory.

35. Software issues : BUGS
Back in 1947, the famed computer programmer Grace Hopper noticed some colleagues fixing a piece of equipment by removing a dead moth from a relay. She remarked that they were “debugging” the system, and so she has been given credit for popularizing the term.

40. “Network” director Sidney : LUMET
As a movie director Lumet had a great string of celebrated films to his name including “12 Angry Men”, “Dog Day Afternoon”, “Network” and “The Verdict”. Although nominated for the Academy Award for Best Director for each of these films, he never won an individual Oscar. However, the Academy gave Lumet the recognition he deserved in 2004 by presenting him with an Honorary Award.

The movie “Network” was released in 1976. It was directed by Sidney Lumet and stars Peter Finch in his final role, for which he won a posthumous Academy Award. That Oscar for Peter Finch was remarkable in that it was the first time the Best Actor award had been won after the actor passed away, and it was also the first time it had been won by an Australian.

42. Saldana of “Star Trek Beyond” : ZOE
American actress Zoe Saldana played the Na’vi princess in “Avatar”, and Uhura in the 2009 movie “Star Trek”. Saldana seems to pick the right movies, as she is the only actress to have three different films in the top twenty at the box office for three consecutive weeks (“Avatar”, “The Losers” and “Death at a Funeral”).

47. Windows : Microsoft :: ___ : Apple : OS X
Apple introduced the OS X Operating System in 2000. Each version of this operating system has had a code name, and that code name until recently has been a type of big cat. The versions and code names are:

64. Chutney fruit : MANGO
Chutney is a typically southern Asian condiment, made from spices with vegetables or fruit. The term “chutney” comes from the Sanskrit “caṭnī” meaning “to lick”.

66. Rural carriage : SHAY
A chaise is a light carriage with a folding hood that transports one or two people. “Chaise” is the French for “chair”, and takes its name from the “sedan chair” means of transportation. In the US, the name “chaise” evolved into “shay”.

Down
1. Thomas who wrote “Death in Venice” : MANN
Thomas Mann was a German novelist whose most famous work is probably his novella “Death in Venice”, originally published in German in 1912 as “Der Tod in Venedig”. The story was famously adapted for the big screen in 1971, in a movie starring Dirk Bogarde.

2. ___ vera : ALOE
Aloe vera has a number of alternate names that are descriptive of its efficacy as a medicine. These include the First Aid plant, Wand of Heaven, Silent Healer and Miracle Plant.

3. Silicon Valley specialty : TECH
The Santa Clara Valley, just a few miles from me at the south of San Francisco Bay, is better known as “Silicon Valley”. The term “Silicon Valley” dates back to 1971 when it was apparently first used in a weekly trade newspaper called “Electronic News” in articles written by journalist Don Hoefler.

8. Formation with steep cliffs : MESA
“What’s the difference between a butte and a mesa?” Both are hills with flat tops, but a mesa has a top that is wider than it is tall. A butte is a much narrower formation, taller than it is wide.

10. The Devil : BEELZEBUB
Beelzebub is an alternative name for the devil. Beelzebub is often described as a demonic fly, and given the moniker “Lord of the Flies”. It was this phrase that William Golding used as a title for his most famous novel.

11. Duchess of ___ (Goya subject) : ALBA
María Cayetana de Silva was the 13th Duchess of Alba. She was a favorite subject of the Spanish painter Francisco Goya. The duchess is the subject in the famous portraits known as “La maja desnuda” (The Nude Maja) and “La maja vestida” (The Clothed Maja). “Maja” translates from Spanish as “beautiful lady”.

15. Bond player after Brosnan : CRAIG
I have not been a fan of Daniel Craig as James Bond (preferring Sean Connery and Pierce Brosnan in the role). However, I saw “Skyfall” when it first came out and have been won over. “Skyfall” is one of the best Bond films so far, in my humble opinion. And, Adele’s rendition of the title song is an added plus …

Pierce Brosnan is an Irish actor, from Drogheda, north of Dublin. Brosnan’s big break in the US came when he was given the title role in the eighties television show “Remington Steele”. Of course he also played James Bond on the big screen. Brosnan’s first appearance as Bond was in 1995’s “Golden Eye”. He was asked to take the role much earlier, in 1987, but Brosnan couldn’t get out of his contract for “Remington Steele”. Bond was the fifth actor to play Bond, after Sean Connery, George Lazenby, Roger Moore and Timothy Dalton.

22. Sheik’s peer : EMIR
An emir is a prince or chieftain, most notably in the Middle East. In English, emir can also be written as emeer, amir and ameer (watch out for those spellings in crosswords!).

31. Toon that flies with his ears : DUMBO
The 1941 Disney animated film “Dumbo” was made a year after the feature called “Fantasia” was released. “Dumbo” was largely a commercial venture. The film was made quickly and released in theaters as soon as possible, the idea being to recoup the financial losses incurred by “Fantasia”.

33. Lethargic : LOW-ENERGY
Languor, lassitude, lethargy and listlessness are such lovely words, all l-words meaning a lack of physical energy.

37. One hell of a river? : STYX
The River Styx in Greek mythology was the river that formed the boundary between the Earth and the Underworld (or Hades). The souls of the newly dead had to cross the River Styx in a ferry boat piloted by Charon. Traditionally, a coin would be placed in the mouths of the dead “to pay the ferryman”.

40. Feudal figure : LORD
Feudalism was a legal and military system that flourished in medieval Europe. Central to the system were the concepts of lords, vassals and fiefs. Lords would grant fiefs (land or rights) to vassals in exchange for allegiance and service.

45. Drug kingpin on “The Wire” : MARLO
I didn’t watch the HBO series called “The Wire” when it first aired. We ending up buying all five series on DVD and we watched the whole thing a couple of years ago. It’s is a great drama series, and I thoroughly recommend it. Personally, I think that HBO produces some of the best dramas on American television.

53. ___ colada : PINA
“Piña colada” is a Spanish term which translates into “strained pineapple”. The Piña colada cocktail was introduced in the Caribe Hilton San Juan in 1954, and since 1978 it has been the official beverage of Puerto Rico. Yum …

55. Party mix cereal : CHEX
Chex Mix is a party mix that includes Chex cereal as a major ingredient. The first recipe appeared on boxes of Chex cereal in 1952.

58. Seven Dwarfs’ workplace : MINE
Disney’s 1937 masterpiece “Snow White and the Seven Dwarfs” was the first cel-animated feature film. It is still one of the top ten box office hits in North America, adjusting for inflation. The film was a massive, expensive undertaking in the 1930s, and Walt Disney even had to mortgage his house to help with financing.

59. Mastermind game pieces : PEGS
Jotto is a word guessing game for two players. I used to play a game with colored pegs as a kid that works on the same principle that was sold under the name Mastermind.

62. French “you” : TOI
In French, the pronouns “toi” and “vous” both mean “you”, with the former being used with family and friends, and children. “Vous” is more formal, and is also the plural form of “toi”.