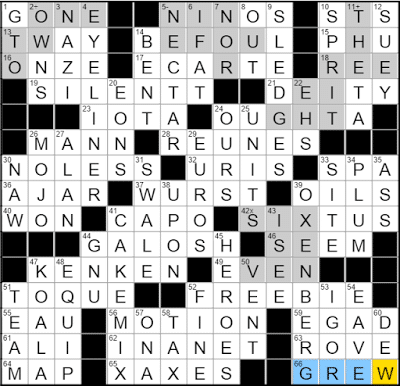 CROSSWORD SETTER: Brendan Emmett Quigley & Joel Fagliano
THEME: KenKen … today’s crossword is designed to evoke a KenKen puzzle. The grid includes four arithmetic symbols beside four numbers in the grid (i.e. 2÷, 5-, 11+, 42x). I’m not a KenKen solver myself, but the trick with the crossword is to apply the arithmetic operation designated to the two nearby numbers spelled out in the shaded squares, and the answer is the number beside the arithmetic symbol (i.e. the answer/clue number).

Today’s Wiki-est, Amazonian Googlies
Across
5. Boys in Baja : NINOS
Baja California is both the most northern and the most western of the Mexican states. The name translates from Spanish as “Lower California”.

15. 1954’s Battle of Dien Bien ___ : PHU
The Battle of Điện Biên Phủ was fought in Vietnam in 1954 at the height of the First Indochina War. The war was between the occupying French forces and the Viet Minh revolutionaries, with the battle resulting in a resounding defeat for the French. The war ended with the signing of the 1954 Geneva Accords just a few months after the battle, after which France made a complete withdrawal from Vietnam. There was no peace though, with the Second Indochina War following a few years later, better known in the US as the Vietnam War.

17. Relative of euchre : ECARTE
Écarté is a card game that comes to us from France, with a name that translates into ‘discarded”. Écarté is a game like whist but is played with a stripped-down deck and involves only two players.

19. Christmas feature? : SILENT T
The letter T in the word “Christmas” is silent.

21. Mars or Neptune : DEITY
Mars was the god of war in Ancient Rome. Mars was viewed as the father of the Roman people, and the father of Romulus and Remus, the twin brothers who founded Rome according to Roman mythology..

Neptune was the Roman god of the sea and of freshwater. He was sometimes known as “Neptunus Equester” as he was also the god of horses and patron of horse-racing.

23. Letter after 11-Down : IOTA
(11D. Letter before 23-Across : THETA)
Iota is the ninth letter in the Greek alphabet. We use the word “iota” to portray something very small as it is the smallest of all Greek letters.

“Me and Earl and the Dying Girl” is a 2015 film. Jesse Andrews wrote both the screenplay for the movie and the 2012 novel from which the film was adapted. It’s all about an awkward teen who reluctantly befriends a fellow student who has been diagnosed with leukemia.

33. Place to get a wrap : SPA
The word “spa” migrated into English from Belgium, as Spa is the name of a municipality in the east of the country that is famous for its healing hot springs. The name “Spa” comes from the Walloon word “espa” meaning “spring, fountain”.

36. Open a tad : AJAR
Our word “ajar” is thought to come from Scottish dialect, in which “a char” means “slightly open”.

Back in the 1800s “tad” was used to describe a young child, and this morphed into our usage of “small amount” in the early 1900s. The original use of “tad” for a child is very likely a shortened version of “tadpole”.

37. Sausage served with kraut : WURST
“Wurst” is simply a German word for “sausage”.

41. Tool that raises a guitar’s pitch : CAPO
A capo is a clamp-like device that is placed around the neck of a guitar to shorten the strings, and hence raise the pitch. The full name, rarely used these days, is “capo tasto”, which is Italian for “head tie”.

42. Name used by five popes : SIXTUS
I suppose it’s a little ironic that there were only five popes who took the name “Sixtus”, and not six. The Sistine Chapel, in the Pope’s residence in Rome, takes its name from Pope Sixtus IV who was responsible for restoring the old Capella Magna in the 15th century. It was about a century later (1508-1512) that Michelangelo painted the ceiling of the Sistine Chapel under the patronage of Pope Julius II.

47. Newspaper puzzle suggested by this crossword’s gray squares : KENKEN
KenKen is an arithmetic and logic puzzle invented quite recently, in 2004 by a Japanese math teacher named Tetsuya Miyamoto. “Ken” is the Japanese word for “cleverness”.

51. Chef’s hat : TOQUE
A toque was a brimless style of hat that was very fashionable in Europe in the 13th to 16th centuries. Nowadays we associate toques with chefs, as it is the name given to a chef’s hat (called a “toque blanche” in French, a “white hat”). A chef’s toque is quite interesting. Many toques have exactly 100 pleats, often said to signify the number of ways that an egg can be cooked.

56. Subject of three laws of Newton : MOTION
Sir Isaac Newton’s three laws of motion are the basis of classical mechanics. The three laws define the relationship between a body and the forces acting on that body, and its resulting motion.

63. Republican strategist Karl : ROVE
Whatever your politics, you have to give Karl Rove credit for engineering both presidential election victories for President George W. Bush. Rove is a Christmas baby, born on December 25, 1950.

64. Uber app feature : MAP
Uber is a ridesharing service that was founded in 2009 and is based in San Francisco. The service is somewhat controversial and has been described as an illegal taxicab operation. Central to Uber’s service is the company’s mobile app, which can use the client’s GPS location to help find the nearest available ride. Personally, I love the service and only have had good experiences …

Down
1. Old Pontiac muscle car : GTO
The Pontiac GTO was produced by GM from 1964 to 1974, and again by a GM subsidiary in Australia from 2004 to 2006. The original GTO’s design is credited to Pontiac chief engineer at the time John DeLorean, who later was found the DeLorean Motor Company.

9. Tools used to break concrete : SLEDGES
A sledgehammer is a big hammer, used to apply a lot of force. The word “sledgehammer” comes from the Anglo Saxon “Slaegan” meaning “to strike violently”. “Slaegan” is also the root of the words “slag”, “slay” and “slog”.

10. Nautical pole : SPRIT
A sprit is a pole that extends out from a mast, often supporting a special sail called a spritsail.

11. Letter before 23-Across : THETA
(23A. Letter after 11-Down : IOTA)
The Greek letter theta is the one that looks like a number zero with a horizontal line in the middle.

12. Chop ___ : SUEY
Many believe that the Chinese dish known as chop suey was invented in America, by Chinese immigrants. In fact, by the time it showed up in the US it already existed in the Taishan district of Guangdong in southeast China, the origin of many of those immigrants. “Chop suey” translates as “assorted pieces”, and is made up of some meat and eggs quickly cooked with vegetables in a thickened sauce.

20. Time since the Big Bang : EONS
Geological time is divided into a number of units of varying lengths. These are, starting from the largest:

According to the Big Bang theory, the universe came into being just under 14 billion years ago. The theory tells us that the universe started out as a hot and dense mass that began to expand rapidly (in a “big bang”). Within three minutes of the “bang”, the universe cooled so that energy was converted into subatomic particles like protons, electrons and neutrons. Over time, subatomic particles turned into atoms. Clouds of those atoms formed stars and galaxies.

25. Syllabus divisions : UNITS
“Syllabus” is the Latin word for “list”.

27. Singer Jackson with 26 #1 country hits : ALAN
Alan Jackson is a country music singer, and a bit of an author too. Jackson married his high school sweetheart in 1979, but they had a parting of the ways about twenty years later due to the pressures on the marriage from Jackson’s career. The pair reconciled, and Jackson wrote a book describing the relationship he has with his wife and his commitment to Christianity. The book is called “It’s All About Him: Finding the Love of My Life”, and it topped the New York Times Bestseller List.

29. € € € : EUROS
The euro sign (€) looks like a letter C, but with two horizontal lines drawn across the middle. Inspiration for the design comes from the Greek letter epsilon.

31. Geographic depression : SWALE
A swale is a narrow tract of low-lying land that is usually wet or marshy. A swale can be naturally occurring or man-made. One might create a swale to help manage drainage of adjacent land.

34. Professor ___, Clue suspect : PLUM
Clue is another board game that we knew under a different name growing up in Ireland. Outside of North America, Clue is marketed as “Cluedo”. Cluedo was the original name of the game, introduced in 1949 by the famous British board game manufacturer Waddingtons. There are cute differences between the US and UK versions. For example, the man who is murdered is called Dr. Black (Mr. Boddy in the US), one of the suspects is the Reverend Green (Mr. Green in the US), and the suspect weapons include a dagger (a knife in the US), a lead pipe (lead piping in the US) and a spanner (a wrench in the US). I think it’s a fabulous game, a must during the holidays …

41. Betty Crocker product : CAKE MIX
Betty Crocker was introduced by the Washburn Crosby Company (now part of General Mills) in 1921. “Crocker” was chosen in honor of William Crocker who was one of the company’s directors. “Betty” was selected simply because it was considered a bright, all-American name. Betty’s original job was to sign her name on correspondence arising out of consumer product questions, but soon she evolved into a very successful brand name.

44. Prey for a lion : GNU
The gnu is also known as the wildebeest, and is an antelope native to Africa. “Wildebeest” is actually the Dutch word for “wild beast”.

47. Australian “bear” : KOALA
The koala bear really does look like a little bear, but it’s not even closely related. The koala is an arboreal marsupial and a herbivore, native to the east and south coasts of Australia. Koalas aren’t primates, and are one of the few mammals other than primates who have fingerprints. In fact, it can be very difficult to tell human fingerprints from koala fingerprints, even under an electron microscope. Male koalas are called “bucks”, females are “does”, and young koalas are “joeys”. I’m a little jealous of the koala, as it sleeps up to 20 hours a day …

53. Frankenstein’s aide : IGOR
In the world of movies, Igor has been the assistant to Dracula, Frankenstein and Young Frankenstein among others. Igor is almost invariably portrayed as a hunchback.

58. Subject for Grover Norquist : TAX
Grover Norquist is the president of the taxpayer advocacy group “Americans for Tax Reform” (ATR). The ATR’s goal is “a system in which taxes are simpler, flatter, more visible, and lower than they are today.” 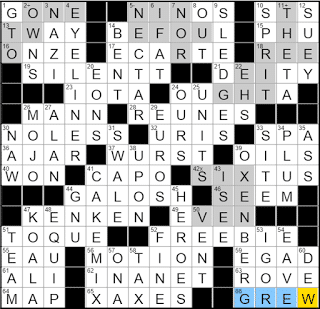