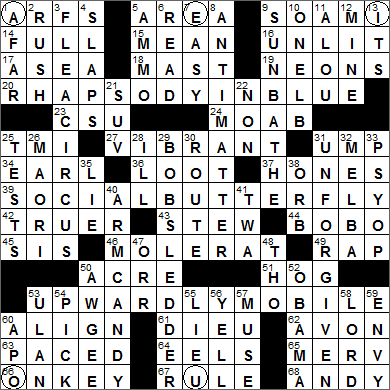 CROSSWORD SETTER: Dan Bischof & Jeff Chen
THEME: AEIOU and Y … each of today’s themed answers one in exactly one instance of each of the vowels, including Y, because the vowels are “A, E, I, O, U and sometimes Y”. To help us along, there is an example of each vowel circled in the grid, as well as a final across-answer that can be read as “AND Y”.

20A. Gershwin composition in United Airlines ads : RHAPSODY IN BLUE
39A. Person about town : SOCIAL BUTTERFLY
53A. Ascending in economic class : UPWARDLY MOBILE

Today’s Wiki-est, Amazonian Googlies
Across
19. Bright night lights : NEONS
The basic design of neon lighting was first demonstrated at the Paris Motor Show in 1910. Such lighting is made up of glass tubes containing a vacuum into which has been introduced a small amount of neon gas. When a voltage is applied between two electrodes inside the tube, the neon gas “glows” and gives off the familiar light.

20. Gershwin composition in United Airlines ads : RHAPSODY IN BLUE
“Rhapsody in Blue” is one of the most popular works by the great George Gershwin. The piece has a famous clarinet glissando at its opening, but is a work for solo piano and orchestra. Gershwin himself played the piano at its premiere in 1924. We can’t be certain how that original “Rhapsody” sounded as Gershwin improvised some of what he was playing, and didn’t write out the piano part until after the first performance.

24. City south of Utah’s Arches National Park : MOAB
Moab is a city in eastern Utah that attracts a lot of visitors each year, mainly those heading for Arches and Canyonlands National Parks, which are nearby.

25. “That’s overly personal about yourself, don’t you think?!” : TMI
Too much information! (TMI)

34. ___ of Sandwich : EARL
Meats placed between slices of bread was first called a sandwich in the 18th century, named after the Fourth Earl of Sandwich. The Earl was fond of eating “sandwiches” while playing cards at his club.

44. Classic clown name : BOBO
Bobo the Clown was the stage name of Chester Barnett who worked the circus circuit from the 1920s to the 1970s. Barnett gave himself the nickname “Bobo” when he was a child, using it for a persona that he adopted when he ran around the house wearing a paper bag on this head, with two holes cut to allow him to see.

46. “Naked” rodent : MOLE-RAT
The naked mole-rat is an ugly-looking creature, I must say. Native to parts of East Africa, the naked mole-rat has very little hair and lives much of its life underground, hence its name. One reason that scientists are very interested in naked mole-rats is that they are exceedingly resistant to cancer. Discoveries made while studying the species led to the journal “Science” declaring the naked mole-rat “Vertebrate of the Year” for 2013.

49. Genre of 50 Cent and André 3000 : RAP
Rap star 50 Cent’s real name is Curtis James Jackson III, and is from South Jamaica in Queens, New York. 50 Cent had a rough life starting out, first dealing drugs at the age of 12. He dropped his illegal activities to pursue a rap career, but still fell victim to an assailant who pumped nine bullets into him. The alleged shooter was himself shot three weeks later, and died. 50 Cent’s alleged attacker was a bodyguard and close friend of Mike Tyson.

50. Winnie-the-Pooh’s Hundred ___ Wood : ACRE
Hundred Acre Wood is where Winnie the Pooh lives with his friends. According to a map illustrating the books by A. A. Milne, Hundred Acre Wood is part of a larger forest, with Owl’s house sitting right at the center.

62. Stratford-upon-___ : AVON
There are actually four rivers called the Avon in England, but “Shakespeare’s Avon” lies mainly in Warwickshire. The name “Avon” comes from the Old English word for a river, “abona”. Stratford-upon-Avon was William Shakespeare’s birthplace.

65. Griffin who created “Wheel of Fortune” : MERV
Merv Griffin was quite the entertainer, truly a mogul in the business. He started his career as a singer on the radio during the big band era. In the sixties he hosted his own talk show, and then famously developed such great game shows as “Jeopardy!” and “Wheel of Fortune”.

68. “Toy Story” boy … or, with the circled letters, a hint to 20-, 39- and 53-Across : ANDY (or AND Y)
1995’s “Toy Story” was the world’s first feature-length computer-animated movie. “Toy Story” was also the studio Pixar’s first production. The main roles in the film are Woody and Buzz, voiced by Tom Hanks and Tim Allen respectively. Hanks was the first choice to voice Woody, and Allen was asked to voice Buzz after Billy Crystal turned down the role. Woody and Buzz are toys owned by a boy named Andy Davis. Andy was voiced by John Morris who is now an actor, having graduated in 2007 from the UCLA School of Theater, Film & Television.

4. Three Stooges’ hits? : SLAPS
If you’ve seen a few of the films starring “The Three Stooges” you’ll have noticed that the line up changed over the years. The original trio was made up of Moe and Shemp Howard (two brothers) and Larry Fine (a good friend of the Howards). This line up was usually known as “Moe, Larry and Shemp”. Then Curly Howard replaced his brother when Shemp quit the act, creating the most famous trio, “Moe, Larry And Curly”. Shemp returned when Curly had a debilitating stroke in 1946, and Shemp stayed with the troupe until he died in 1955. Shemp was replaced by Joe Besser, and then “Curly-Joe” DeRita. When Larry Fine had a stroke in 1970, it effectively marked the end of the act.

5. Bullets, informally : AMMO
The word “munitions” describes materials and equipment used in war. The term derives from the Latin “munitionem” meaning “fortification, defensive wall”. Back in the 17th century, French soldiers referred to such materials as “la munition”, a Middle French term. This was misheard as “l’ammunition”, and as a result we ended up importing the word “ammunition” (often shortened to “ammo”), a term that we now use mainly to describe the material fired from a weapon.

8. “Star Trek” warp drive fuel : ANTIMATTER
In the world of particle physics, antimatter is made up of particles that have the same mass as particles of ordinary matter, but with the opposite charge and quantum spin. Mixing matter and antimatter causes the annihilation of both, with a release of energy equal to the mass of the particles according to Einstein’s equation E=mc2.

10. 16 oz. : ONE LB
The unit of mass that we know today as a “pound” is descended from the old Roman unit of weight known as a “libra”. That “libra” connection is why we abbreviate “pound” to “lb”. The name “pound” though comes from the Latin “pondo” meaning “weight”. Our term “ounce” comes from the Latin “uncia”, which was 1/12 of a Roman “libra”.

11. Baseball’s Felipe : ALOU
Felipe Alou is a former professional baseball player and manager. Alou managed the Montreal Expos from 1992 to 2001, and the San Francisco Giants from 2003 to 2006. Alou was born and raised in the Dominican Republic and came to the US to play for the Giants in 1955. Felipe’s brothers Matty and Jesús followed him to the US, and into Major League baseball.

21. Hyundai’s Santa Fe or Tucson : SUV
The term SUV, an initialism standing for Sports Utility Vehicle, was introduced by our marketing friends. Using the term Sports Utility Vehicle was a very clever way to get us to pay a lot of money for what was essentially a station wagon on a truck chassis, or at least it was back then.

22. Sine qua ___ : NON
“Sine qua non” is a Latin phrase that we use to mean “the essential element or condition”. The literal translation is “without which not”. One might say, for example, “a challenging crossword is the sine qua non of a good newspaper”. Well, crossword fans might say that …

26. Like about 15% of New Zealanders : MAORI
The Māori are the indigenous people of New Zealand. The Māori are eastern Polynesian in origin and began arriving in New Zealand relatively recently, starting sometime in the late 13th century. The word “māori” simply means “normal”, distinguishing the mortal human being from spiritual entities.

29. Winter Olympian who may go 90 m.p.h. : BOBSLEDDER
“Bobsleds” are so called because competitors in the sport originally would bob in and out of the sled in order to increase its speed.

31. 1992 Clint Eastwood western that won Best Picture : UNFORGIVEN
“Unforgiven” is a 1992 film directed and produced by, and starring, Clint Eastwood. It’s a Western, with a storyline that goes deeper than the average “shoot-’em-up”. Eastwood has a great supporting cast that includes Gene Hackman, Morgan Freeman and Richard Harris. “Unforgiven” was only the third Western movie to win a Best Picture Oscar, after “Cimarron” in 1931, and “Dances with Wolves” in 1990. Eastwood stated that “Unforgiven” would be his last Western.

32. ___ toast : MELBA
Melba toast is a dry, thinly sliced toast that is usually served with soup or salad. Melba toast was created by chef Auguste Escoffier for opera singer Dame Nellie Melba, for who he also created the dessert called Peach Melba.

33. Military initiative that seeks to influence the enemy’s mind, informally : PSYOP
Psychological Operations (PSYOP) is a contemporary name for propaganda, the “winning of hearts and minds in a combat zone.

41. Old “Up, up and away” carrier : TWA
Trans World Airlines (TWA) was a big carrier in the US, but was perhaps even more recognized for its extensive presence in Europe and the Middle East. For many years, especially after the collapse of Pan-Am, TWA was considered the unofficial flag carrier for the US. The company started in 1930, the product of a forced merger of Transcontinental Air Transport and Western Air Express. The Transcontinental and Western Air that resulted (the original meaning of the acronym TWA) was what the Postmaster General wanted, a bigger airline to which the Postal Service could award airmail contracts.

The song “Up, Up and Away”, famously used by TWA in its advertising, was released by the 5th Dimension in 1967.

47. Bobby who won three straight N.H.L. M.V.P. awards : ORR
Bobby Orr is regarded as one of the greatest hockey players of all time. By the time he retired in 1978 he had undergone over a dozen knee surgeries. At 31 years of age, he concluded that he just couldn’t skate anymore. Reportedly, he was even having trouble walking …

52. Only U.S. president whose surname is more than 50% vowels : OBAMA
Despite rumors to the contrary, I am pretty sure that Barack Hussein Obama II was indeed born in Hawaii. President Obama was born on August 4, 1961 at Kapi’olani Maternity & Gynecological Hospital in Honolulu, Hawaii.

53. ___ Bator, Mongolia : ULAN
The name “Ulan Bator” translates from Mongolian as “the Red Hero”, and is Mongolia’s capital city. The “Red Hero” name was chosen in honor of the country’s national hero, Damdin Sükhbaatar. Sükhbaatar fought alongside the Soviet Red Army in the fight for liberation from Chinese occupation.