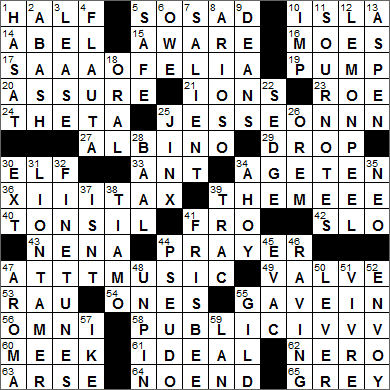 CROSSWORD SETTER: Timothy Polin
THEME: 1+3 Letter Sounds … each of today’s themed answers uses a combination of one letter followed by three letters to replace one word. We need to sound out the letter combinations to hear the answer:

16. TV tavern named after its proprietor : MOE’S
The regulars on “The Simpsons” hang out at Moe’s Tavern, which is named for and run by Moe Szyslak. The most popular beer at Moe’s is Duff Beer. The name “Duff” is a reference to the real-life Duffy’s Tavern that used to be East 13th Street in Eugene, Oregon. “The Simpsons” creator Matt Groening used to frequent Duffy’s regularly, and Moe’s looks very much like Duffy’s in terms of decor and floorplan.

17. Charles Lamb collection first published in 1823 : S-AAA (ESSAYS) OF ELIA
Charles Lamb was an English writer best known for a collection of essays called “Essays of Elia” and “Tales from Shakespeare”, a children’s book that he wrote with this sister Mary Lamb. Both Charles and Mary suffered from mental illness. Mary’s condition was so bad that she stabbed and killed her mother in a manic rage.

23. New school? : ROE
Fish roe might turn into a school of adult fish.

In Greek mythology, Thanatos was the personification of death. The Roman equivalent was the god named Mors.

25. Track star known as the Buckeye Bullet : JESSE (OWENS) O-NNN
Jesse Owens is famous for winning four gold medals at the Berlin Olympic Games in 1936, much to the chagrin of Adolph Hitler. Jesse’s real name was James Cleveland Owens, and he went by “JC” as a child. However, his Alabama accent was misconstrued at school when his family moved to Cleveland, so teachers and classmates called him “Jesse” instead of “JC”, and the name stuck. Owens attended Ohio State University, where his athletic prowess earned him the nickname “the Buckeye Bullet”.

27. Pink elephant, e.g. : ALBINO
An albino elephant is sometimes referred to as a white elephant, although the actual color is a reddish-brown that turns quite pink when wet.

The first documented use of the phrase “seeing pink elephants”, a euphemism for being drunk, is by Jack London in his autobiographical novel “John Barleycorn”. In London’s description, drinkers not only see pink elephants, but also blue mice.

39. Annual gala usually held in September : THE (EMMYS) M-EEE
The Emmy Awards are the television equivalent of the Oscars in the world of film, the Grammy Awards in music and the Tony Awards for the stage. Emmy Awards are presented throughout the year, depending on the sector of television being honored. The most famous of these ceremonies are the Primetime Emmy Awards and the Daytime Emmy Awards. The distinctive name of “Emmy” is a softened version of the word “immy”, the nickname given to the video camera tubes found in old television cameras.

40. Lump in the throat : TONSIL
The palatine tonsils are located at the back of the human throat. The exact role that tonsils play isn’t completely understood, but it is known that they are in the first line of defense in the body’s immune system. They provide some level of protection against pathogens that are ingested and inhaled.

43. One-named German singer who was a one-hit wonder : NENA
Nena is a German singer (“Nena” became the name of her band as well) who had a big hit with one of my favorite songs of the eighties “99 Luftballons”. The English translation of the German title (“99 Red Balloons”) isn’t literal, with the color “red” added just so that the title had the right number of syllables for the tune. “Luftballon” is the name given to a child’s toy balloon in German.

47. Prince and Journey output : A-TTT (EIGHTIES) MUSIC
The singer Prince was born in Minneapolis, and he lives there to this day. He took his stage name from his father, a jazz musician who used the name Prince Rogers when performing. At one point in his career, Prince used a stage name that was just a symbol that didn’t have a pronounceable name. Later the symbol was dubbed “Love Symbol #2”.

53. Novelist Santha Rama ___ : RAU
Santha Rama Rau was a travel writer from India who lived much of her life in the US. As well as writing her own books, Rau also adapted for the stage the E. M. Forster novel “A Passage to India”.

55. Cried “Uncle!” : GAVE IN
To “say uncle” is an American expression meaning to submit or yield. Its usage dates back to the early 1900s, but nobody seems to know how “uncle!” came to mean “stop!”

56. Upscale hotel chain : OMNI
Omni Hotels & Resorts is headquartered in Irvine, California and has properties in the US, Canada and Mexico.

58. Informal group that includes the Universities of California, Michigan and Virginia : PUBLIC (IVIES) I-VVV
A “public ivy” is a public university that has the reputation of delivering an Ivy League education, but at the price of a public school. The term was coined by Richard Mill in his 1985 book “Public Ivies: A Guide to America’s Best Public Undergraduate Colleges and Universities”. Moll’s original list of such schools was:

61. Opposite of dystopian : IDEAL
A dystopia is an imaginary community in which the residents live unhappily and in fear. “Dystopia” is the opposite of “utopia”. One example of such a society is that described by George Orwell in “Nineteen Eighty-Four”.

62. Son of Agrippina : NERO
The Roman emperor Nero had quite the family life. When Nero was just 16-years-old he married his step-sister Claudia Octavia. He also had his mother Agrippina and step-brother Britannicus executed.

63. Oxford bottom : ARSE
The city of Oxford is in southeastern England, and is most famous as the home of the University of Oxford, the oldest university in the English-speaking world.

Well, the word “arse” would never make it into a crossword in the British Isles as it would be considered too rude. I have a similar reaction to the word “shag” as in “The Spy Who Shagged Me”. The film would never have been released with that name in the UK.

Down
4. Mexican rolled tortilla dish : FLAUTA
A “flauta”, also known as a “taquito”, is a rolled tortilla with some kind of filling that has been deep-fried until it is crispy.

8. Melodious : ARIOSO
An arioso (plural “ariosi”) is a solo vocal piece in a classical work such as an opera or an oratorio. An arioso’s structure lies somewhere between that of a full-blown aria and speech-like recitative.

13. Resort near Snowmass : ASPEN
Aspen, Colorado used to be known as Ute City, with the name change taking place in 1880. Like many communities in the area, Aspen was a mining town, and in 1891 and 1892 it was at the center of the highest production of silver in the US. Nowadays of course, it’s all about skiing and movie stars.

The Snowmass ski area is located near the town of Aspen in Colorado that opened in 1967. There are more vertical feet of ski area in snowmass than in any other resort in the US.

18. Viva voce : ORAL
“Viva voce” translates literally from Latin as “with living voice”, and we use the phrase today to mean “by word of mouth”. The term might also be used for an oral exam in university, or for a voice vote in a governing assembly.

22. Bit of swamp flora : SEDGE
Sedges are a family of plants that resemble grasses and rushes. Sedges are more properly called Cyperaceae.

25. Bit of black magic : JINX
A jinx is a charm or a spell, and the word “jinx” comes from an older word “jyng” from the 17th-century. A “jyng” was another word for the wryneck, a type of bird much used in witchcraft.

26. City west of Provo Peak : OREM
Orem, Utah was originally known as “Sharon” (a Biblical name), then “Provo Bench”, and in 1914 it was given the family name of a local railroad operator called “Orem”. Orem gave itself the nickname “Family City USA” and sure enough in 2010, “Forbes” rated Orem the 5th best place in the country to raise a family.

28. False divinity : BAAL
The name “Baal” was used for several gods and sometimes human officials by ancient Semitic peoples. In the Hebrew Bible, Baal is notably cited as a false god. As a result, we sometimes use the term “baal” today to mean a false god or an idol.

41. Flying saucer : FRISBEE
The Frisbee phenomenon started back in 1938 with a couple who had an upturned cake pan that they were tossing between each other on Santa Monica Beach in California. They were offered 25 cents for the pan on the spot, and as pans could be bought for 5 cents, the pair figured there was a living to be earned.

52. Diplomat : ENVOY
An envoy (also “envoi”) is a short closing stanza in some works of poetry.

55. Impart a false brilliance to : GILD
“To gild” is a to coat with cold. The phrase “to gild the lily” means to add unnecessary ornamentation, to try to improve something that is already ideal.