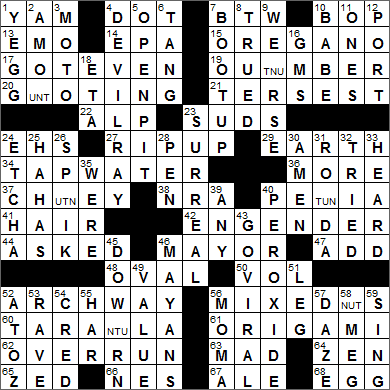 CROSSWORD SETTER: Xan Vongsathorn
THEME: Mixed Nuts … Merry Christmas, everyone! W
e have a rebus puzzle today, with each rebus square occupied by the letters N-U-T all MIXED up:

Today’s Wiki-est, Amazonian Googlies
Across
1. Cassava lookalike : YAM
The cassava plant is a woody shrub native to South America grown largely for its carbohydrate-rich tubers. In fact, the cassava is the third largest food source of carbohydrates (for humans) in the world. Ordinarily, that carbohydrate is extracted from the plant, dried as flour and is called tapioca.

7. Bit of texting shorthand : BTW
By the way (BTW)

10. Charlie Parker genre : BOP
Charlie Parker was a Jazz saxophonist, who was often just called “Bird” or “Yardbird”. He was a leader in the development of the style of jazz called “bebop”, which gained popularity in the forties. Charlie Parker had a rough life outside of music. He was a heroin addict, and a heavy drinker. When he died, the coroner who performed his autopsy estimated his age as between 50 and 60 years old based on the appearance of his body and condition of his organs. He was actually 34-years-old when he died in a New York City hotel room in 1955.

13. Like a style with eyeliner and long bangs : EMO
The musical genre of “emo” originated in Washington D.C. in the 80s, and takes its name from “emotional hardcore”. Not my cup of tea …

“Bangs” is another word that caught me out when I arrived in the US. “Bangs” back in Ireland are called “a fringe”. Apparently the US term is derived from the hair on horses somehow.

22. Backdrop for Chamonix : ALP
Chamonix-Mont-Blanc is on the eastern border of France, in the Alps. Famously it was the site of the 1924 Winter Olympics, the first ever Winter Games.

37. Samosa topping : CHUTNEY
A chutney is typically southern Asian condiment, made from spices with vegetables or fruit. The term “chutney” comes from the Sanskrit “caṭnī” meaning “to lick”.

40. Flowery girl’s name : PETUNIA
The flowering plants known as petunias are in a genus that related to the tobacco plant. The name “petunia” comes from the obsolete French word “petun” meaning “tobacco plant”.

52. Keystone site : ARCHWAY
The keystone of an arch is the last piece put in position, the placement of which allows the arch to bear weight. The keystone sits right at the apex.

60. Hairy menace : TARANTULA
Tarantulas are spider-like arachnids that are usually quite hairy. The original tarantula was a type of wolf spider found in Europe, found near the southern Italian town called Taranto.

61. Artwork from a folder : ORIGAMI
Origami is the traditional Japanese art form of paper folding. The best-known example of the craft is the paper crane. The word “origami” is derived from “ori“ (folding) and “kami” (paper).

64. ___ state : ZEN
Zen is a Buddhist school that developed its own tradition in China back in the 7th century AD. Zen is a Japanese spelling of the Chinese word “chan”, which in turn derives from the Sanskrit word “dhyana” meaning “meditation”.

65. What an English organization lacks? : ZED
The letter named “zed” has been around since about 1400, and derives from the Greek letter zeta. The spelling and pronunciation of “zee” used in America today first popped up in the 1670s.

“Duck Hunt” is video game. Not for me though …

Down
1. One doing safe work? : YEGG
“Yegg” is a slang word for a burglar and often for a safe-cracker. The origin of the term appears to be unknown.

4. Aquarium giant : DEVIL RAY
There are several species of fish called devil ray, all belonging to the genus Mobula.

5. Like some mining and barbecues : OPEN-PIT
Open-pit mining is the extraction of of rock and minerals from the earth by the removal from an open pit. This is compared with the alternative form of mining that requires tunnelling into the ground. A quarry is an example of an open-pit mine, one that produces common building materials.

7. Start, as a computer : BOOT UP
The verb “to boot” as used in the world of computers comes from the phrase “pull oneself up by one’s bootstraps”. The idea is that the software that has to be loaded before a computer can do anything useful is called a “bootstrap load”.

12. After-dinner serving : PORT
The city of Oporto in Portugal gave its name to port wine in the late 1600s, as it was the seaport through which most of the region’s fortified red wine was exported.

24. ___ Sketch : ETCH A
Etch A Sketch was introduced in 1960. The toy was developed in France by inventor André Cassagnes.

26. Startling newsmaker of 10/4/1957 : SPUTNIK
The Soviet Union launched the Sputnik satellite towards the end of 1957, the first in a series of SPACE missions. That first satellite was just a “ball” trailing four antennas. The ball was only 23 inches in diameter. Sputnik 2 was launched just a month later, and carried the first living passenger into orbit, a dog called Laika. The word “sputnik” means “co-traveller” in Russian.

31. Feature of Rome’s Pantheon : ROTUNDA
In architecture, a rotunda is name given to a building with a circular ground plan. Often the building has a dome, but that isn’t a strict requirement for a “rotunda”. The term can also refer to a round room within a building. The most famous example in this country is the Rotunda in the US Capitol building in Washington, D.C.

46. Ancient pyramid builders : MAYANS
The Maya civilization held sway in Central America and Mexico from about 350 AD until the arrival of the Spanish in the 1500s.

54. Props on the street : CRED
“Street cred” is slang for “street credibility”, of which I have none …

56. Home to “The Persistence of Memory,” informally : MOMA
The founding of the Museum of Modern Art (MoMA) in New York City was very much driven by Abby Aldrich Rockefeller, the wife of John D. Rockefeller, son of the oil magnate. Working with two friends, Abby managed to get the museum opened in 1929, just nine days after the Wall Street crash. The MoMA’s sculpture garden bears the name of Abby Aldrich Rockefeller, and has done so since 1949.

“The Persistence of Memory” is probably Salvador Dalí’s most famous work, featuring the celebrated “melting clocks”. And you can see it in the MoMA in New York City.

58. Apple pie seasoning : NUTMEG
The fruit of the nutmeg tree yields two very different spices. What we call “nutmeg” comes from the seed of the tree. “Mace” is the dried covering of the seed.