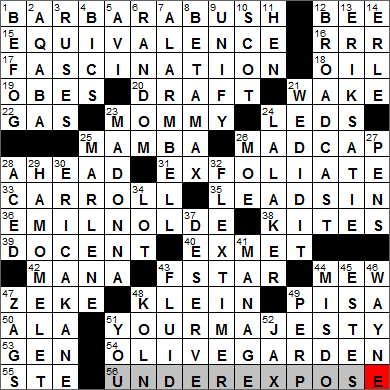 Today’s Wiki-est, Amazonian Googlies
Across
1. Her 1994 memoir has the chapter “Desert Storm” : BARBARA BUSH
Barbara Bush (nee Pierce) is the wife of former President George H. W. Bush. The couple met at a Christmas dance in Andover, Massachusetts when Barbara was 16 years old. They married four years later in 1945 while the future president was home on leave from the US Navy. George Bush was torpedo bomber pilot who flew 58 combat missions during WWII.

19. U.K. honours : OBES
The Most Excellent Order of the British Empire is an order of chivalry in the UK that was established in 1917 by King George V. There are five classes within the order, which are in descending seniority:

24. Display options, briefly : LEDS
A Light Emitting Diode (LED) is a specialized form of semiconductor that when switched on releases photons (light). LEDs are getting more and more popular and have moved from use in electronic equipment to use as a replacement for the much less efficient tungsten light bulb. I replaced all of my tungsten Xmas lights last year and saved a lot on my electricity bill.

25. Serpent with a Zulu name : MAMBA
The mamba, and most famously the black mamba, is a highly venomous snake that used to be responsible for a great number of fatalities before anti-venoms became available. Mamba venom is a deadly mix of neurotoxins that attack the nervous system, and cardiotoxins that attack the heart so a bite, if left untreated, causes the lungs and the heart to shut down.

31. Use pumice on, perhaps : EXFOLIATE
Pumice is volcanic rock that is formed by lava cooling, but with bubbles in it due to water and carbon dioxide frothing out of the lava as it cools. Because of the frothy structure, pumice is relatively light and is a great thermal insulator. As such, it is used in construction to make insulating breeze blocks. Pumice may also float in water.

33. He wrote of a “vorpal blade” : CARROLL
“Vorpal blade” and “vorpal sword” are phrases used by Lewis Carroll in his nonsense poem “Jabberwocky”.

Here are the first two verses of “Jabberwocky” by Lewis Carroll, probably the one poem that we all just loved learning to recite at school:

36. Member of the German Expressionist group Die Brücke : EMIL NOLDE
Emil Nolde was a German Expressionist painter. He was actually born Emil Hansen, near the village of Nolde in the Prussian Duchy of Schleswig in 1867. Hansen officially changed his name to Nolde on the occasion of his marriage in 1902.

“Die Brücke” (German for “the bridge”) was a group of expressionist artists that got together in 1905 in Dresden, Germany. Founding members of the group were Fritz Bleyl, Erich Heckel, Ernst Ludwig Kirchner and Karl Schmidt-Rottluff.

39. Exhibit explainer : DOCENT
Museum docents are people who serve as guides for visitors to their institutions, usually providing their services for free. The term “docent” comes from the Latin “docere” meaning “to teach”.

40. Strawberry, for one : EX-MET
Darryl Strawberry is a former Major League Baseball player who was very successful playing with the both the New York Mets and the New York Yankees. Strawberry’s success on the field was matched with a colorful reputation of the field. He was suspended by league in 1995 for the use of cocaine. I remember seeing him play at a minor league game in Syracuse around that time, as he worked his way back into the majors.

42. Tom Clancy’s “Every ___ Tiger” : MAN A
Tom Clancy’s 1999 book “Every Man a Tiger” is a study of all aspects of command during Operation Desert Storm and Desert Shield.

43. Polaris or Procyon : F STAR
Stars are usually classified based on the color of the light that they emit. These classifications are, from hottest to coolest, O, B, A, F, G, K and M. One way to remember the order of these letters is to use the mnemonic “Oh, be a fine girl, kiss me”. The colors of these stars range from blue (class O) to red (class M). Our sun is class G, a yellow star, but I think we all know that …

Because the direction of the Earth’s axis moves, albeit very slowly, the position of north relative to the stars changes over time. The bright star that we see in our lifetimes that is closest to true north is Polaris, and so we call Polaris the pole star. It is the brightest star in the constellation Ursa Minor.

Procyon is the brightest star in the constellation Canis Minor (“lesser dog”). Even though Procyon looks like a single star, it is actually a binary star system.

44. Persian language unit? : MEW
The Persian is that long-haired cat with a squashed muzzle. The breed takes its name from its place of origin, namely Persia (Iran).

48. Psychoanalyst Melanie : KLEIN
Melanie Klein was a British psychoanalyst who was born in Austria. Klein’s main field of study was child psychology.

49. Hometown of the mathematician Fibonacci : PISA
Leonardo of Pisa was a famous and respected Italian mathematician, also known as simply “Fibonacci”. He is remembered for writing about a number sequence (although he didn’t “discover” it) that later was given the name “Fibonacci sequence”. He wrote about the series of numbers in his book called “Liber Abaci”, a celebrated work that introduced Arabic numerals (i.e. 0-9) to the Western world.

53. X or Y lead-in : GEN
The term “Generation X” originated in the UK where it was the name of a book by Jane Deverson. Her book detailed the results of a study of British youths in 1964, contrasting their lifestyle to those of previous generations. It was Canadian author Douglas Coupland who was responsible for popularizing the term, with his more successful publication “Generation X: Tales for an Accelerated Culture”. By the latest accepted definition, Gen-Xers were born between 1961 and 1981.

“Generation Y” is alternative term for the Millennial Generation. Millennials were born after the “Gen-Xers”, from the early 1980s to the early 2000s.

54. Uno’s alternative : OLIVE GARDEN
Olive Garden is a chain of Italian-American restaurants that has over 800 locations worldwide. The chain was originally established as part of General Mills. The current owners of the chain also operate Red Lobster restaurants. Apparently there are plans to co-located Olive Garden and Red Lobster eateries so that they have separate entries but share kitchens.

Down
2. Great Rift Valley port : AQABA
The coastal city of Aqaba is the only seaport in the country of Jordan. The city lies at the very northern tip of the Gulf of Aqaba, which is off the Red Sea.

The Great Rift Valley is an imprecise geographical term that describes a trench that runs from northern Syria to central Mozambique in Africa.

4. Some 27-Down : BICS
Société Bic is a French company, based in Clichy in France. The first product the company produced, more than fifty years ago, was the Bic Cristal ballpoint pen that is still produced today. Bic also makes other disposable products such as lighters and razors.

5. Prefix with culture : AVI-
The prefix “avi-” means “bird-related” as in “aviculture”, the breeding of birds.

8. Old Sony format : BETAMAX
The video standard known as VHS is more fully referred to as the Video Home System. VHS was one of many standards touted by various manufacturers in the seventies. The biggest rival to VHS was of course Betamax, but we all knew which of the two standards won the final round in that fight.

10. Cock-a-leekie eater : SCOT
Cock-a-leekie soup is a Scottish dish made from leeks and chicken stock that is thickened with barley. Die-hard cock-a-leekie aficionados include prunes in the list of ingredients.

14. Man’s name that sounds noble : ERLE
In the ranking of nobles, an earl comes above a viscount and below a marquess. The rank of earl is used in the British peerage system and is equivalent to the rank of count in other countries. Other British ranks have female forms (e.g. marquess and marchioness, viscount and viscountess), but there isn’t a female word for the rank of earl. A female given the same rank as an earl is known simply as a countess.

23. “___ With the Long Neck” (Parmigianino painting) : MADONNA
Parmigianino is the name that is usually used for the Italian painter Girolamo Francesco maria Mazzola. “Parmigianino” translates as “the little one from Parma”.

24. Pro athlete in purple and gold : LA LAKER
The Los Angeles Lakers basketball team started out in 1947 in Minneapolis, Minnesota. The team chose the Lakers name in honor of the nickname of Minnesota, “Land of 10,000 Lakes”. The Lakers moved to Los Angeles in 1960.

26. Dispenser of Duff Beer : MOE
Moe Szyslak is the surly bartender in “The Simpson” animated TV show. I don’t really care for “The Simpsons”, but Hank Azaria who supplies the voice for the character … him I like.

30. TV antiheroine for 41 years : ERICA KANE
Susan Lucci is perhaps the most famous actor associated with daytime soap operas, and was the highest paid actor in daytime television. Lucci was nominated for a Daytime Emmy Award as Outstanding Lead Actress in a Drama Series an incredible 21 times, for her portrayal of Erica Kane in “All My Children”.

45. Business fraudster Billie Sol ___ : ESTES
Billie Sol Estes was a businessman who went to jail for fraud several times in the sixties and seventies. The Estes cases hit the front pages because he was a business associate of future president Lyndon Johnson. In addition, Estes made claims that President Johnson was involved in the assassination of President Kennedy.

46. General who won 1794’s Battle of Fallen Timbers : WAYNE
The Battle of Fallen Timbers was fought in 1794 between an alliance of Native American tribes and the US Army led by General “Mad Anthony” Wayne. The outcome was a decisive victory for the US and brought to a close the Northwest Indian War. This gave the United States control of the Northwest territory, land lying between the Ohio and Mississippi Rivers and the Great Lakes.

49. One may be fingered : PERP
“Perp” is short for perpetrator.

51. “Revolution” or “Hound Dog” starter : YOU
The Beatles song “Revolution” was written by John Lennon and was released in 1968 as a B-side to “Hey Jude”.

You ain’t nothin’ but a hound dog
cryin’ all the time.

52. Port named after a U.S. president, informally : JAX
The port city of Jacksonville, Florida is the largest city by area in the contiguous United States (four cities in Alaska cover more land). Jacksonville was named in honor of President Andrew Jackson.