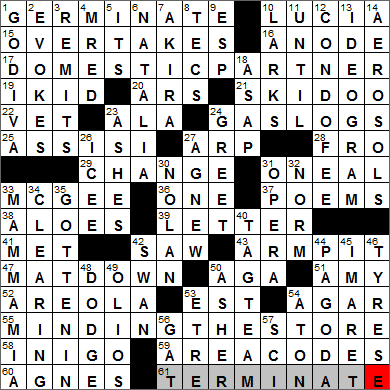 CROSSWORD SETTER: Peter A. Collins
THEME: Begin to End … today we have what’s being called a “mini-theme”. The across clues “begin” with GERMINATE and “end” with TERMINATE, and the center of the grid refers to this pair of answers:

Today’s Wiki-est, Amazonian Googlies
Across
10. Donizetti heroine : LUCIA
“Lucia di Lammermoor” is an 1835 opera by Gaetano Donizetti, which is loosely based on the historical novel “The Bride of Lammermoor” written by Sir Walter Scott.

16. Magnetron component : ANODE
A magnetron is a vacuum tube that is used to generate microwaves. Magnetrons are used in radar devices and microwave ovens.

20. Things often dropped in Harvard Yard? : ARS
The Boston accent is noted for is broad A, and dropping of the letter R.

Harvard Yard is a large grassy area at the very center of Harvard University.

21. Big name in winter vehicles : SKI-DOO
Ski-Doo is a brand name of snowmobile produced by the Canadian company, Bombardier Recreational Products. The first Ski-Doo went on sale in 1959 and was intended to be named a “Ski-Dog” as the marketing concept was that the personal snowmobile would replace the dogsleds used by hunters and trappers. A painter misread instructions and wrote “Ski-Doo” on the side of the vehicle instead of Ski-Dog, and the name stuck.

27. “Before My Birth” collagist, 1914 : ARP
Hans Arp was a French artist renowned for his work with torn and pasted paper, although that wasn’t the only medium he used. Arp was the son of a French mother and German father and spoke both languages fluently. When he was speaking German he gave his name as Hans Arp, but when speaking French he called himself Jean Arp. Both “Hans” and “Jean” translate into English as “John”. In WWI Arp moved to Switzerland to avoid being called up to fight, taking advantage of Swiss neutrality. Eventually he was told to report to the German Consulate and fill out paperwork for the draft. In order to get out of fighting, Arp messed up the paperwork by writing the date in every blank space on the forms. Then he took off all of his clothes and walked with his papers over to the officials in charge. He was sent home …

31. 10-year-old Best Supporting Actress : O’NEAL
Tatum O’Neal is the youngest actress to win a “competitive” Oscar. She won the Best Supporting Actress Award in 1974 when she was just 10 years old, for her role as Addie in “Paper Moon”. The youngest person to win an honorary Academy Award was Shirley Temple, who was only 5 years old when she was presented with an Oscar in 1934.

50. Ottoman bigwig : AGA
“Aga” (also “agha”) is a title that was used by both civil and military officials in the Ottoman Empire.

The Ottoman Dynasty was named for its founder, Osman I. The term “Ottoman” comes from the name “Osman”. The “Ottoman Empire” was really established with the conquest of Constantinople, and that didn’t happen until almost 130 years after Osman I died.

51. Tan in a library : AMY
Amy Tan lives not too far from here, in Sausalito just north of San Francisco. Tan is an American writer of Chinese descent whose most successful work is “The Joy Luck Club”. “The Joy Luck Club” was made into a movie produced by Oliver Stone in 1993. The novel and movie tell of four Chinese-American immigrant families in San Francisco who start the Joy Luck Club, a group playing Mahjong for money and eating delicious food.

Nancy is a city in northeastern France.

54. Vegan gelatin substitute : AGAR
Agar is a jelly extracted from seaweed that has many uses. Agar is found in Japanese desserts, and can also be used as a food thickener or even as a laxative. In the world of science it is the most common medium used for growing bacteria in Petri dishes.

59. Prefixes featured on some maps : AREA CODES
Area codes were introduced in the 1940s. Back then the “clicks” one heard when dialling a number led to mechanical wear on various pieces of equipment. In order to minimize overall mechanical wear, areas with high call volumes were given the most efficient area codes (lowest number of clicks). That led to New York getting the area code 212, Los Angeles 213 and Chicago 313.

Down
1. One known for riding out of gear? : GODIVA
In the legend of Lady Godiva, a noblewoman rode naked through the streets of Coventry in England, basically as a dare from her husband in return for relieving the taxes of his tenants. Lady Godiva issued instructions that all the town’s inhabitants should stay indoors while she made her journey. However, a tailor in the town named Tom disobeyed the instructions by boring holes in the shutters on his windows, and “peeped”. As a result, Peeping Tom was struck blind, and the term “peeping Tom” has been in our language ever since.

4. He’ll “talk ’til his voice is hoarse” : MR ED
“Mister Ed” first aired in 1961 and ran for almost five years. It was a very successful show (and even made it to Ireland!). Mister Ed, the talking horse, was a palomino that had the real name of Bamboo Harvester. Mister Ed’s “voice” was that of actor Allan “Rocky” Lane, a star of a lot of B-movie westerns from the forties and fifties. In the show, Mister Ed would only talk to the lead (human) character Wilbur, played by Alan Young, leading to some hilarious situations. Mister Ed had a stunt double and stand-in for the show, another horse called Pumpkin. Pumpkin later played the horse that made frequent appearances on the show “Green Acres”.

5. The Who’s “___ Hard” : IT’S
The English rock band called the Who was formed in 1964, bringing together famed musicians Roger Daltrey, Pete Townshend, John Entwistle and Keith Moon. According to “Rolling Stone” magazine, the Who were the third arm of the holy trinity of British rock, alongside the Beatles and the Rolling Stones.

8. Many pulp heroes, in slang : TECS
“Tec” is slang for a private detective.

12. Unit charge : CONDO FEE
The words “condominium” and “apartment” tend to describe the one type of residential property, a private living space with facilities shared with others residing in the same building or complex. The difference is that a condominium is usually owned, and an apartment is rented. At least that’s how it is in the US. The word “condominium” comes from the Latin “com” (together) and “dominum” (right of ownership).

13. “&” or “@,” but not “and” or “at” : IDEOGRAM
An ideograph or ideogram is pictorial symbol used to represent a concept. A good example would be an emoticon, like a smiley face :o)

26. Drink brand symbolized by a polar bear : ICEE
Icee is the brand name of one of those slushy drinks. Yuk …

27. 39th vice president : AGNEW
Spiro Agnew served as Vice-President under Richard Nixon, before becoming the only VP in American history to resign because of criminal charges (there was a bribery scandal). Agnew was also the first Greek-American to serve as US Vice-President as he was the son of a Greek immigrant who had shortened the family name from Anagnostopoulos.

“The Dark Knight Rises” is a 2012 movie in the “Batman” franchise that stars Christian Bale as the superhero. The bad guys that Batman battles are Selina Kyle played by Anne Hathaway and Bane played by Tom Hardy.

31. Grammy category : OPERA
The first Grammy Awards Ceremony was held in 1959 and focused on recognizing outstanding achievement in the recording industry. The idea of a Grammy Award came up when recording executives were working on the Hollywood Walk of Fame project in the fifties. These executives concluded that there were many people in the recording industry deserving of accolades but who would probably never make it to the Walk of Fame. As a result, they founded the National Academy of Recording Arts and Sciences. The Academy considered naming the award the “Eddies” after Thomas Edison, but then opted for “Grammy” after Edison’s invention: the gramophone.

33. “Lordy!” in Lodi : MAMMA MIA!
Lodi is a city in Lombardy in the north of Italy. The inhabitants of Lodi are known as Lodigiani.

42. Pavlova portrayed one over 4,000 times : SWAN
Anna Pavlova was a Russian ballerina who performed in the late 1800s and early 1900s. Pavlova became so successful that she was the first ballerina to pull together her own company and tour the world. Her most famous role was “The Dying Swan” that she danced to the beautiful “Le cygne” from Saint-Saëns’ “Carnival of the Animals”. Pavlova eventually left Russia for good and settled in England.

45. Eastern lodging : IMARET
Imarets were inns or hostels used by pilgrims throughout the Ottoman Empire. The network of imarets was set up to provide food to anyone in need, so also served as “soup kitchens”.

46. “2 Fast 2 Furious” co-star Gibson : TYRESE
Tyrese Gibson is singer-songwriter and actor who is known simply as “Tyrese”. Tyrese is best known for playing the character Roman Pearce in the “Fast And Furious” series of movies.

49. Jumbles : OLIOS
“Olio” is a term meaning a hodgepodge or a mixture, coming from the mixed stew of the same name. The stew in turn takes its name from the Spanish “olla”, the clay pot used for cooking.

50. One of Jacob’s sons : ASHER
In the Book of Genesis, Asher was the second son of Jacob, and the founder of the tribe of Asher. Asher collaborated in the plot to sell his brother Joseph into slavery.

56. Piece of the street : GAT
“Gat” is a slang term for a gun that is derived from the Gatling gun, the precursor to the modern machine gun. The Gatling gun was invented by Dr. Richard J. Gatling in 1861. Apparently he was inspired to invent it so that one man could do as much damage as a hundred, thereby reducing the size of armies and diminishing the suffering caused by war. Go figure …