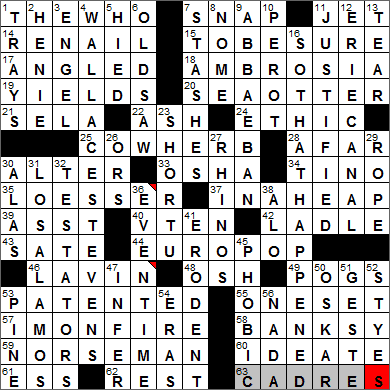 Today’s Wiki-est, Amazonian Googlies
Across
1. First rock band whose members received Kennedy Center Honors : THE WHO
The English rock band called the Who was formed in 1964, bringing together famed musicians Roger Daltrey, Pete Townshend, John Entwistle and Keith Moon. According to “Rolling Stone” magazine, the Who were the third arm of the holy trinity of British rock, alongside the Beatles and the Rolling Stones.

11. Shade of black : JET
The color “jet black” takes its name from the minor gemstone known as jet. The gemstone and the material it is made of takes its English name from the French name: “jaiet”.

17. Dropped a line? : ANGLED
One drops a line in the water when angling, trying to catch a fish.

18. Olympians’ food : AMBROSIA
In Greek mythology, according to Homer anyway, the drink of the gods was nectar, and their food was ambrosia.

19. Figures for investors : YIELDS
In the world of finance and investing, the yield curve for a particular investment is the relation between the interest rate that can be locked in, and the length of time the loan will be in place. Typically, the longer you are willing to lend your money (say by buying a government security), then the higher interest rate the borrower is willing to pay. So, the yield tends to move upwards over time.

20. Animal that catches fish with its forepaws : SEA OTTER
The fur of the sea otter is exceptionally thick. It is in fact the densest fur in the whole animal kingdom.

21. Ward on a set : SELA
The actress Sela Ward turns up in crosswords a lot. Ward played Teddy Reed in the TV show “Sisters” in the nineties, and was in “Once and Again” from 1999-2002. I don’t know either show, but I do know Ward from the medical drama “House” in which she played the hospital’s lawyer and Greg House’s ex-partner. That was a fun role, I thought. More recently Ward has been playing a lead role on “CSI: NY” and is a very welcome and much-needed addition to the cast …

33. Part of the Dept. of Labor : OSHA
The Occupational Safety and Health Administration (OSHA) was created in 1970 during the Nixon administration. OSHA regulates workplaces in the private sector and regulates just one government agency, namely the US Postal Service.

34. All-Star Martinez : TINO
Tino Martinez has retired from Major League Baseball. Martinez played first base for a number of teams including the Mariners, Yankees, Cardinals and Devil Rays. Martinez was born and raised in Tampa, Florida and as a boy he worked in his father’s cigar factory.

35. “Guys and Dolls” composer/lyricist : LOESSER
Frank Loesser was a songwriter who was famous for penning both lyrics and music for the Broadway show “Guys and Dolls” and “How To Succeed In Business Without Really Trying”. Loesser also wrote the marvelous song “Baby, It’s Cold Outside”.

“Guys and Dolls” is a musical with music and lyrics by Frank Loesser. It was first produced on Broadway, in 1950, and ran for 1200 performances. The show was based on a book written by Jo Swerling and Abe Burrows. “Guys and Dolls” was chosen as winner of a Pulitzer in 1951, but the award was cancelled as Abe Burrows was having problems with the House Un-American Activities Committee at the time.

43. Fill : SATE
“Sate” is a variant of the earlier word “satiate”. Both can mean either to satisfy an appetite fully, or to eat to excess.

44. Abba’s genre : EUROPOP
I am an unapologetic fan of ABBA’s music. ABBA was of course the Swedish group who topped the charts in the seventies and eighties. The name ABBA is an acronym formed from the first letters of the given names of each of the band members, namely: Agnetha, Benny, Bjorn and Anni-Frid.

46. “Alice” actress Linda : LAVIN
Linda Lavin is a singer and actress who is probably best-known outside of New York for playing the title role in the seventies and eighties sitcom “Alice”.

The TV sitcom “Alice” ran from 1976 to 1985, a story about a widow named Alice who takes a job at Mel’s Diner. The show was based on a very successful 1974 movie called “Alice Doesn’t Live Here Anymore” directed by Martin Scorsese (his first Hollywood production) and starring Ellen Burstyn and Kris Kristofferson.

48. Kyrgyzstan’s second-largest city : OSH
Osh is the second largest city in the former Soviet Republic of Kyrgyzstan (after the capital Bishkek). Osh was a center of silk production and lies along the old Silk Road, the trade route that traversed Asia.

49. Game discs : POGS
The game of pogs was originally played with bottle caps from POG fruit juice. The juice was named for its constituents, passion fruit, orange and guava.

57. Springsteen hit with the lyric “Only you can cool my desire” : I’M ON FIRE
“I’m on Fire” is a song from Bruce Springsteen’s incredibly successful album “Born in the U.S.A.” The song was released as a single in 1982.

Bruce Springsteen is a rock singer and songwriter, famously from New Jersey. A lot of Springsteen’s works are centered on his home state and the American heartland. His most famous album is “Born in the USA”, which was released in 1984. Springsteen lives in New Jersey, with his wife Patti Scialfa and their children.

58. Noted graffiti artist : BANKSY
Banksy is an English graffiti artist who is noted for his contempt of the British government for condemning his work as vandalism. Banksy’s work can fetch a pretty penny at auction. No one seems to know for sure who Banksy actually is …

63. Trained groups : CADRES
A “cadre” is most commonly a group of experienced personnel at the core of a larger organization that the small group trains or heavily influences. “Cadre” is a French word meaning a “frame”. We use it in the sense that a cadre is a group that provides a “framework” for the larger organization.

Down
2. Three-time Olympic skating gold medalist : HENIE
Sonja Henie was a World and Olympic Champion figure skater from Norway from the days when “amateur” sports stars were not paid. Henie made up for her lack of income from competing by developing a career in Hollywood. She was one of highest paid stars at the height of her movie career.

8. Norton Sound city : NOME
Nome, Alaska has over 3,500 residents, the majority of whom are Native American. The next largest ethnic group in Nome is the white population.

The town of Nome lies on the northern edge of the Norton Sound, an inlet of the Bering Sea in Alaska. Norton Sound was named by Captain James Cook in 1778, in honor of Sir Fletcher Norton who was Speaker of the British House of Commons at that time.

9. Diplomat who wrote “The Tide of Nationalism” : ABBA EBAN
Abba Eban was an Israeli diplomat and politician, born Aubrey Solomon Meir Eban in Cape Town, South Africa. While working at the United Nations after WWII, Eban changed his given name to “Abba”, the Hebrew word for “father”. He made this change as reportedly as he could see himself as the father of the nation of Israel.

10. Reform Party founder : PEROT
Henry Ross Perot graduated from the US Naval Academy in 1953, as president of his class. Ross Perot served his 4-year commitment but then resigned his commission, apparently having become somewhat disillusioned with the navy. He was ranked number 101 on the Forbes 400 List of Richest Americans in 2012, and at that time was worth about $3.5 billion.

12. Construction project that began in Rome : ERIE CANAL
The Erie Canal runs from Albany to Buffalo in the state of New York. What the canal does is allow shipping to proceed from New York Harbor right up the Hudson River, through the canal and into the Great Lakes. When it was opened in 1825, the Erie Canal had immediate impact on the economy of New York City and locations along its route. It was the first means of “cheap” transportation from a port on the Atlantic seaboard into the interior of the United States. Arguably it was the most important factor contributing to the growth of New York City over competing ports such as Baltimore and Philadelphia. It was largely because of the Erie Canal that New York became such an economic powerhouse, earning it the nickname of the Empire State.

It is assumed that Rome, New York is named after the city in Italy, but no one seems to be sure why it is so called. The city, in Upstate New York near Utica, was originally founded as Lynchville. Prior to becoming a city, the settlement was called Fort Stanwix, named for the military outpost that dominated the area.

26. Boolean operators : ORS
Boolean logic is a logic system used in computers. The system takes its name from the man who devised it in 1854, George Boole. Boolean logic is used by many Internet search engines. Using Boolean logic in a search you can combine words into one search term “like this” by using quotation marks. You can also search for pages that contain “term one” but NOT “term two” by searching for “term one” – “term two”.

27. Charging things? : RHINOS
There are five types of rhinoceros that survive today, and the smaller Javan Rhino is the most rare. The rhinoceros is probably the rarest large mammal on the planet, thanks to poaching. Hunters mainly prize the horn of the rhino as it is used in powdered form in traditional Chinese medicine.

31. Literally, “the cottonwoods” : LOS ALAMOS
The town of Los Alamos, New Mexico takes its name from the Spanish for “the poplars” or “the cottonwoods”. Famously, it is home to Los Alamos National Laboratory which was founded during WWII to work on the Manhattan Project, the development of the first atomic bomb. The town of Los Alamos didn’t exist as such, until it was planned and constructed to support the employees working on development of the bomb.

32. Those with will power? : TESTATORS
A “testator” is someone who has made a legally valid will. The Latin “testari” means “to make a will”.

38. Spanish greeting : ALO
“Alo” is an alternative one can use to “hola” when one wants to say “hello” in Spanish.

John Le Carré is the pen name of David Cornwell, an English author famous for his spy novels. Cornwell worked for British Intelligence during the fifties and sixties, even as he was writing his spy thrillers. He left MI6 in 1963 soon after his most famous novel, “The Spy Who Came in from the Cold”, became such a great success.

51. Heroic tale : GESTE
Our word “gest” meaning a great deed or an exploit has been around since about 1300, and comes from the Old French word “geste” meaning the same thing. These days “geste” can also mean “gesture”.

56. Squat : NADA
“Nada” is the Spanish word for “nothing”. “De nada” translates literally from the Spanish as “of nothing”, and is used to mean “you’re welcome” or “don’t mention it”. The French have the same expression “de rien”, also translating to “of nothing” and used the same way.