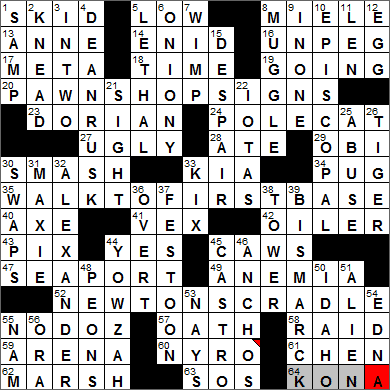 20A. Many traditionally have three balls : PAWNSHOP SIGNS
35A. What four balls may let you do : WALK TO FIRST BASE
52A. Gizmo often with five balls that demonstrates conservation of momentum and energy : NEWTON’S CRADLE

Today’s Wiki-est, Amazonian Googlies
Across
8. Vacuum cleaner brand : MIELE
Miele is a manufacturer of kitchen equipment based in Germany. The company was founded by Carl Miele and Reinhard Zinkann in 1899, and is still privately-held and family-run. One of Miele’s first products was a butter churn.

13. Queen in “The Three Musketeers” : ANNE
“The Three Musketeers” were Athos, Porthos and Aramis, and their young protégé was D’Artagnan. A musketeer was an infantry soldier who was equipped with a musket. Paradoxically, Alexandre Dumas’ three musketeers really didn’t use their muskets, and were better known for their prowess with their swords.

Anne of Austria was married to Louis XIII of France and served as regent for her son Louis XIV, when he inherited the throne at the of four years. Anne was a central character in the Alexandre Dumas novel “The Three Musketeers”. In the novel, Anne engages in a secret affair with the English Duke of Buckingham.

14. U.S. city named for a Tennyson character : ENID
Enid, Oklahoma takes its name from the old railroad station around which the city developed. Back in 1889, that train stop was called Skeleton Station. An official who didn’t like the name changed it to Enid Station, using a character from Alfred Lord Tennyson’s “Idylls of the King”. Maybe if he hadn’t changed the name, the city of Enid would now be called Skeleton, Oklahoma! Enid has the nickname “Queen Wheat City” because is has a huge capacity for storing grain, the third largest grain storage capacity in the world.

17. Self-referential, in modernspeak : META
In recent decades the prefix “meta-” has started to be used as a standalone adjective. In this sense “meta” means “self-referential”, describing something that refers to itself. For example, “This sentence starts with the word ‘this’ and ends with the word ‘this’” might be called a meta sentence. A movie that is about the making of the very same movie could also be described as meta.

20. Many traditionally have three balls : PAWNSHOP SIGNS
The tradition sign outside a pawnbroker’s shop consists of three balls. This symbol dates back to the Middle Ages, where it was used on coats of arms as a sign of monetary success. The running joke is that the three balls mean “two to one, you won’t get your stuff back”.

23. Gray in a novel painting : DORIAN
“The Picture of Dorian Gray” is a novel by Oscar Wilde, in fact Wilde’s only novel. In the story, the title character is a young man appearing in a painting. Jokingly, Dorian sells his soul to the devil so that the painting would age rather than he.

24. Skunk : POLECAT
“Polecat” is a term used for several different animals, most of which are in the weasel family.

27. In pre-swan mode : UGLY
There once was an ugly duckling …

29. Sapporo sash : OBI
The sash worn as part of traditional Japanese dress is known as an obi. The obi can be tied in what is called a butterfly knot.

Sapporo is the fourth largest city in Japan, and lies on the island of Hokkaido. The city and surrounding area was home to the first Olympic Games to be held in Asia, the Winter Games of 1972. For the beer drinkers out there, Sapporo is also home to Sapporo Brewery, with the Sapporo beer being one of the more internationally recognizable.

33. Optima maker : KIA
The Kia Optima was sold for a while in Canada and Europe as the Kia Magentis.

34. Boxer : PUG
“Pug” is a slang term for a boxer, or perhaps a fight in general. The term is an abbreviation of “pugilist” meaning “boxer”.

42. Crude conveyance : OILER
An “oiler” is an oil tanker.

49. Weakness : ANEMIA
The term “anemia” (or “anaemia” as we write it back in Ireland) comes from a Greek word meaning “lack of blood”. Anemia is a lack of iron in the blood, or a low red blood cell count. Tiredness is a symptom of the condition.

“Some Like it Hot” is such a fun movie, released in 1959 and directed by Billy Wilder. The big three in the cast are of course Marilyn Monroe, Tony Curtis and Jack Lemmon. A few years ago a stage version of “Some Like It Hot” was playing in San Francisco, with Tony Curtis in the cast. This time he played the older man who was wooing the Jack Lemmon character in the movie.

60. “Wedding Bell Blues” composer Laura : NYRO
Laura Nyro was a singer-songwriter from the Bronx, New York. Nyro had success with her own recordings, but her songs were even more successful when recorded by other big names. Two of Nyro’s compositions were “Eli’s Coming” recorded by Three Dog Night, and “Stoney End” by Barbra Streisand.

61. Julie ___, host of TV’s “Big Brother” : CHEN
As well as co-anchoring “The Early Show”, Julie Chen has been host of the American version of “Big Brother” since it graced our screens in the year 2000.

62. Habitat for bitterns : MARSH
Bitterns are wading birds in the heron family. Unlike most of their heron cousins, bitterns tend to have short necks.

63. Rihanna’s first #1 Billboard single : SOS
The singer Rihanna was born and grew up on the island of Barbados and moved to the US when she was 16-years-old to pursue a singing career.

64. Mauna Loa coffee : KONA
Kona coffee is cultivated on the Big Island of Hawaii, on the slopes of Mauna Loa and Hualalai, two of the five active volcanoes on the island. Coffee plants were brought to Kona in 1828 and late in the 19th century, coffee became a viable and worthwhile crop. Today Kona is a one of the most expensive and popular coffees in the world.

6. Lyonnaise : ONIONY
The adjective “Lyonnaise”, as well as describing someone from the French city of Lyon, is used in French cuisine to mean “cooked with onions”.

10. Pepsi-Cola mix? : EPISCOPAL
“Episcopal” is an anagram of “Pepsi Cola”.

11. Tony winner Cariou : LEN
Len Cariou is a Canadian actor, famous for his Broadway portrayal of “Sweeney Todd”. I most recognize him from supporting roles in “Flags of Our Fathers” and “Thirteen Days”, two great movies.

22. Greek vowels : IOTAS
Iota is the ninth letter in the Greek alphabet. We use the word “iota” to portray something very small as it is the smallest of all Greek letters.

26. Nast’s symbol for Tammany Hall : TIGER
The building known as Tammany Hall was home to the Tammany Society, an organization in New York City that came to be the political machine behind the Democratic Party that held sway in New York State from the late-18th century to the mid-20th century. The society was named for Tamanend, a leader of the Native American Lenape people.

Thomas Nast was an American caricaturist and cartoonist. He was the creator of the Republican Party elephant, the Democratic Party’s donkey, Uncle Sam and the image of the plump and jocular Santa Claus that we use today.

30. Quid-pro-quo arrangements : SWAPS
“Quid pro quo” is Latin for “something for something”, a swap.

32. Gin concoction : ALEXANDER
An Alexander is a cocktail made from gin, a chocolate liqueur and cream. Nowadays one tends to hear of the Brandy Alexander more often than the original gin version.

33. General Mills offering : KIX
Kix cereal has been around since 1937, would you believe? Kix used to be just puffed grains, processed to give the characteristic shape. Then the decision was made to add sugar to get better penetration into the young kid marketplace. Sad really …

39. State capital whose site was visited by Lewis and Clark : BISMARCK
Bismarck is the second most populous city in North Dakota (after Fargo), and the state capitol. The site that became the city was originally known as Missouri Crossing, as it was the location where the Lewis and Clark Expedition crossed the river. Missouri Crossing became Edwinton after an employee of the Northern Pacific Railway. The railway company renamed the city Bismarck in honor of Otto von Bismarck, the German chancellor as Northern Pacific was hoping for German investment.

46. Sweet chili peppers : ANCHOS
An ancho is a dried poblano pepper. The poblano is a mild chili.

48. Day laborers : PEONS
A peon is a lowly worker with no real control over his/her working conditions. The word comes into English from Spanish where it has the same meaning.

51. Xenophobe’s aversion : ALIEN
Xenophobia is the uncontrollable fear of foreigners. The word comes from Greek, with “xeno” meaning guest, stranger or foreigner, and “phobia” meaning fear, horror or aversion.

54. “Hairspray” mom : EDNA
In the musical “Hairspray”, Edna Turnblad is one of the main characters. “Hairspray” was originally a John Waters movie, from 1988. In that film Edna was played by Divine, a famous drag queen who featured in many Waters films. In the stage musical that opened in 2002, the original Broadway cast featured Harvey Fierstein as Edna. The 2007 movie adaptation of the musical has John Travolta in the role.