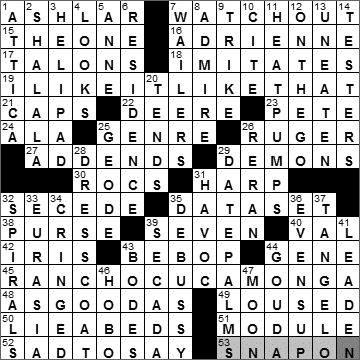 Across
1. Masonry that requires little mortar : ASHLAR
There’s “rubble masonry” and “ashlar masonry”. The former uses irregularly-shaped stones, to build a wall perhaps, whereas the later uses stone that has been dressed, generally sculpted into rectangular blocks. So ashlar often can look like brick, but the “brick” is just shaped stone as opposed to formed and fired building material.

16. ___ Shelly, writer/director/co-star of “Waitress,” 2007 : ADRIENNE
Adrienne Shelly was an American actress, and also a screenwriter and director. She has worked a lot in independent films, including the very successful 2007 “Waitress

” in which she starred and was a co-writer. Tragically, Shelly died in 2006, at only 40 years of age. Her husband found her hanging with a bed-sheet wrapped around her neck in the bathroom. The apparent suicide was found to be murder, and a 19-year-old from the apartment below confessed to the crime. Shelly had caught him stealing cash from her purse, and he killed her when she grabbed the phone to call the police. It can be a sad, very sad world in which we live …

came right on the heels of the Beatles in the British Invasion of the sixties. They had a great hit single in 1964 that knocked the Beatles’ “I Want to Hold Your Hand” off the top of the charts. My favorite tune of theirs, “Bits and Pieces”, followed later that year, and “I Like it Like That

” was a hit in 1965. The band’s popularity waned in the late sixties, as they didn’t follow the Beatles and others into the “psychedelic sound”, and they broke up in 1970.

23. British actor Postlethwaite : PETE
Pete Postlethwaite is an English actor, who started out in the business at the famous Liverpool Everyman Theatre, a contemporary of the likes of Bill Nighy (“Love Actually”, “Valkyrie”) and Julie Walters (“Educating Rita”, “Calendar Girls”). You might have seen Postlethwaite in 1993’s “In the Name of the Father” for which he earned an Oscar nomination. He is one of the few English actors that can put on a great Irish accent, as he showed in that movie.

was a country singer, regarded by many as the perhaps the greatest country singer of all time. He topped the charts eleven times between 1948 and 1953. His career was cut short though, as he died at only 29 years of age. Williams suffered from spina bifida, and was prescribed strong painkillers for his back pain, including morphine. He abused the drugs and alcohol, and in 1952, even though he was at the height of his success, he was fired from the “Grand Ole Opry” and told not to return until he was sober. He died on New Year’s Day 1953, after injecting himself with morphine.

26. Maker of rifles and revolvers : RUGER
Ruger is an American firearm manufacturer, based in Fairfield, Connecticut. Apparently Ruger are not a favorite with the NRA as the company founder, William Ruger, wrote a letter to Congress in 1989 defending the lawful use of firearms, but proposing a complete ban on large capacity magazines. The magazine would be the banned item, and not the firearm itself. Such a move would in effect “ban” assault rifles and semi-automatic rifles.

27. Total producers : ADDENDS
An “addend”, short for “addendum”, is apparently a word in its own right, and is a set of numbers that are to be added.

30. Birds said to feed their young with elephants : ROCS
The mythical roc is a huge bird of prey, reputedly able to carry off and eat elephants.

31. Instrument capable of glissandi : HARP
In music, a glissando (the plural of which is “glissandi”), is a “glide” from one pitch to another, a rapid “slide” through a series of consecutive notes. On a piano this can be accomplished by swiping a finger across the keys, and on a harp

the effect is achieved with a similar action.

39. Common number of spots on a ladybug : SEVEN
The seven spots commonly found on the wing covers gave rise to the common name “ladybug”, as in the Middle Ages the insect was called the “beetle of Our Lady”. The spots were said to symbolize the Seven Joys and Seven Sorrows, events in the life of the Blessed Virgin Mary called out in the Roman Catholic tradition.

40. Crime novelist McDermid : VAL
Val McDermid is a crime writer from Scotland. Her most famous protagonist is Dr. Tony Hill. Her books have are noted for graphic descriptions of violence and torture, so probably aren’t my cup of tea …

was a Jazz saxophonist, who was often just called “Bird” or “Yardbird”. He was a leader in the development of the style of jazz called “bebop”, which gained popularity in the forties. Charlie Parker had a rough life outside of music. He was a heroin addict, and a heavy drinker. When he died, the coroner who performed his autopsy estimated his age as between 50 and 60 years old based on the appearance of his body and condition of his organs. He was actually 34-years-old when he died in a New York City hotel room in 1955.

had a running gag going on his radio show, “The Jack Benny Program”, in which he made fun of the city name “Rancho Cucamonga”. He had Mel Blanc (also famous as the voice of Bugs Bunny and other cartoon characters) make a fake train station announcement, faltering over the name “Cuc …. amonga”. The city loved the publicity, and named a street there Jack Benny Way. Outside the city’s minor league baseball stadium, on Jack Benny Way, they also erected a bronze statue of Jack Benny. The statue has since been moved, so if you are in town, it’s in now in the Victoria Gardens Cultural Center,

Down
1. Ancient land on the Aegean : ATTICA
Greece is divided into 13 peripheries, regional administrative divisions. The capital of Greece, Athens, is located in the periphery of Attica.

2. 1974 top 10 Al Green hit subtitled “Make Me Happy” : SHA-LA-LA
Al Green is a gospel and soul music singer. He was born in Arkansas, where he started out as a gospel singer, and moved into R&B. In 1974, he was assaulted by a girlfriend who burned him badly on much of his body with pouring boiling grits over him, and then committed suicide. The incident changed Green’s life, and and he turned to the church, becoming a pastor in Memphis in 1976. He continued to record music, but never really enjoyed the same success that he had in the early seventies, with hits like “Let’s Stay Together” and “I’m Still In Love With You”.

5. James I’s queen consort : ANNE
James I of England was also James VI of Scotland, until he died in 1625. He became king of Scotland when he was just 13 months old after his mother, Mary, Queen of Scots was forced to abdicate. He inherited the title of James I of England when Elizabeth I died in 1603 without issue. That marked the end of the Tudor monarchy, and the beginning of the House of Stuart reign (Mary was James’s mother, Henry Stuart, Lord Darnley, was his father). A suitable marriage was arranged for James, to 14-year-old Anne of Denmark

. The couple had three children, two boys and a girl. the eldest boy died as a teenager, so the youngest son inherited the throne from his father, as Charles I.

7. 1960s-’70s group originally known as the Teenagers, with “the” : WAILERS
The Wailers were the band formed in Kingston, Jamaica in 1963, whose most famous member was Bob Marley. The bands name went through a few iterations, starting out as the Teenagers, then the Wailing Rudeboys, the Wailing Wailers, and finally simply the Wailers.

9. Short ride? : TRIKE
I bet we all had a tricycle at some point, known as a trike

11. Alternatives to furnaces : HEAT PUMPS
Unlike a furnace that generates heat, a heat pump works by taking heat from one place to another. As such, heat pumps can be used to take heat away (cooling) or bring heat in (heating). Usually heat pumps draw heat from the air or the ground.

25. Sparkly rock : GEODE
A geode is naturally occurring rock in which there is a cavity lined with, or filled with crystal formations.

33. The majority of people live here : EURASIA
Eurasia covers 36% of the land mass on the planet, and is home to 71% of its population.

” (The Prodigal Son) quite early in his life, and it premiered in 1884. The work is described as a cantata in one act (a one-act opera in effect), and it earned him the Prix de Rome and a scholarship to the Academis des Baux-Arts allowing him to continue his studies. The prize included a four-year residence at the French Academy in Rome. But, Debussy was far from inspired by his stay in Rome, had no liking for Italian opera, and lacked the inspiration to compose. He was steadfast in his desire to “go his own way”, and thank goodness he won out in the end!

37. Juicy fruit : TANGELO
A fruit called a tangelo is a hybrid between a tangerine and either a grapefruit or a pomelo (which gives its the name). A pomelo is a very large, pear-shaped citrus fruit native to Southeast Asia.

39. Two-time Grammy winner Jon : SECADA
Jon Secada is a Cuban-American singer/songwriter, born in Havana and raised in Florida. Secada was hired as a background singer by Gloria Estefan in the late eighties, and soon after he started composing for her. It was Gloria Estefan that gave him his performing break, offering him solo spots on stage during her performances.

44. It may be smoked in a supermarket : GOUDA
Gouda is a cheese that originated in the Dutch city of the same name, but Gouda is produced all over the world and very little of it these days comes from the Netherlands. Gouda is often smoke-cured, given it a yellowish-brown outer skin, and that characteristic smoky taste.

46. Depression-era traveler : HOBO
No one seems to know how the term “hobo” originated, but it started to appear around 1890. Hobos differed from “tramps” and “bums”, in that “bums” refused to work, “tramps” worked when they had to, while “hobos” traveled in search of work.