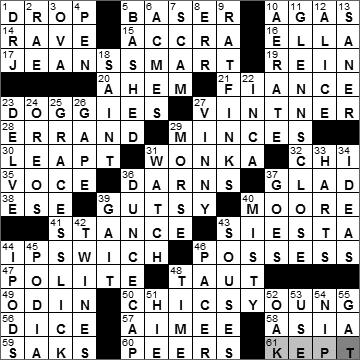 Across
10. “What ___!” (“That was fun!”) : A GAS
I reckon use of “a gas” to mean something fun must come from Ireland (I couldn’t confirm it though). We use the word “gas” as an adjective meaning “hilarious”. So, we’d say “that’s gas” when describing something very funny.

15. Capital of Ghana : ACCRA
Accra sits on the Ghana’s coast, and is a major seaport as well as the country’s capital city. The name “Accra” comes from a local word “Nkran” meaning “ants”, a name chosen because of the large number of anthills found in the area when the city was founded.

16. Fitzgerald who sang “A-Tisket A-Tasket” : ELLA
Ella Fitzgerald, the “First Lady of Song”, had a hard and tough upbringing. She was raised by her mother alone in Yonkers, New York. Her mother died while Ella was still a schoolgirl, and subsequently she became less interested in school. She fell in with a bad crowd, even working as a lookout for a bordello and as a Mafia numbers runner. She ended up in reform school, from which she escaped, finding herself homeless and living on the streets for a while. Somehow she managed to get herself a spot singing in the Apollo Theater in Harlem. From there her career took off, and as the say, the rest is history.

“A-Tisket, A-Tasket” was a hit for Ella Fitzgerald, and is very unusual in that the lyrics of the song are taken from a nursery rhyme. Ella Fitzgerald and Al Feldman took the words of the rhyme and extended them creating in 1938 what is now a jazz standard.

Jean Smart is best known for her comedic roles, notably as Charlene Frazier on CBS’s “Designing Women”, but she also did a great job playing the dramatic role of First Lady Martha Logan on Fox’s “24”. We can now see her portraying the Governor of Hawaii in the remake by CBS of “Hawaii Five-0”. It’s proving to be a fun show …

27. Person producing Bordeaux or Beaujolais : VINTNER
The word “vintner” comes from the Latin word for wine, as one might imagine, “vinum”.

32. The Windy City, for short : CHI
It seems that the derivation of Chicago’s nickname as the “Windy City” isn’t as obvious as I would have thought. There are two viable theories. First the weather can be breezy, with wind blowing in off Lake Michigan. The effect of the wind is exaggerated by the grid-layout adopted by city planners after the Great Chicago Fire of 1871. The second theory is that the “windy” means being full of bluster. Sportswriters from the rival city of Cincinnati were fond of calling Chicago supporters “windy” in the 1860s and 1870s, meaning that they were full of hot air in their claims that the Chicago White Stockings were superior to the Cincinnati Red Stockings.

35. Viva ___ : VOCE
“Viva voce” translates literally from Latin as “with living voice”, and we use it today to mean “by word of mouth”.

38. Suffix with Siam : ESE
The exact origins of the Siamese cat aren’t very clear, but it is believed be from Southeast Asia. The Siamese takes its name from the sacred temple cats of Thailand (once called Siam).

40. Roger who played 007 : MOORE
Roger Moore is best known in the US for taking on the role of 007 in seven James Bond from 1973 to 1985. In my part of the world we remember him playing a very debonair hero called Simon Templar in a TV series called “The Saint” from 1962 to 1969. . Moore’s Templar character could very easily have morphed into a great James Bond, but I personally think that Roger Moore was just a tad too long in the tooth to pull off a credible James Bond.

43. It might produce a snore in Sonora : SIESTA
Sonora is the state in Mexico lying just south of the borders with Arizona and New Mexico. The Sonoran Desert actually straddles the US-Mexico border, covering 120,000 square miles in parts of the states of Sonora, Baja California, Baja California Sur, Arizona and California.

44. Capital of Suffolk, England : IPSWICH
Ipswich is the county town of Suffolk in the south of England. Ipswich is an ancient town, but has achieved notoriety in recent times as well. There was a rash of killings in 2006 by the “Ipswich murderer” who killed five prostitutes before being brought to justice. Ipswich is also home to the world’s heaviest man, weighing in at 980 pounds.

49. Chief Norse god : ODIN
In Norse mythology, Odin is the chief of the gods. His wife, Frigg, is the queen of Asgard, and the deity that gave us our English term Friday (via Anglo-Saxon).

“Blondie” was created as a comic strip by Chic Young. It was first published in 1930, and is still being created today (although the strip is now controlled by Chic’s son, Dean). The strip spawned a series of radio programs (1939-1950) and a series of Blondie films (1938-1950). Blondie is married to Dagwood Bumstead. Dagwood slaves away at a construction company run by Julius Dithers, whose wife is called Cora.

57. Anouk of le cinéma : AIMEE
Anouk Aimée is a French film actress. Her most famous film outside of France is probably the internationally successful French hit from 1966, “A Man and a Woman”, in which she played the female lead.

58. Mongols’ home : ASIA
The Mongols are an ethnic group that is found today in modern Mongolia, in China and in Russia.

1. Nickname of a 6’7″ former basketball great : DR. J
Julius Erving is a retired professional basketball player who was known as DR. J, a nickname he picked up in high school. Dr. J was a trailblazer in many ways, being the first player associated with slam dunking, as well as other moves above the rim.

2. “Norma ___” : RAE
“Norma Rae” is a 1979 movie starring Sally Field, a tale of union activities in a textile factory in Alabama. The film is based on the true story of Crystal Lee Sutton told in a 1975 book called “Crystal Lee, a Woman of Inheritance”.

4. Cross or Parker : PEN
The Cross family were in the jewelry business, when in 1846 they founded a company to make gold and silver casings for pencils. Over time the company moved into the manufacture of pen and pencils, and now sell lines of watches and leather goods.

George Parker was a salesman for the John Holland Gold Pen Company when he decided to go out on his own in 1889, founding the Parker company that for years was the top pen manufacturer in the world. Things aren’t going nearly that well anymore, with layoffs in abundance.

6. Topmost points : ACMES
The “acme” is the highest point coming from the Greek “akme”, which has the same meaning.

9. Squealers : RATFINKS
Ratfink is a slang term used in North America, for a really obnoxious person, especially someone who has “squealed, spilled the beans”.

Glenn Close a wonderful actress who has played many, varied roles, but is well known for her portrayals of less than wholesome characters. She play the crazy Alex Forrest in “Fatal Attraction”, and Cruella de Vil in “101 Dalmatians”. Now she has a regular role on a TV show, “Damages”. Glenn Close is an avid fan of the New York Mets, and regularly sings the national anthem before games.

12. Girl who went through a looking glass : ALICE
Lewis Carroll wrote “Alice’s Adventures in Wonderland” in 1865, and the sequel in 1871 called “Through the Looking-Glass, and What Alice Found There”. Because in the second adventure Alice went through a looking glass, the themes were deliberately chosen to be mirror images of the themes in “Wonderland”. Whereas “Wonderland” begins indoors, is set in summer, and uses playing card imagery, “Looking Glass” begins out of doors, is set in winter and uses images from the game of chess.

13. Less addled : SANER
To be addled is to be confused.

18. Superdome player : SAINT
The New Orleans Superdome was opened in 1975, and is the largest, fixed-dome structure in the world, covering 13 acres. The seating capacity varies depending on the event being staged, but the Rolling Stones attracted a crowd of more than 87,500 people in 1981. The primary purpose of the structure is to host home games for the New Orleans Saints football team. Famously, in 2005, the Superdome became a shelter of last resort for about 30,000 in the aftermath of Hurricane Katrina.

22. Machu Picchu resident : INCA
Machu Picchu is of course known as “The Lost City of the Incas”, and it can be visited on a mountain ridge in Peru, 50 miles northwest of Cuzco. The name Machu Picchu means “old peak”.

24. Cookies in a box lunch : OREOS
The Oreo cookie was the biggest seller in the 20th century, and almost 500 billion of them have produced since they were introduced in 1912 by Nabisco. In those early days, the creme filling was made with pork fat, but today vegetable oils are used instead. If you take a bite out of an Oreo sold outside of America though, you might notice a difference from the homegrown cookie, as coconut oil is added to give a different taste.

Grace Slick is a now semi-retired singer who had a long solo career after finding success with Jefferson Airplane, Jefferson Starship and Starship. She is also a talented artist, a focus for her as her on-stage performing slows down. She has drawings that she made of Janis Joplin, Jerry Garcia and other music greats, and has been displaying her work in galleries for the past decade.

27. “My cousin” in a 1992 film : VINNY
“My Cousin Vinny” is a really fun film from 1992 starring Joe Pesci and Marisa Tomei. Would you believe that in 2008, the American Bar Association rated “My Cousin Vinny” as the #3 Greatest Legal Movie of all time, after “To Kill a Mockingbird” and “12 Angry Man”.

29. Man with a code : MORSE
Samuel Morse was a very accomplished painter with quite a reputation (he painted a portrait of President John Adams, for example). In 1825 he was in Washington working on a commissioned painting when he received a one-line letter by horse messenger telling him that his wife was ill. He left immediately for his home in New Haven, Connecticut, but by the time he arrived, she had already died, and was buried. This single event spurred him to move from painting to the development of a rapid means of long distance communication, leading to the single-wire telegraph and Morse code.

33. Mates for does : HARTS
Nowadays a hart is a male red deer, over five years old.

36. Corner sitter’s headwear : DUNCE CAP
John Duns Scotus was theologian and scholar in the Middle Ages, responsible for many writings that were used as textbooks in British universities of the day. New ideas developed during the English Renaissance, but Duns Scotus and his followers resisted the changes. The word “dunse” came into use as a way of ridiculing those refusing to learn anything new, a precursor to our modern usage of “dunce”.

43. Drunkards : SOUSES
The word “souse” dates back to the 14th century, meaning “to pickle, steep in vinegar”. In the early 1600s the usage was applied to someone “pickled” in booze, a drunkard.

44. Products for music downloads : IPODS
The iPod is Apple’s signature line of portable media players. It first hit the market in 2001, with a hard drive-based device, now known as the iPod Classic. Later models all use flash memory, allowing a smaller form factor.

54. Tuck’s partner : NIP
“Nip and tuck” describes something so close it is hard to see who has the advantage. The term probably comes from tailoring.

55. Gangster’s gun : GAT
“Gat” is a slang word used by “hoods” for a gun. It of course comes from the Gatling gun, the precursor to the machine gun. The Gatling gun was invented by Dr. Richard J. Gatling in 1861. Apparently he was inspired to invent it, so that one man could do as much damage as a hundred, thereby reducing the size of armies and diminishing the suffering caused by war. Go figure …