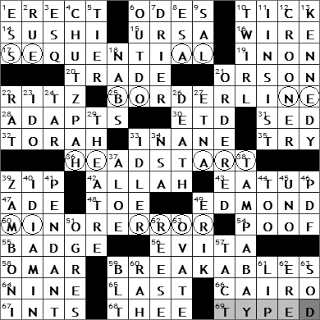 Across
6. Features of Sophocles plays : ODES
Sophocles was one of three ancient Greek tragedians whose work has survived. The first of these was Aeschylus, the second Sophocles, and the third Euripides. Sophocles is believed to have written 123 plays, including the most famous, “Antigone” and “Oedipus the King”.

10. Peeve, with “off” : TICK
The term “to tick off” came into use in the early 1900s when it meant “to reprimand, scold”. We still use it in this sense in Ireland. The usage meaning “to peeve, annoy” only came into being in the mid-seventies.

is a Japanese dish that has as its primary ingredient cooked, vinegared rice. The rice is usually topped with something, most often fish, and can be served in seaweed rolls. If you want raw fish by itself, then you have to order “sashimi”.

15. Major constellation? : URSA
The constellation called Ursa Major (Latin for “Larger Bear”) is often just called the Big Dipper because of its resemblance to a ladle, or dipper. It also resembles a plow, and that’s what we usually call it back in Ireland, the “plough”.

17. In consecutive order : SEQUENTIAL
SE-quenti-AL giving us SEAL, that can be broken.

21. Bean on the screen : ORSON
Orson Bean is an actor, perhaps best known for his appearances on television game shows in the sixties, seventies and eighties. His most famous game show role was that of a panelist on “to Tell the Truth”. Interestingly, Bean (real name Dallas Burrows) is a first cousin, twice removed, of President Calvin Coolidge.

. They’ve been around since 1934 when they were introduced by Nabisco. The name Ritz was chosen because the marketing folks felt that the association with Ritz-Carlton would evoke images of wealth and the high life.

25. Just barely legit : BORDERLINE
B-O-r-d-e-r-l-i-N-E giving us BONE, something that can be broken/fractured.

30. Consideration for when to arrive at the airport: Abbr. : ETD
Estimated Time of Departure (ETD).

32. It’s read from right to left : TORAH
Hebrew is written from right-to-left, and as the Torah is in Hebrew, it is read in that direction. The word “Torah” best translates as “teaching”, I am told.

36. What a slow person may need : HEAD START
HE-adst-ART giving us HEART, something that can be broken.

39. Nada : ZIP
The use of the word “zip” to mean “nothing” dates back to the early 1900s and is student slang for being graded zero on a test.

“Nada” is the Spanish word for “nothing”. “De nada” translates literally from the Spanish as “of nothing”, and is used to mean “You’re welcome” or “Don’t mention it”. The French have the same saying “De rien”, also translating to “of nothing” and used the same way.

42. Word written on the Saudi flag : ALLAH
The flag of Saudi Arabia

has a green background on which there is a white sword, and above the sword an inscription in white lettering. The inscription is the Islamic declaration of faith, and translates as “There is no God but Allah and Muhammad is the messenger of Allah”. Manufacturing the flag is a little tricky as it has two different sides, so that the writing reads correctly (from right-to-left) on both sides. Also, the sword which lies horizontally under the inscription, it has to point away from the flagpole on both sides. If you think about it, each side is therefore a different design.

was an English astronomer who lived at the turn of 17th and 18th centuries. In 1705 he declared that comet sightings recorded in 1456, 1531, 1607 and 1682 were in fact observations of the same comet returning to fly by Earth at regular intervals. He predicted that this comet would return in 1758, and he was right, and so the comet was named after him. Sadly, Halley didn’t live long enough to see his prediction come true.

50. Slip-up : MINOR ERROR
MI-nor e-RROR giving us MIRROR, something that can be broken.

” was the follow up musical to “Jesus Christ Superstar” written Andrew Lloyd Weber and Time Rice. Both of these works were originally released as album musicals, and very successful ones at that (I remember buying them when they first came out). For “Evita” they chose Irish singer Colm Wilkinson (or C. T. Wilkinson, as we know him back in Ireland) to play “Che”, the narrator of the piece, in the original album’s cast. Eva Peron was played by Julie Covington.

58. Epps of “House” : OMAR
Omar Epps is the actor who plays Dr. Eric Foreman on the excellent television series “House”. Prior to playing Dr. Foreman, Epps had a recurring role playing Dr. Dennis Grant on “ER”. And, in another link to the world of medicine, Epps was born in Savannah, Georgia to single mom, Dr. Bonnie Epps.

59. Fragile articles … or a hint to the things named by the circled letters : BREAKABLES

64. Cloud ___ : NINE
I don’t think that anyone is really certain of the etymology of the term “cloud nine”, but I do like this explanation … the 1896 “International Cloud-Atlas” was a long-standing reference used to define cloud shapes. The biggest, puffiest, and most comfortable looking to lie on, of all cloud shapes is cumulonimbus. And you guessed it, of the ten cloud shapes defined in the Atlas, cumulonimbus was Cloud No. 9.

is the son of two Palestinians, and was born in Cairo in 1929, the second-youngest of seven children. Arafat was beaten by his father as a child, and so he did not have a good relationship with him. Arafat did not attend his father’s funeral, nor did he visit his grave. The beatings were apparently administered because the young Arafat was repeatedly attending religious services in the Jewish quarter of Cairo. This infuriated his father, while Arafat’s explanation was that he wanted to “study the mentality” of the Jewish people.

67. Stats for a QB : INTS
Interceptions are a statistic often reported for quarterbacks in the world of American football.

3. Abbr. after a lawyer’s name : ESQ
The title “esquire” is of British origin, and is used differently today depending on whether one is in the US or the UK. Here in America, the term is usually reserved for those practicing the law (both male and female). In the UK it is a term of gentle respect, reserved for a male who has no other title that one can use. So, a mere commoner like me might receive a letter from the bank say, addressed to W. E. Butler Esq.

4. Cheekiness : CHUTZPAH
Our word “chutzpah” meaning nerve, gall or impudence, is derived from the Yiddish “khutspe”, which has the same meaning.

9. “I’ve got a mule, her name is ___” : SAL
The song “Fifteen Miles on the Erie Canal” was written in 1905. The lyrics are nostalgic, and look back to the days when traffic on the canal was pulled by mules, and bemoans the introduction of the fast-moving engine powered barges. The first line is “I’ve got an old mule and her name is Sal”.

was a great fan of golf, and was a very adept player of the game. He had a two handicap, and played in both the British and US Amateur championships. He is also one of very few players who has made a hole-in-one on the 16th at Cypress Point in Pebble Beach. In 1977 he played 18 holes at a course near Madrid in Spain, relaxing following a concert performance over in England. After winning the match with his Spanish partner, Crosby uttered his last words, “That was a great game of golf, fellas”, as he then suffered a massive heart attack and died.

13. Anthony of the Supreme Court : KENNEDY
Associate Justice Anthony Kennedy of the US Supreme Court was appointed by President Reagan in 1988. Although his decisions are viewed as largely conservative, now that Sandra Day O’Connor has retired, he is considered to be the “swing vote” on the court. He is often criticized by those on the right for not siding more often with his fellow “conservatives” on the bench.

27. Explosive Sicilian? : ETNA
Mt. Etna is the largest of three active volcanoes in Italy, about 2 1/2 times the height of its equally famous sister on the Italian mainland, Mt Vesuvius.

29. “Masterpiece ___” : THEATRE
“Masterpiece Theatre” has changed its name, you may have noticed, and is now just called “Masterpiece”. I of course love the show, because it gives me an opportunity to see great BBC productions, the stuff on which I was raised. The first airing of the show on PBS was In 1971, and the first production was the wonderful BBC mini-series “The First Churchills

for lovers of period drama).

34. Source of intelligence: Abbr. : NSA
The National Security Agency was set up in 1952 by President Truman, a replacement for the Armed Forces Security Agency that had existed in the Department of Defense since 1949. The agency has always been clouded in secrecy. Even the 1952 letter from President Truman that set up the agency was kept under wraps from the public for over a generation.

37. Sunburn soother : ALOE
The so called “true aloe” is aloe vera, a succulent plant that grows in relatively dry climates and one native to Africa. The plants leaves are full of biologically active compounds that have been studied extensively. Regardless of the studies, aloe vera has been used for centuries in herbal medicine, mainly for topical treatment of wounds.

38. Team that has a tankful of rays in the back of its ballpark : TAMPA BAY
The Tampa Bay Rays is a relatively “young” franchise, being formed in 1998. They are apparently still working on building the team, as it has finished in last place in the Eastern Division of the American League in all but three seasons so far.

39. It’s driven over the ice between periods : ZAMBONI
The first ice resurfacing machine was developed in 1949, by none other than Frank Zamboni. The machine works by simultaneously executing a number of tasks. First, the surface of the ice is scraped off by a sharp blade. Next the ice is “washed” with water sprayed from the front of the Zamboni, and that wash water is vacuumed back up and filtered to remove impurities. Water is then reapplied to the scraped surface by a wet towel dragging behind the machine, forming a new skating surface.

” : IDI AMIN
“The Last King of Scotland” is a 2006 film adaptation of a 1998 novel of the same name by Giles Foden. The story tells of a Scottish doctor who was employed by Idi Amin. The title of the piece comes from the fact that Idi Amin offered his services as King of Scotland, should he ever be needed.

45. Game featuring 108 cards : UNO
In my youth I remember being taught a great card game by a German acquaintance of mine called Mau Mau. Years later I discovered that Uno is basically the same game, but played with a purpose-printed deck, instead of the regular deck used for Mau Mau.

46. Alternative to a print version: Abbr. : PDF
Portable Document Format (PDF) is a file format introduced by Adobe Systems in 1993. PDF documents can be shared between users and read using many different applications, making them more universally accessible than documents saved by one particular program.

“. Deservedly so, it is the longest running musical in the history of Broadway. And now there is a sequel, which I would dearly love to see, so let’s hope it gets over here soon. “Love Never Dies” opened in the West End in London in March 2010, but opening in the US has been delayed while Lloyd Weber recovers from prostate cancer surgery.

51. Shrek and Fiona, in “Shrek” : OGRES
Before “Shrek” was a successful movie franchise, it was a children’s picture book called “Shrek!” authored and illustrated by William Steig. The title “Shrek!” came from the German/Yiddish word Schreck, meaning “fear” or “terror”.

52. Witherspoon of “Legally Blonde” : REESE
Reese is not actually Ms. Witherspoon’s given name. She started out life as Laura Jeanne Witherspoon. Reese is her mother’s maiden name.

59. Alternative to a Philly cheesesteak : BLT
The BLT (bacon, lettuce and tomato) is the second most popular sandwich in the US, after the plain ham sandwich.