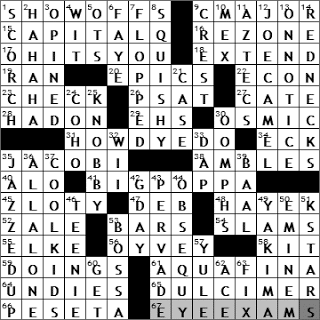 Across
9. It’s all ivory and no ebony : C MAJOR
In music, the key of C major has no sharps or flats, so the scale can be played with all white (ivory) keys on the piano keyboard, without having to resort to the use of black (ebony) keys.

is a medication designed to relieve the symptoms of a common cold. It contains loads of ingredients that will make you sleepy, so if you are taking it, it’s safer to do so at night. It’s a Proctor & Gamble brand, and the equivalent, non-drowsy formula is known as DayQuil.

18. Opposite of abridge : EXTEND
The words “abridge” and “abbreviate” both come from the same Latin root (the former via French) “abbreviare”, meaning to “make short”.

20. Some westerns : EPICS
Some western movies are epics, like perhaps “How the West Was Won”, and “Once Upon a Time in the West

22. Class with graphs, for short : ECON
There are lots of graphs presented in an economics class.

23. Danger for a king : CHECK
In the game of chess, when the king is under immediate threat of capture, it is said to be “in check”. If the king cannot escape from check, then the game ends in “checkmate”, and the player in check loses. In the original Sanskrit game of chess, the king could actually be captured. Then a rule was introduced requiring that a warning be given if capture was imminent (today we announce “check!”) so that an accidental, early ending to the game doesn’t occur.

26. Its max. score is 240 : PSAT
I think the acronym PSAT used to stem from Preliminary Scholastic Aptitude Test.

” is a great film from 2004, a biographical piece about much of the life of aviation pioneer Howard Hughes. Leonardo DiCaprio plays the title role, with Cate Blanchett playing a very credible Katharine Hepburn, Hughes’s lover with whom he lived for quite some time. Blanchett won a very much deserved Oscar for Best Supporting Actress for her performance.

31. Hayseed’s greeting : HOW D’YE DO
“Hayseed” is a slang term for a country bumpkin, a yokel. None of the terms are very flattering, I’d say.

34. Luther opponent Johann : ECK
During the Protestant Reformation in the 16th and 17th centuries, as Martin Luther was attacking the policies of the Catholic Church, Johann Eck was one of the leading defenders of Catholicism. The two had public debates, with Luther generally coming out ahead.

35. Derek who played Claudius in “I, Claudius” : JACOBI
“I, Claudius” is a 1934 novel written by Robert Graves, written in the form of an autobiography of Emperor Claudius of Rome. He wrote a sequel in 1935, “Claudius the God”. Both books were adapted by the BBC into a fabulous series that went by the name “I, Claudius

In the BBC’s “I, Claudius”, the English actor Sir Derek Jacobi won much praise for his performance in the title role.

40. Havana greeting : ALO
“Alo” is an alternative one can use to “hola” when one wants to say “hello” in Spanish.

41. 1995 platinum rap hit that starts “To all the ladies in the place with style and grace” : BIG POPPA
“Big Poppa

The Notorious B.I.G. was the stage name of rap star Christopher Wallace. While at the height of his fame, Wallace was killed in a drive-by shooting in Los Angeles, a murder case that has never been solved. The 2009 movie “Notorious” is about Wallace’s life, and stars fellow rap artist Jamal Woolard (aka Gravy) in the title role.

45. Polish capital : ZLOTY
The zloty is the currency of Poland, with word “zloty” translating into English as “golden”. The zloty has been around since the Middle Ages.

48. Salma of the screen : HAYEK
Salma Hayek is a Mexican actress, the first Mexican national to be nominated for a Best Actress Oscar, for her portrayal of painter Frida Kahlo in the 2002 movie “Frida”.

52. Big name in retail jewelry : ZALE
The first Zale’s jewelry stores was opened by Morris and William Zale, and Ben Lipshy, in Wichita Falls, Texas, in 1924. Zale’s became successful largely by offering credit to their customers, a revolutionary concept at the time.

55. Golden Globe winner Sommer : ELKE
Elke Sommer is a German-born actress, who was at the height of her success on the silver screen in the sixties, winning a Golden Globe as Most Promising Newcomer Actress for her role opposite Paul Newman in 1964’s “The Prize”. She also sings and has released several albums. Now she focuses on painting, producing artwork that is strongly influenced by Marc Chagall.

58. One with notions : KIT
In the world of sewing, notions is a term used for a collection of small objects and accessories. So (pun intended!), in a notions kit there might be buttons, collar stays and other accessories, as well as small sewing tools like thread, pins, and marking pens. New to me …

is Pepsico brand of bottled water that is just regular public water that has been purified.

Fiji Water, as you might imagine, is a brand of water from the Fiji Islands.

65. Literally, “sweet song” : DULCIMER
There are two types of dulcimer, both of which are stringed instruments. The hammered dulcimer is composed of a set of strings stretched over a wooden sounding board. A musician plays the hammered dulcimer by striking the strings with small hammers. On the other hand, the Appalachian dulcimer

is a fretted string instrument, not unlike a zither. A musician plays it by laying the instrument flat across the lap and plucking the strings with one hand, while pressing on the frets with the other.

66. Bygone currency : PESETA
The peseta is the former currency of Spain, replaced by the euro in 2002.

was an Irish author and cleric. He is most famous perhaps for his 1726 novel “Gulliver’s Travels”, but we Irishmen remember him also as the Dean of St. Patrick’s Cathedral in Dublin. He was renowned for his wit and satire.

5. Decisive periods, briefly : OTS
In many games one needs Over-Time to arrive at a decisive score.

was famously married to televangelist (and convicted felon) Jim Bakker. She had quite the look on television, with layer upon layer of makeup, long (false) eyelashes and tattooed eyebrows.

8. Like a wet Nerf ball : SQUISHY
Nerf is the name given to a series of toys made out of a soft material, designed for “safe” play indoors. The Nerf material is used as ammunition, darts, and balls for example. The acronym NERF stands for Non-Expanding Recreational Foam.

9. Roadrunner feature : CREST
The roadrunner species of bird has a very distinctive crest on its head. Roadrunners can and do fly, but they mostly move around on the ground. They can run along at speeds up to 20 mph!

12. Much-maligned mascot : JOE CAMEL
The advertising mascot for Camel cigarettes was officially known as “Old Joe”, but was popularly known as “Joe Camel”. Joe originated in the seventies, in an advertising campaign that ran only in Europe, where he sometimes was depicted wearing a French Foreign Legion cap. He was imported to the US in 1988 on the occasion of the 75th anniversary of the Camel brand. The big controversy surrounding the use of the camel character came when a 1991 study found that 5-6 year old children could recognize Joe Camel more readily than either Mickey Mouse or Fred Flintstone. Also, soon after Old Joe was introduced in the US, the Camel brand’s share of the illegal market to underage smokers went from 1% to just under 33%.

24. Alaskan salmon : COHO
The Coho salmon is silver along the side of its body, but only during the phase of its life while it is in the ocean. When spawning, and heading up into a freshwater river, the Coho has bright red sides.

32. Boom Blox console : WII
The Wii is the biggest selling game console in the world. Two distinguishing features are the impressive wireless remote control, and its WiiConnect24 system which allows the console get messages and updates wirelessly in standby mode. I have my kids unplug the darn thing when they aren’t using it, as even in standby mode it sucks up bandwidth on my wireless network here at the house.

is a puzzle video game produced for the Wii platform, an Electronic Arts product developed in collaboration with famed movie director Steven Spielberg.

33. Fist bump : DAP
The dap is a form of handshake, nowadays often a complicated, showy routine of fist bumps, slaps and shakes. Some say that “dap” is an acronym standing for “Dignity And Pride”.

39. Ancient fertility god : BA’AL
Ba’al can actually refer to any god, and sometimes even human officials as it can also be used as an honorific title. Ba’al can also be known as Hada, a god of the rain, thunder, agriculture and fertility.

42. Victorian’s greeting : G’DAY
Victoria is the most densely populated state in Australia, with most inhabitants living in the state capital of Melbourne. Just like the Australian state of Queensland, Victoria was named for Queen Victoria, the British monarch at the time the state was founded.

44. Burial rite : OBSEQUY
An obsequy is a funeral rite or ceremony. The term has been around since the 14th century and comes from the Latin “obsequium” meaning “compliance, dutiful service”.

” was first released in 1960, and was a number one hit that year for Brian Hyland. At the time, bikini bathing suits were considered very risque in society, but their popularity grew dramatically, with the song getting a lot of the credit for the new-found acceptance.

49. Washington city or county : YAKIMA
The city and county of Yakima lie southeast of Mount Ranier in the state of Washington. The Yakima Valley is recognized as one of the best apple-producing regions in the world, and it also produces three quarters of all the hops grown in the US.

” : EMINEM
Eminem’s real name is Marshall Mathers, a native of Saint Joseph, Missouri. He grew up poor, raised by his mother alone, as the family was abandoned by his father when he was 18 months old. Marshall and his mother moved around the country before settling in a suburb of Detroit. He didn’t do well at school, and dropped out at he age of 17. But, in the end, he made it very big …

51. Orange dwarfs : K STARS
Stars can be classified according to their spectral profile. In effect, the color of the light emitted by the star indicates the temperature of the star. Stars are then classified into groups with similar colors or temperatures. The classes of stars are names with the letters, O, B, A, F, G, K and M. K stars are orange in color, making them slightly cooler that our own sun.

53. Nova lead-in : BOSSA
Bossa Nova is style of music from Brazil that evolved from samba. The most famous piece of bossa nova is the song “The Girl from Ipanema”.

57. Time to visit a lot of trees : YULE
“Yule” celebrations coincide with Christmas, and the words “Christmas” and “yule” have become synonymous in much of the world. Yule, though, was originally a pagan festival celebrated by Germanic peoples. The name “yule” comes from the Old Norse word “jol” that was used to describe the festival.