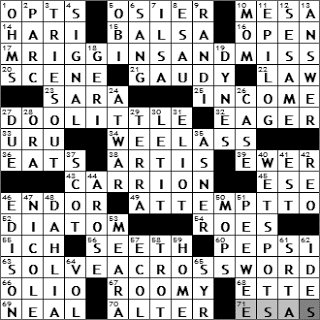 THEME: MR ‘IGGINS AND MISS – DOOLITTLE – ATTEMPT TO – SOLVE A CROSSWORD … all the theme answers are common words, but each themed clue is the Cockney answer to a different clue (i.e. an answer with the “h” dropped) e.g. OSIER (h-osier), EATS (h-eats), EWER (h-ewer), ALTER (h-alter)
COMPLETION TIME: N/A (forgot to start the clock!)
ANSWERS I MISSED: 0

10. Badlands formation : MESA
What’s the difference between a butte and a mesa, I hear you cry! Both are hills with flat tops, but a mesa has a top that is wider than it is tall. A butte is a much narrower formation, taller than it is wide. Now we know …

was a stage name. Margaretha Geertuida Zella was born in the Netherlands in 1876. After an unsuccessful and somewhat tragic marriage, Zella moved to Paris in 1903 where she struggled to make a living. By 1905 she was working as an exotic dancer, and using the name Mata Hari. She was a successful courtesan, notably moving in the various circles of high-ranking military officers. She apparently worked as a double agent, both for the French and the Germans. When she was found guilty by the French of passing information to the Germans, she was tried, found guilty and executed by firing squad in 1917, at the age of 41.

15. Model glider material : BALSA
Balsa is a very fast growing tree that is native to parts of South America. Even though balsa wood is very soft, it is actually classified as a hardwood, the softest of all the hardwoods (go figure!). Balsa is light and strong, so is commonly used in making model airplanes. Amazingly, in WWII a full-size British plane, the de Havilland Mosquito, was built largely from balsa and plywood. No wonder they called it “The Wooden Wonder” and “The Timber Terror”.

Mr. ‘Iggins and Miss Doolittle attempt to solve a crossword.

“. The musical spun off the wonderful 1964 film of the same name

“. The title “Spamalot” comes from a line in the original movie: “we eat ham, and jam and Spam a lot”.

“. In 2005 she won a Tony Award for her portrayal of the Lady of the Lake in the original production of “Spamalot” on Broadway.

33. Neighbor of Arg. : URU
Argentina is a neighbor of Uruguay.

38. MGM motto ender : ARTIS
It seems that the phrase “art for art’s sake” has its origins in France in the nineteenth century, where the slogan is expressed as “l’art pour l’art”. The Latin version “Ars gratia artis” came much later, in 1924 when MGM’s publicist chose it for the studio’s logo, sitting under Leo the lion. Who’d o’ thunk it?

43. Buzzard’s fare : CARRION
The word “carrion” comes from the Old French “charogne” meaning “corpse”, and is ultimately derived from the Latin “caro”, the word for “meat”.

45. Suffix with Brooklyn : ESE
The New York dialect of English is sometimes called Brooklynese, I believe.

46. Biblical witch’s home : ENDOR
According to the First Book of Samuel, the Witch of Endor called up the ghost of the deceased Samuel.

52. Simple bit of plankton : DIATOM
The diatom is a very common type of plankton. Most diatoms are composed of just one cell, but can band together and form filaments or ribbons that are in effect colonies of individual diatoms. Diatoms are unique in that they have cell walls made up of silica (basically sand), giving the diatoms a crystalline appearance.

54. Some reddish deer : ROES
Roe deer are found mainly in Europe. They would be the deer shown on television when Robin Hood was out hunting in Sherwood Forest.

60. “Twice as much for a nickel” sloganeer, once : PEPSI
In 1936, during the Great Depression, Pepsi introduced a 12-ounce bottle priced at 10 cents. Although quite popular at first, sales became sluggish. Pepsi decided to slash the price in half to five cents, and announced it in a radio jingle:
“Pepsi-Cola hits the spot
Twelve full ounces, that’s a lot!
Twice as much for a nickel, too
Pepsi-Cola is the drink for you.”
The rival drink Coca-Cola, it came in a 6-ounce bottle for five cents, so sales soared as consumer were getting twice as much sugary sweetness for the same price.

66. Hodgepodge : OLIO
Olio is a term meaning a hodgepodge or a mixture, coming from the mixed stew of the same name. The stew, in turn, takes its name from the Spanish “olla”, the name of the clay pot used to make the stew.

67. Like limousines : ROOMY
The word “limousine” actually derives from the French city of Limoges. The area around Limoges is called the Limousin, and it gave its name to a cloak hood worn by local shepherds. In early motor cars, a driver would sit outside in the weather, while the passengers would sit in the covered compartment. The driver would often wear a limousin-style protective hood, giving raise to that type of transportation being called a “limousine”. Well, that’s how the story goes anyway …

69. “Hud” Oscar winner : NEAL
I don’t like many westerns, to be honest, but the 1963 movie “Hud” is a classic. It stars Paul Newman and Patricia Neal, and is an adaptation of a novel by Larry McMurtry called “Horseman, Pass By”.

70. Professor says “Equine restraint,” pupil suggests … : ‘ALTER
An “equine restraint” is a halter, or as a Cockney would say … ‘alter.

71. Those, in Toledo : ESAS
Toledo is a city in central Spain.

Down
1. Resistance units : OHMS
The unit of electrical resistance is the ohm, named after Georg Simon Ohm, the German physicist. Ohm was the guy who established experimentally that the amount of current that flowed through a circuit was directly proportional to the voltage applied, (V=IR) a relationship that is now called Ohm’s Law.

4. Prepare to turn : SIGNAL
I wish everyone would use their turn signals.

Back in Ireland we don’t call them “turn signals”, but rather “indicators”.

5. Kobe sash : OBI
Kobe is a city on the island of Honshu in Japan, and yes, basketball star Kobe Bryant is named after the Japanese city.

An obi is a sash worn in from dress in Japan, by both men and women, although there tend to be many different ornate versions for women.

7. “Play it, Sam” speaker : ILSA
Ilsa Lund was of course the role played by Ingrid Bergman in the 1942 movie “Casablanca

8. Genesis twin : ESAU
Esau was the twin brother of Jacob, the founder of the Israelites. When their mother, Rebekah gave birth to the twins, “the first emerged red and hairy all over (Esau), with his heel grasped by the hand of the second to come out (Jacob)”.

9. “Amazing” magician : RANDI
James Randi is a retired Canadian-American magician who had a stage career using the name “The Amazing Randi”. Now he spends his time investigating the paranormal, or in fact mainly challenging claims of paranormal activity. If you’re interested, the James Randi Educational Foundation is offering one million dollars to anyone who can demonstrate paranormal activity under controlled test conditions.

” television series, there was a narration that summarized the background to the show. It started off “The Fugitive, a QM Production — starring David Janssen as Dr. Richard Kimble: an innocent victim of blind justice, falsely convicted for the murder of his wife …” Those words were read by actor William Conrad, who made a name for himself in his detective series playing the portly “Cannon”.

Oh, and the epilog (or was it epilogue?) came at the end of each episode, and I think that was narrated by William Conrad too.

12. Halvah ingredient : SESAME
Halvah is a sweet confection, common across Asia but best known here in Jewish cuisine, I think.

18. Ex-Spice Girl Halliwell : GERI
Geri Halliwell was called Ginger Spice because of her red hair when she was with the Spice Girls, although as she was quite a bit older than the rest of the group, she was less charitably sometimes referred to as “Old Spice”.

19. Force units : DYNES
A dyne is a unit of force. The name “dyne” comes from the Greek “dynamis” meaning power or force. An erg is a unit of energy, or mechanical work. “Erg” comes from the Greek word “ergon”, meaning “work”. Ergs and dynes are related to each other in that one erg is the amount of energy need to move a force of one dyne over a distance of one centimeter.

26. Docket item : CASE
A docket is the official summary of proceedings in a court of law. The term is sometimes uses (informally) to refer a court’s calendar of cases.

27. Directly : DUE
For example, due west, is directly west.

“. Eliot’s collection of whimsical poems was published in 1939, and was personal favorite of Weber as he was growing up. “Cats” is the second longest running show in Broadway history (“Phantom of the Opera” is the longest, and is still running, deservedly so, in my humble opinion).

35. Ed of “The Bronx Zoo” : ASNER
“The Bronx Zoo” was an NBC series that only ran for two series back in 1987. Ed Asner played a high school principal of an inner-city school.

41. Jocular suffix with “best” : EST
As in the New York Times has the “bestest” crossword …

42. Flying Cloud automaker : REO
REO was founded by Ransom E. Olds (hence the name REO) and among its most famous models were the REO Royale, and the REO Flying Cloud.

46. “Speaking machine” developer : EDISON
Edison has a patent for a “Speaking Machine”, which was actually the first phonograph. He demonstrated the viability of the device in 1878. Its key components were a stylus that picked up “sound” from a rotating, phonograph cylinder.

” is a reality TV show that ran from 2003 to 2007. It showed little rich girls Paris Hilton and Nicole Richie trying to do manual labor and working “real” jobs. I wonder how they’d do writing a crossword blog?

48. Mexico’s national flower : DAHLIA
The Dahlia is a flowering plant native to Mexico and Central America. It was named the national flower of Mexico relatively recently, in 1963.

50. Beatlesque dos : MOPS
That Beatles haircut was known as the “mop-top”, because it resembled a mop.

53. Anne of “Archie Bunker’s Place” : MEARA
Anne Meara has been married to follow comedic actor Ben Stiller since 1954. They are the parents of actors Ben and Amy Stiller. Meara costarred with Carroll O’Connor and Martin Balsam in the eighties sitcom “Archie Bunker’s Place”, a spin off from “All in the Family”.

59. Pentagonal plate : HOME
Back in the day, baseballs home plate was a dangerous place to slide into, as it was made of stone, iron or wood. Bob Keating was a Major League pitcher who played one whole game for Baltimore Orioles in 1887. After he had to quit the game due to injury, he started a bicycle manufacturing company, and became an inventor. Keating invented the rubber home plate

that is still in use today.

61. Madrid Mlle. : SRTA
A young lady in France is addressed as “mademoiselle”, and in Spain as “senorita”.

And of course, Julius Caesar was assassinated on the Ides of March.

65. Onetime U.A.R. member : SYR
The UAR, United Arab Republic, was a union between Egypt and Syria, made in 1958 and dissolved in 1961 when Syria pulled out of the arrangement.