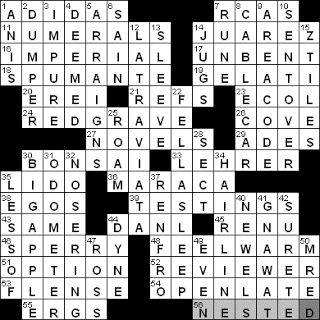 1. Athletic shoe manufacturer : ADIDAS
Adidas dates back to when Adolf “Adi” Dassler started making his own sports shoes in his mother’s laundry room in Bavaria after returning from WWI. With his brother, Adi founded Dassler shoes. The companies big break came in 1936 at the Berlin Olympics, when Adi persuaded American sprinter Jesse Owens to use his shoes, and with the success of Jesse Owens came success for the fledgling shoe company. After WWII the brothers split, acrimoniously. Adi’s brother, Ru-dolf Da-ssler, formed “Ruda” shoes (later to become Puma), and Adi Das-sler formed “Adidas”.

14. Sister city of El Paso : JUAREZ
The Mexican city sitting across the border from El Paso is more correctly called Ciudad Juarez. Juarez used to be called El Paso del Norte (the North Pass). It was to be the younger settlement on the northern side of the Rio Grande which would retain the “El Paso” name.

18. Asti ___ : SPUMANTE
Asti is in the Piedmont region of northwestern Italy. It is perhaps most famous for its Asti Spumante sparkling white wine.

is the Italian version of American ice cream, differing in that it has a lower butterfat content.

20. “… kissed thee ___ killed thee”: Shak. : ERE I
In William Shakespeare’s “Othello”, as the title character kills himself he declares:
I kissed thee ere I killed thee. No way but this,
Killing myself, to die upon a kiss.”

” is a British film released in 1966, probably more famous for its title song than is storyline. Lynn Redgrave, sister of actress Vanessa Redgrave, played Georgy, and the fabulous Australian group the Seekers, they sang the hit “Georgy Girl”.

27. “Jane Eyre” et al. : NOVELS
“Jane Eyre” is of course the novel written by Charlotte Bronte, and published as “Jane Eyre. An Autobiography” under the pen name Currer Bell. It’s a little too dark for my taste …

30. Diminutive tree : BONSAI
The term “bonsai” is used more correctly to describe the Japanese art of growing carefully shaped trees in containers. Bonsai has come to be used as the name for all miniature trees in pots.

33. “Who’s Next?” singer/songwriter/satirist : LEHRER
Tom Lehrer is an American singer-songwriter, famous for writing humorous songs and parodies. He wrote the “Who’s Next?” in the sixties, a song about nuclear proliferation.

35. Venice Film Festival locale : LIDO
The Lido de Venezia is a famous sandbar, about 11 kn long, in Venice, Italy. It may be a sandbar, but it is home to about 20,000 residents, as well as the Venice Film Festival that takes place there every September. The Lido is also the setting for Thomas Mann’s famous novel “Death in Venice”.

36. Rhythm band instrument : MARACA
Maracas are percussion instruments native to Latin America. They are constructed from a dried shell, like that of a coconut, to which a handle is attached. The shell is filled with dried seeds or beans, and shaken.

46. Gyro inventor : SPERRY
Elmer Sperry was a great inventor, most famously coming up with the gyrocompass in partnership with Herman Anschutz-Kaempfe. His gyroscopic compasses were used by the US Navy, a great stamp of approval for his Sperry Gyroscope Company founded in 1910.

53. Remove skin from, as whales : FLENSE
Flensing is the removal of the outer skin of a whale, including the blubber. It sounds very gruesome …

55. Pieces of work? : ERGS
An erg is a unit of energy, or mechanical work. “Erg” comes from the Greek word “ergon”, meaning “work”.

Down
1. Tropical avians : ANIS
The tropical bird called the ani is related to the cuckoo, although they don’t go around robbing other birds nest as do the cuckoos.

5. Forces to answer an indictment : ARRAIGNS
In the law, to arraign someone is to call the person accused before a court to answer charges that have been brought.

6. Bygone pitching star Johnny : SAIN
Johnny Sain was a pitching star associated with the Boston Braves baseball team, with most of his success coming just after WWII. He faced two great players at important times in their careers. He was the last person to pitch against Babe Ruth in a game, and the first to pitch in the Majors against Jackie Robinson.

7. Viking letter : RUNE
A rune is a character in an alphabet (including the Viking alphabet), believed to have mysterious powers.

” was originally titled “Violetta” after the main character in the piece. The title “La Traviata” translates into “The Woman Gone Astray”, reflecting Violetta’s life as a courtesan.

15. Scrabble 10-pointers : Z TILES
The game of Scrabble has been around since 1938, the invention of an architect named Alfred Moshoer Butts. Butts determined how many tiles of each letter, and the point value of each tile, by analyzing letter distributions in publication like the New York Times.

turf : BIG APPLE
Apparently the first published use of the term “Big Apple” to describe New York City dates back to 1909. Edward Martin wrote in his book “The Wayfarer in New York” the following:
“Kansas is apt to see in New York a greedy city. . . . It inclines to think that the big apple gets a disproportionate share of the national sap.”

37. Brad of “Sleepers” : RENFRO
Brad Renfro was an American actor, perhaps most famous for his first big role playing the young boy in the title role of 1994’s “The Client”. He also had a major role in another legal drama, the 1996 film “Sleepers”. Young Mr. Renfro had a troubled life though, running afoul of the law due to drug abuse. He died when he was only 25 years old, in 2008, from a heroin overdose.

40. Uprights on staircases : NEWELS
Newels are the upright posts that support the handrail running alongside a staircase.

42. Employer of Clouseau : SURETE
Inspector Jacques Clouseau is of course the wonderful detective in “The Pink Panther” series of films. The definitive player of the role was English actor Peter Sellers. Clouseau worked for the French Surete, the detective branch of the French National Police.

44. Newton fraction : DYNE
A dyne is a unit of force. The name “dyne” comes from the Greek “dynamis” meaning power or force.

47. “ER” doctor : ROSS
You know, I’ve never seen “ER”. The most famous doctor in the TV show has to have been Dr. Doug Ross, played by George Clooney, the role that really gave Clooney his big break.

49. Like each answer in this puzzle – also each word in each clue – in length : EVEN