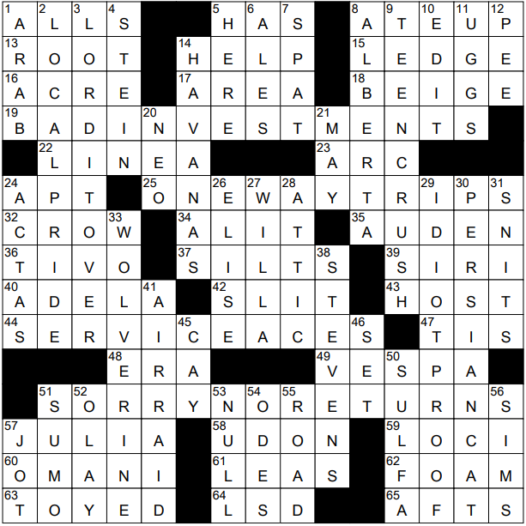 Constructed by: Jessie Bullock & Ross Trudeau
Edited by: Will Shortz

Themed answers are things with NO RETURNS:

The proverb “All is fair in love and war” has been attributed to English writer John Lyly, and is from his book “Euphues: The Anatomy of Wit”. “Euphues” is the source of our word “euphemism”.

15 Place for pigeons to sit : LEDGE

24 Like the anagram “I’ll make a wise phrase” for “William Shakespeare” : APT

39 One responsive to voice commands : SIRI

Adela Rogers St. Johns was a journalist, novelist and screenwriter from Los Angeles. St. Johns’ father was a good friend of William Randolph Hearst, and she secured her first job working for Hearst as a reporter on the “San Francisco Examiner”. St. Johns was most famous as what was then called a “girl reporter”, in the twenties and thirties. Much later in her life, she was a regular guest on the “Tonight Show” hosted by Jack Paar.

Actress and comedian Julia Louis-Dreyfus is an alum of the sketch show “Saturday Night Live”, in which she appeared from 1982 to 1985. Her really big break came when she was chosen to play Elaine Benes on “Seinfeld”. More recently, Louis-Dreyfus can be seen playing Vice President Selina Meyer on the HBO comedy show “Veep”.

“Locus” (plural “loci”) is Latin for “place”, and is used in English with the same meaning. The term can also be used to describe a center of power or activity. In mathematics, a locus is a set of points that satisfy some property. For example, a locus might be a straight line, part of a line, a surface, or perhaps a curve.

11 Boots from Down Under : UGGS

12 Difference between icky and picky? : PEE

“Icky” becomes “picky” with the addition of a letter P (pee).

The production of all cigars and cigarettes in Cuba is managed by a state tobacco company called Cubatabaco. The marketing and distribution of all Cuban tobacco products is handled by Habanos, which is a subsidiary of Cubatabaco. Habanos works with just one company in each country where it markets products. As a result, customers seeking out genuine Cuban cigars know that there is a limited and defined list of suppliers around the world.

21 Shortest month of the year : MAY

American novelist Willa Cather wrote what’s referred to as the “prairie trilogy”, books that tell the story of Swedish immigrants living in Nebraska. The titles in the trilogy are “O Pioneers!”, “The Song of the Lark” and “My Ántonia”. Cather won the Pulitzer Prize for another novel “One of Ours”, which is set in Nebraska and the French battlefields of WWI.

“Sulfa drug” is a common term used for sulphonamides. Many sulfa drugs have antibacterial properties, and were the first antimicrobial drugs developed. The first sulphonamide introduced to treat bacterial infections was named Prontosil, and was developed by Bayer AG in Germany.

55 Answer to the riddle “What can go up and down without moving?” : ROAD