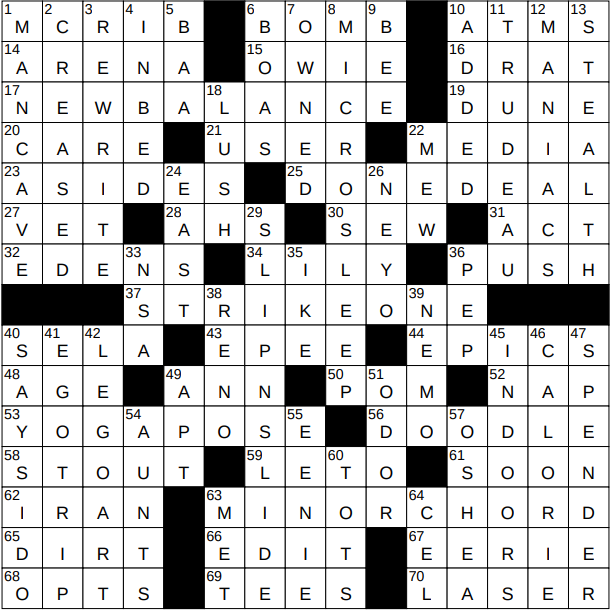 Themed answers each end with something one might STRIKE:

The McDonald’s McRib sandwich is based on a pork patty. There isn’t any pork rib in the patty though. It is primarily made up of pork shoulder meat reconstituted with tripe, heart and stomach tissue. Enjoy …

2021’s epic film “Dune” is the first of a two-part adaptation of Frank Herbert’s 1965 novel of the same name. The version of “Dune” did a lot better than the 1984 big-screen adaptation of the same novel, which really flopped at the box office.

“Fait accompli” is a French term that translates literally as “accomplished fact”. It is used in English to mean “a done deal”.

The Easter lily has distinctive trumpet-shaped, white flowers. The plant gets its name from its use as a symbol in Christian traditions, synbolizing the resurrection of Christ at Easter.

“The Faerie Queene” is an epic poem by Edmund Spenser. It is one of the longest poems written in the English language.

Jared Leto is an actor and musician. In the world of music, he is the lead singer and rhythm guitarist for the rock band 30 Seconds to Mars. In the film world, one of his most critically acclaimed roles was that of a heroin addict in “Requiem for a Dream”. Leto also appeared in “American Psycho”, “Panic Room” and “Lord of War”. He won a Best Supporting Actor Oscar for his performance in 2013’s “Dallas Buyers Club”, in which he portrayed a transgender woman.

Experts, unlike me, can wax lyrical on the technical differences between major and minor keys and scales. To me, music written in major keys is very strident, often very joyful and “honest”. Music written in minor keys (usually my favorite) is more feminine, more delicate and often quite sad.

1 Counterpart of a “she-shed” : MAN CAVE

29 Toy that attaches to a garden hose : SLIP ‘N SLIDE

There’s a lot of talk these days about how much golf is played by US presidents. One of the most enthusiastic golfers to sit in the Oval Office was President Dwight D. Eisenhower (DDE). “Ike” loved the game so much that he even played through the winter. He had his golf balls painted black so that he could see them against the snow on the ground.

I wish we’d stop using the term “calorie”, because it is so confusing. In terms of physics, a calorie is the amount of energy needed to raise the temperature of one gram of water by one degree celsius (at one atmosphere of pressure). The so-called “food calorie” is one thousand times as large, as it is defined in terms of kilograms instead of grams. In attempts to differentiate between these two definitions, the former is sometimes referred to as the “small calorie” and is given the symbol “cal”. The latter is referred to as the “large calorie” and given the symbol “Cal”, with a capital C. If only we’d use the SI system of units, we’d be thinking in just joules, instead of large and small and food calories.

64 Sheet of an animated cartoon : CEL