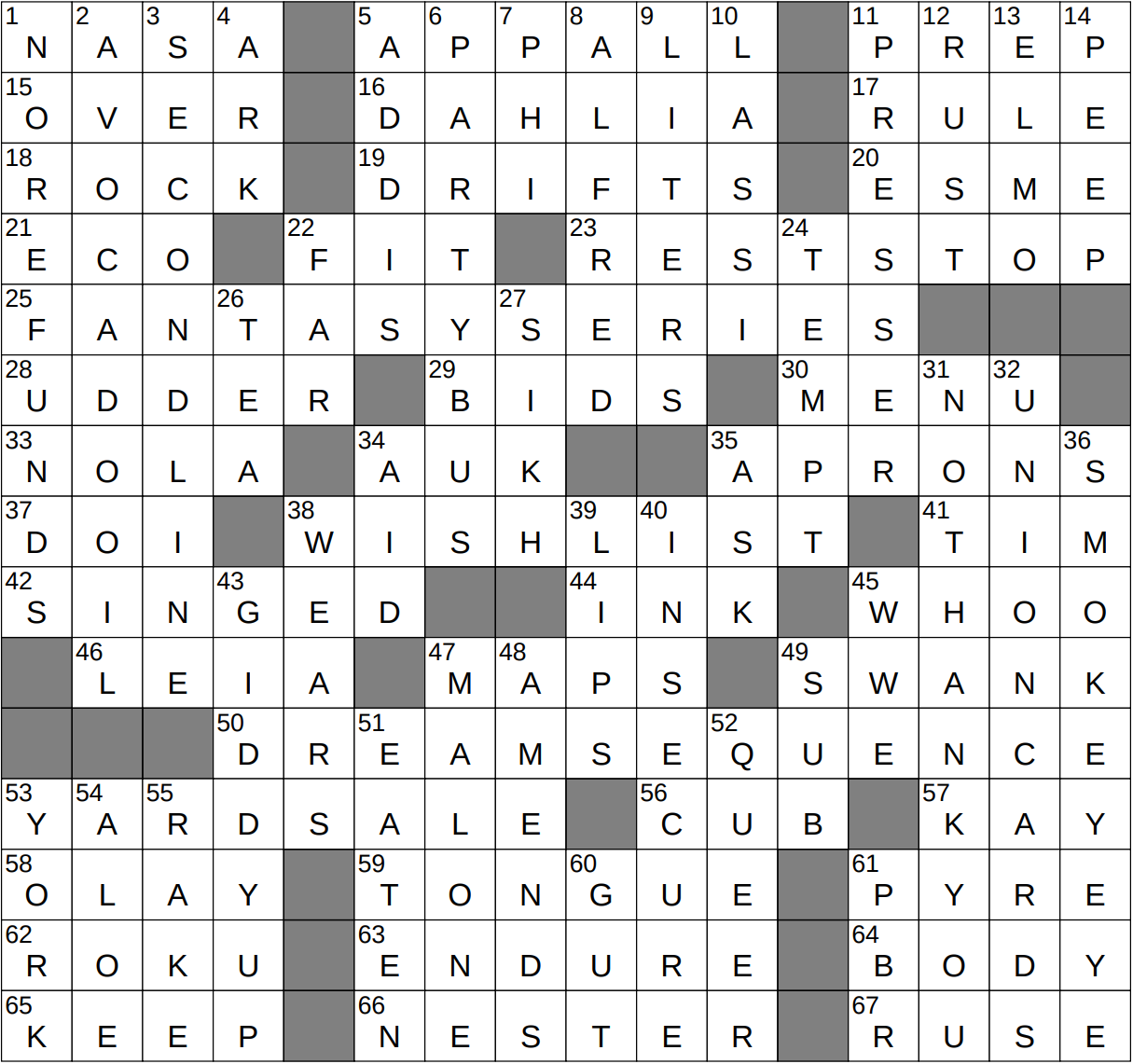 Constructed by: Brooke Husic & Erik Agard
Edited by: Will Shortz

The dahlia is a flowering plant native to Mexico and Central America. It was named the national flower of Mexico relatively recently, in 1963. The plant was given the name “dahlia” in 1791, in honor of Swedish botanist Anders Dahl.

22 What jigsaw puzzle pieces do : FIT

John Spilsbury was an English cartographer who is best remembered for inventing jigsaw puzzles. Spilsbury’s puzzles were maps affixed to wood, and carved out country by country. They were intended for educational purposes.

33 The Big Easy, by another nickname : NOLA

Puffins are seabirds found in the North Atlantic and North Pacific oceans. They feed primarily by diving into the water to catch fish, and are known for their ability to swim underwater using a “flying” technique.

In Old French, a “naperon” was a “small table-cloth”. The term was absorbed into English as “napron”, describing a cloth used to cover the front of a person at work. Over time, “a napron” was heard as “an apron”, giving us our contemporary noun “apron”.

Owls have 14 vertebrae in their necks (compared to our 7). The extra bones in the neck, along with other adaptations allow owls to rotate the head and neck about 270 degrees.

46 She used the Force multiple times in “The Last Jedi” : LEIA

Roku is a manufacturer of digital media players that allow access to audio and video programming over the Internet that is shown on television. Roku was founded in Los Gatos, California in 2002 by Anthony Wood. Wood chose the company name “Roku” as it is the Japanese word for “six”, and Roku is the sixth company that Wood founded. For what it’s worth, Rokus used to be my streaming device of choice …

We love our children, but we love our empty nest too …

4 Chamber oriented so that those who face it also face Jerusalem : ARK

7 The Sixers, on scoreboards : PHI

Lassi is a yogurt-based drink from India. Popular variants are namkeen lassi (which is salty), sweet lassi and mango lassi. There is even a bhang lassi, which is infused with a liquid derivative of cannabis.

In 2002, The Muppet Elmo got to testify before a US House subcommittee. Elmo’s goal was to get an increase in funding for music education. In the transcript of the hearing, his statements are ascribed to “Elmo Monster” and “Mr. Monster”.

Peeps are marshmallow candies, usually in the shapes of chicks and bunnies, primarily sold around the Easter holiday. Peeps were introduced in 1952 by a Russian immigrant called Sam Born whose company “Just Born” makes the candies to this day. The original candies were yellow and hand-shaped to look like little chicks, hence the name “Peeps”.

40 Hit HBO show whose main character worked at the nonprofit We Got Y’all : INSECURE

“Insecure” is a comedy-drama TV show that premiered in 2016. It is co-written by and stars Issa Rae, who also created the comedy web series “Awkward Black Girl” on which “Insecure” is based.