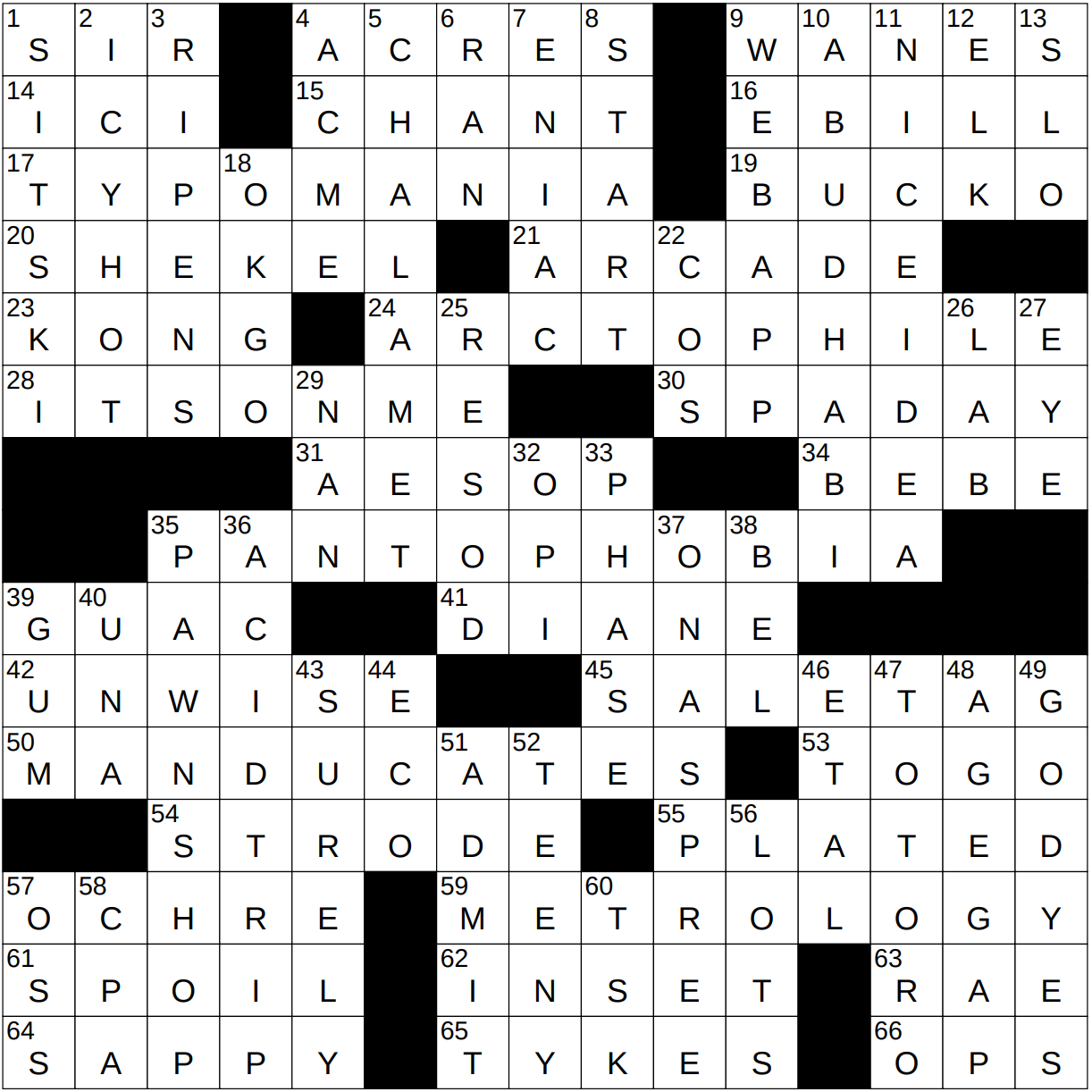 Constructed by: John Hawksley
Edited by: Will Shortz

Today’s Theme (according to Bill): NOT, a Great Puzzle 🙂

Themed answers are relatively obscure terms, but reinterpreted with meanings that would seem to make sense:

1 Title for Geraint or Gawain : SIR

“A Thousand Acres” is a Pulitzer Prize-winning novel by Jane Smiley. The novel is a retelling of William Shakespeare’s “King Lear”. Just as in “King Lear”, the plot features a father with three rival daughters.

Saint-Tropez is a town in southeastern France on the French Riviera. These days, Saint-Tropez is very much associated with the European and American jet set. The town is named for a legendary martyr named Saint Torpes of Pisa. Torpes was supposedly executed on the orders of the Roman Emperor Nero. Having been beheaded, his head was tossed into the river Arno, and his body placed in a boat along with a cock and a dog who were to eat the body. The boat came ashore at the present-day location of Saint-Tropez, with the body untouched by the cock and the dog. The local people named their village in honor of Saint Torpes.

19 Term of address for a young man : BUCKO

“Bucko” was originally a nautical term of address. It dates back at least to 1883 when it referred to a cocky, swaggering sort of guy.

The shekel is the currency used today in Israel. The first use of the word “shekel” was in Mesopotamia around 3000 BCE when it probably referred to a specific weight of barley. Each shekel is worth 100 agorot (singular “agora”).

21 Venue with a token-based currency : ARCADE

The first video game featuring the ape named Donkey Kong was created in 1981. That same game introduced the world to the character known as Mario, four years before the game Super Mario Bros became such a big hit.

24 Lover of teddy bears … NOT a devotee of polar regions : ARCTOPHILE

The stuffed toy known as a teddy bear was introduced in the early 1900s and was named for President Theodore “Teddy” Roosevelt. The toy was inspired by a political cartoon that was drawn in 1902 showing President Roosevelt on a bear hunt and refusing to kill a black bear cub.

“The Boy Who Cried Wolf” is one of Aesop’s fables, and the tale that gives rise to our phrase “to cry wolf” meaning “to give a false alarm”. In the fable, a shepherd boy is in the habit of tricking nearby villagers into thinking a wolf is attacking his flock by crying “Wolf!”. When an actual attack is made, the villages assume it’s another false alarm and the sheep are eaten by the wolf.

Diane Rehm is host of the NPR-syndicated radio show called “The Diane Rehm Show”. The show used to be called “Kaleidoscope”, when Rehm took over as host in 1979. It was rebranded in 1984.

If you go looking for a laundromat in the UK or Ireland, folks will likely know what you’re talking about. However, the local name for such a facility is “launderette” or sometimes “laundrette”.

Dubai is one of the seven emirates that make up the federation known as the United Arab Emirates (UAE). The two largest members of the UAE (geographically) are Dubai and Abu Dhabi, the only two of the seven members that have veto power over UAE policy.

OK Go is a rock band that formed in Chicago before relocating to Los Angeles. Apparently, OK Go is known for producing some zany music videos.

32 Nail polish brand with the shade “I’m Not Really a Waitress” : OPI

36 What might change your mind, in a way : ACID TRIP

Our word “spree”, meaning “carefree outing”, might be an alteration of the French “esprit”, a term meaning “spirit, lively wit”.

Selena Gomez is an actress and singer from Grand Prairie, Texas. Gomez’s first television role was in the children’s show “Barney & Friends”. She then played the lead in the TV series “Wizards of Waverly Place”. Gomez’s fans often refer to themselves as “Selenators”. Offscreen, Gomez made a splash as the girlfriend of Canadian singer Justin Bieber for a couple of years.

Our use of the word “lot” to describe a parcel of land dates back to the 1630s when ownership of the best property in new settlements was decided by castings “lots”.