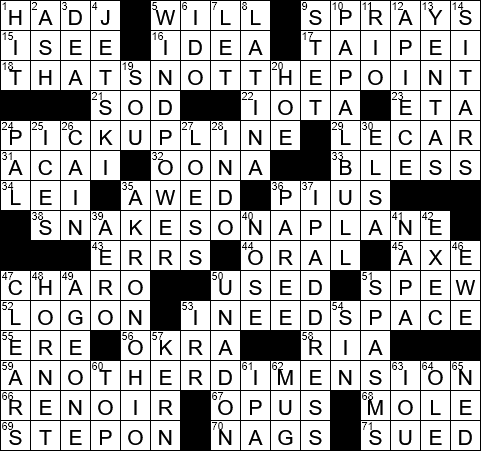 We add ANOTHER DIMENSION as we progress through the entities that finish off each of today’s themed answers:

1. One of the Five Pillars of Islam : HADJ

“Taipei” translates from Chinese as “Northern Taiwan City” and indeed is situated at the northern tip of Taiwan. The city is nicknamed “City of Azaleas” as flowers are said to bloom better in Taipei than in any other city on the island.

French automaker Renault made the “mini-like” Renault 5 and sold it as the Renault “Le Car” in North America. My Dad had a Renault 5 in Ireland, back in the day …

There have been twelve popes named Pius, the latest being Pope Pius XII who led the Roman Catholic Church until his death in 1958.

55. Conjunction in the middle of a famous palindrome : ERE

59. What a sci-fi portal might lead to … or what’s added successively to the ends of the answers to the starred clues : ANOTHER DIMENSION

“The Bathers” is a 1918/1919 oil painting by Pierre-Auguste Renoir that is housed in the Musée d’Orsay in Paris. One of the models Renoir used for the work was actress Catherine Hessling. A few years after posing, Hessling married Pierre-Auguste’s son Jean Renoir, who was to become one of France’s most famous film directors.

A “bulla” (also “bull”) is a type of seal impression. A Papal Bull is a formal document from the Vatican that has such a seal attached, hence the name of the document.

In the strict sense of the term, Indochina is a region in Southeast Asia that corresponds to the former French territory known as French Indochina. Today this region is made up of the countries of Cambodia, Laos and Vietnam. However, the term “Indochina” is more generally used to describe Mainland Southeast Asia, and in this usage it also encompasses Myanmar, Singapore and Thailand.

“Frozen” is a 2013 animated feature from Walt Disney Studios that is based on the Hans Christian Andersen fairy tale “The Snow Queen”. The film is all about the exploits of Princess Anna, the younger sister of Elsa, Snow Queen of Arendelle.

For much of the 1800s, the Ohio city of Akron was the fasting growing city in the country, feeding off the industrial boom of that era. The city was founded in 1825 and its location, along the Ohio and Erie canal connecting Lake Erie with the Ohio River, helped to fuel Akron’s growth. Akron sits at the highest point of the canal and the name “Akron” comes from the Greek word meaning “summit”. Indeed, Akron is the county seat of Summit County. The city earned the moniker “Rubber Capital of the World” for most of the 20th century, as it was home to four major tire companies: Goodrich, Goodyear, Firestone and General Tire.

“Who Said Gay Paree?” is a song from the Cole Porter musical “Can-Can”.

40. Missing part of the Sphinx : NOSE