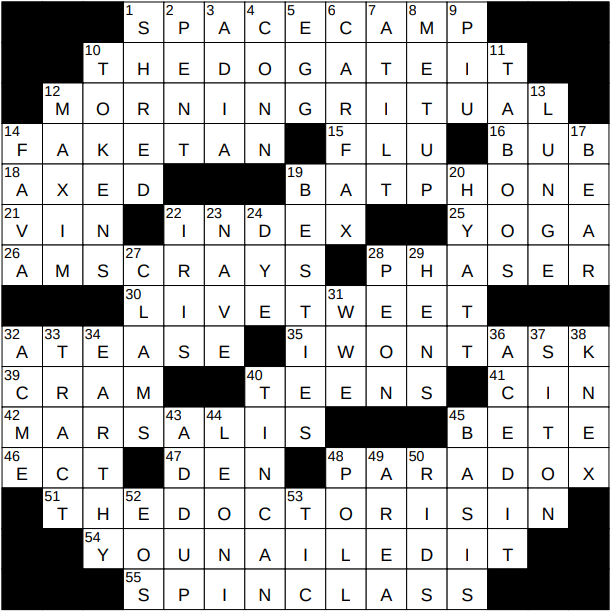 The US Space Camp was founded in 1982 largely at the suggestion of Wernher von Braun. The original Space Camp was opened in Huntsville, Alabama and it still operates today. There followed Space Camp Florida and Space Camp California, but they’ve since closed their doors.

Huntsville is a city in northern Alabama that was founded in 1805 as a settlement with the name “Twickenham”. One of the early landowners was LeRoy Pope, and he opted for “Twickenham” as that was the name of the town in England where Alexander Pope lived, as Alexander was a distant relative. The settlement was renamed within a few years in honor of John Hunt, another early settler and veteran of the Revolutionary War.

14 Bronze from a bottle : FAKE TAN

41 The Bengals, on scoreboards : CIN

The NFL’s Cincinnati Bengals team was founded in 1966 as a member of the American Football League (AFL). There was an earlier team called the Bengals in the city that played from 1937 to 1941. That team used the “Bengal” name because Cincinnati Zoo was home to a very rare Bengal tiger.

Wynton Marsalis is a trumpeter and composer. He holds the position of Artistic Director of Jazz at Lincoln Center in New York City. In 1997, Marsalis became the first jazz musician to win the Pulitzer Prize for Music.

Sarah McLachlan is a singer/songwriter from Halifax, Nova Scotia who lives in Vancouver. In 1997, McLachlan married Ashwin Sood, the drummer in her band. The 1998 hit song “Adia”, which she co-wrote and recorded, was intended as an apology to her best friend … for stealing her ex-boyfriend and then marrying him!

The official nickname of Connecticut (CT) is the “Constitution State”, but can also be referred to as the Nutmeg State, the Provisions State, and the Land of Steady Habits.

The geographical region of New England comprises the six northeastern states Connecticut, Maine, Massachusetts, New Hampshire, Rhode Island, and Vermont. The name “New England” was given to the region by English explorer John Smith in 1616, just a few years before the Mayflower arrived in 1620.

Carfax is a company that supplies the history of a used vehicle to a potential buyer. The information mainly comes from motor vehicle departments, and is available to anyone. Carfax just adds a layer of convenience by producing a summary report on demand.

“Più” is the Italian word for “more” and is often seen on musical scores, as in “più allegro” (more quickly) and “più mosso” (with more movement).

Our word “maxim” meaning “precept, principle” has been around since the early 1600s. It ultimately comes from the Latin phrase “maxima propositio”, which translates as “greatest premise”.

The quadriceps femoris is the muscle group at the front of the thigh. It is the strongest muscle in the human body, and is also the leanest. The “quads” are actually a group of four muscles in the upper leg, hence the use of the prefix “quad-”.

14 Kind of bean that can be used to make falafel : FAVA

The Hyatt hotel chain takes its name from the first hotel in the group, i.e. Hyatt House at the Los Angeles International Airport that was purchased in 1957. Among other things, Hyatt is famous for designing the world’s first atrium hotel, the Hyatt Regency in Atlanta.

22 Messenger for the gods in the “Iliad” : IRIS

31 Former employer of Dwayne (The Rock) Johnson, for short : WWE

A tract is a political pamphlet, originally a discussion document. The name “tract” comes from the Latin verb “tractare” meaning “to discuss”.

Humus is the dark organic material found in soil. It is the result of the decomposition of vegetable and animal matter, and supplies vital nutrients to the earth. “Humus” is Latin for “earth, soil”.

The construction toy with the name K’Nex is the phonetic spelling of the word “connects”. The toy was invented by Joel Glickman, who came up with the idea while playing with straws as he sat at a table after a wedding. He launched K’Nex in 1993, and it is still sold in stores.

eos Products is a company that was founded in 2006 in New York City. eoS sells beauty products such as lotions and creams, and is most famous for its lip balm. The initials “eos” stand for “Evolution of Smooth”.

The prefix “idio-” indicates something peculiar, as in “idiosyncrasy”, a peculiarity exhibited by an individual or a group.