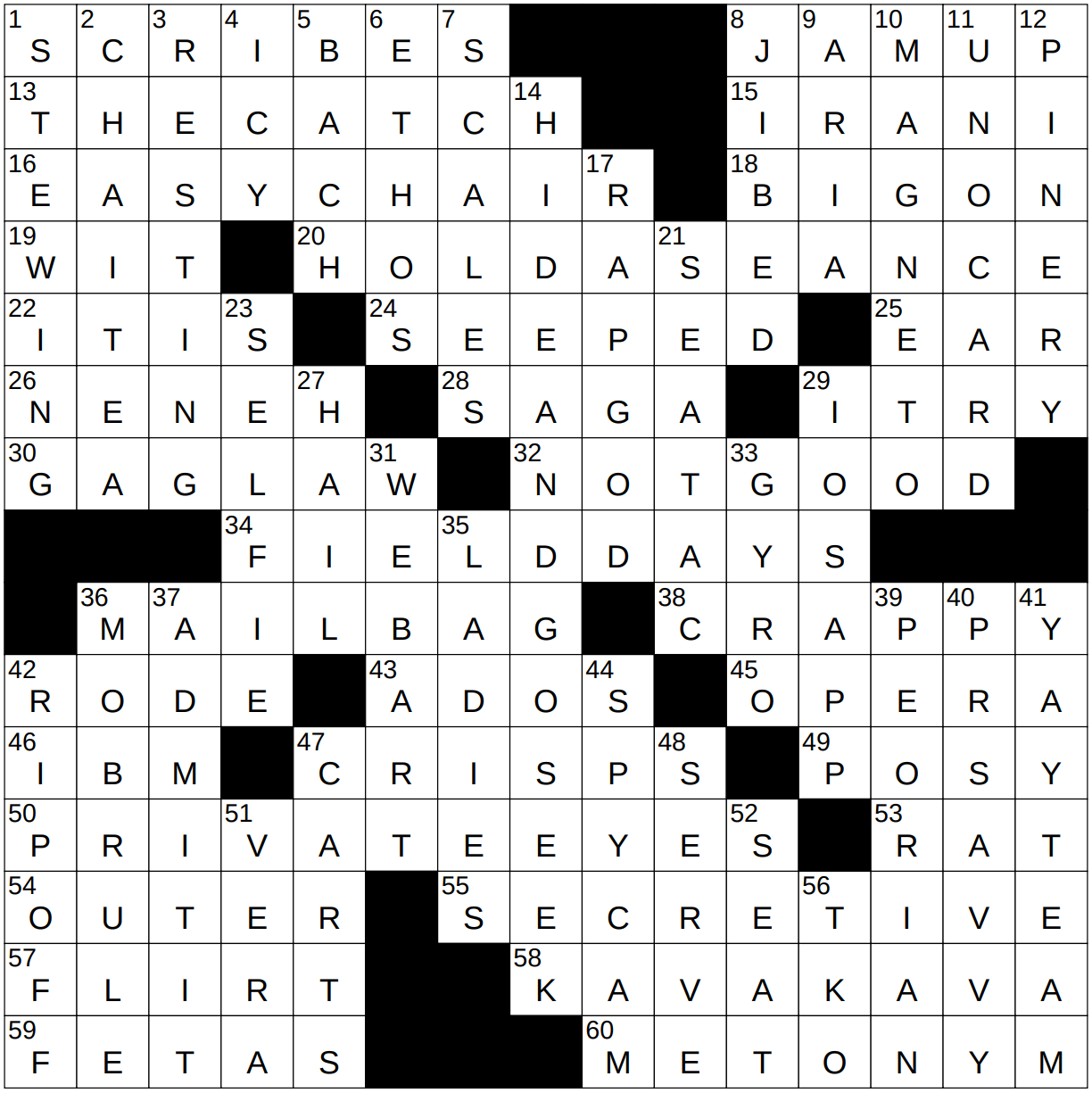 15 Many a Zoroastrian : IRANI

Zoroastrianism is a religion founded by the prophet Zoroaster around 600 BCE, making it one of the oldest religions in the world. There are two main Zoroastrian communities today, both of whom migrated to the Indian subcontinent from Greater Iran. The Parsis migrated in the 8th to 10th centuries, and the Irani migrated in the 19th century.

“Séance” is a French word meaning “sitting”. We use the term in English for a sitting in which a spiritualist tries to communicate with the spirits of the dead.

22 Phrase that’s often contracted … or suffix for something contracted : IT IS or -ITIS

Neneh Cherry is a rap singer from Stockholm, Sweden. Cherry was born Neneh Karlsson, but she took the name of her stepfather, American jazz trumpeter Don Cherry.

Deep Blue was a computer developed by IBM specifically for playing chess. In 1996 it became the first machine to win a chess game against a reigning world champion. The champion in question was the great Garry Kasparov, although he came out on top in the end by winning the 6-game competition 4-2.

49 One in a nursery rhyme pocketful : POSY

“Ring a Ring o’ Roses” is a nursery rhyme that I well remember from my childhood.

Ring-a-ring o’ roses,
A pocket full of posies,
A-tishoo! A-tishoo!
We all fall down.

The lyrics tend to be a little different over here in North America:

Ring-a-round the rosie,
A pocket full of posies,
Ashes! Ashes!
We all fall down.

There’s an urban legend that the rhyme refers to the Great Plague that struck England in 1665. The inference is that “ring o’roses” is a rosy rash, and that “posies” of herbs were carried to ward off the disease. Victims would sneeze “a-tishoo” and “all fall down” dead.

50 Figures in “Knives Out” and “The Maltese Falcon” : PRIVATE EYES

A private eye is a private investigator, a PI, a private “I”.

The White House was designed by an Irishman. James Hoban from County Kilkenny emigrated to the US in his twenties, and won the design competition for the White House in 1792.

5 “The beginning and end of all music,” per Max Reger : BACH

Like so many of the great composers, the extent of Bach’s contribution to the repertoire wasn’t fully recognized until long after his passing. I personally rate Johann Sebastian Bach as the greatest composer of the Baroque period. He is ranked by many as the greatest classical composer of all time.

Max Reger was a German composer and conductor. One of his students was George Szell, the famous Hungarian-born American composer who worked with the Cleveland Orchestra for so many years.

In the Marvel Comics universe, Magneto is a powerful mutant, and an enemy of the X-Men. As his name implies, Magneto’s superhuman ability is that he can generate and control magnetic fields. Magneto has been portrayed on the big screen in the “X-Men” series of films by Sir Ian McKellen, and by Michael Fassbender.

UNO is a card game that was developed in the early seventies and that has been sold by Mattel since 1992. It falls into the shedding family of card games, meaning that the goal is to get rid of all your cards while preventing opponents from doing the same.

James Dole lent his name to today’s Dole Food Company. He was known as the Pineapple King, as he developed the pineapple industry in Hawaii and founded the Hawaiian Pineapple Company, the forerunner to the Dole Food Company. Dole might have had some help on the way, as he was a cousin of Sanford B, Dole, President of the Republic of Hawaii from 1894 to 1900.

17 Eminem track with the Guinness World Record for “most words in a hit single” : RAP GOD

23 Shot only you can take : SELFIE

A selfie is a self-portrait, one usually taken with a digital camera or cell phone. A “group selfie” is sometimes referred to as a “groufie” or “wefie”. A “couple selfie” is known as an “usie” or “ussie”, although those terms are sometimes also used for a group picture.

Tzatziki is a sauce made from cucumbers mixed into yogurt with other flavorings. It is a sauce primarily associated with Greece, although variants are found in cuisines of other parts of Southeastern Europe and the Middle East.

44 Gadget that might be disguised as something else : SPY CAM