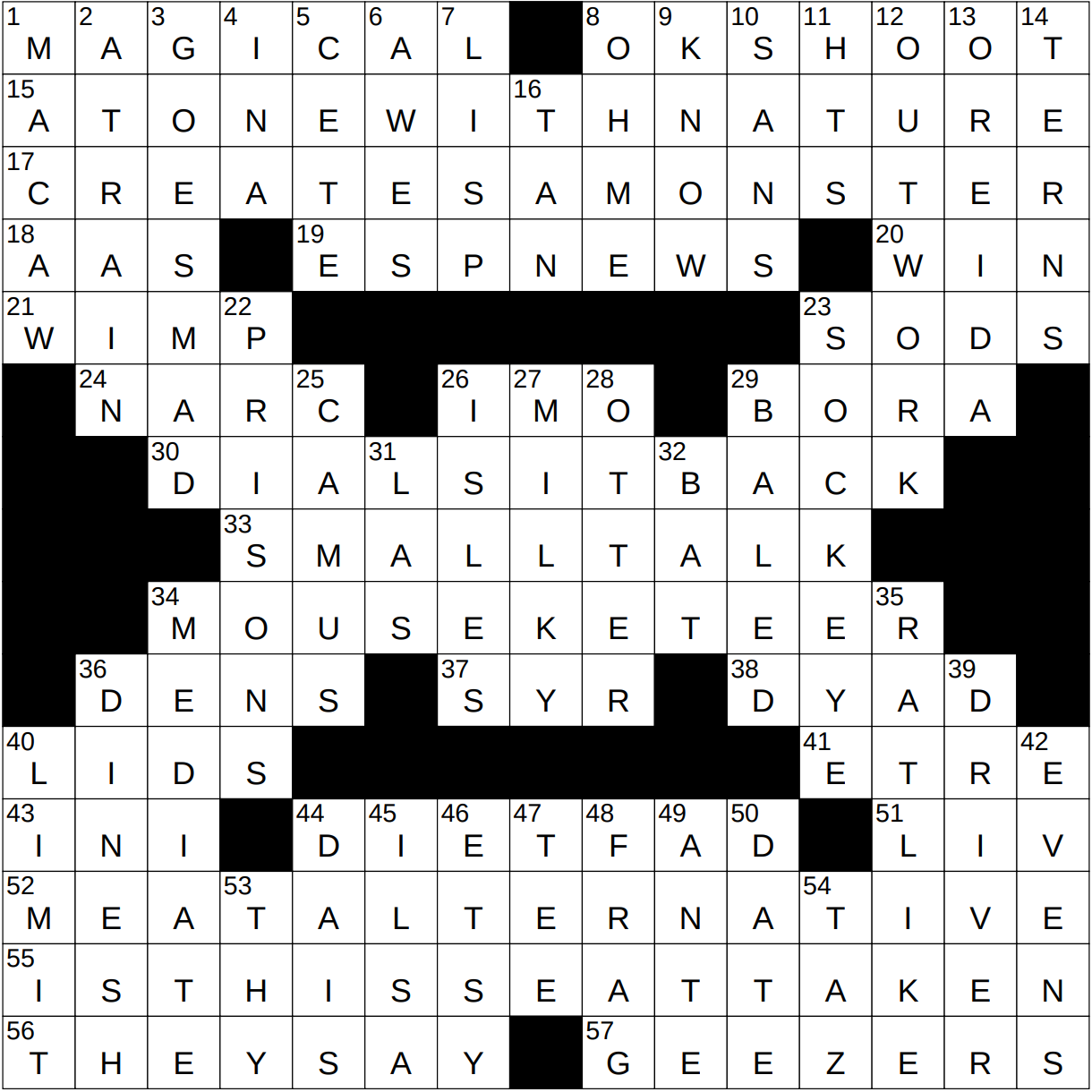 Constructed by: Benji Goldsmith
Edited by: Will Shortz

19 Venue with highlights and replays : ESPNEWS

ESPNews is a 24-hour sports news channel that started broadcasting in 1996.

29 Half of a Polynesian locale : BORA

Bora Bora is one of the Society Islands of French Polynesia. The name “Bora Bora” is imitative of the Tahitian name for the island and should really be pronounced “pora pora”. “Bora bora” translates as “first born”.

The Mickey Mouse Club was created by Walt Disney in 1955, and it’s still going strong today. Over the years the show has given some famous names their start in “the business” as “mouseketeers”, especially in recent times. Included in the list are Britney Spears, Christina Aguilera and Justin Timberlake.

Britney Spears was the best-selling female artist in the first decade of the 21st century. In recent years, Spears has attracted public attention for more than just her performances as a musician. Against her will, she was placed under the conservatorship of her father and an attorney in 2008, due to concerns about her mental wellbeing. Originally meant to last days, the conservatorship was extended to months, and was then made permanent. A social movement to “free” Britney from the conservatorship took off in 2019, and a court granted a termination of the arrangement in 2021.

The Syrian national flag is a red, white and black tricolor with two green stars in the middle. The design was adopted in 1958 when Syria joined the United Arab Republic, along with Egypt. The two green stars represent Syria and Egypt, the two members of that short-lived political union.

Back in the 1930s, Earl Tupper was working at the DuPont Chemical Company, and from DuPont obtained inflexible pieces of polyethylene slag. Tupper purified the slag and shaped it into unbreakable containers. He added airtight lids with a “burping seal” that provided tight seals similar to that provided by the lids on paint cans. He called his new product Tupperware.

“Tofu” is a name for bean curd, and is a Japanese word meaning just that … bean that has curdled. Tofu is produced by coagulating soy milk, using either salt or something acidic. Once the protein has coagulated, the curds are pressed into the familiar blocks. Personally I love tofu, but my wife absolutely hates it …

2 Transportation in a Duke Ellington classic : A TRAIN

“Sans” is the French word for “without”, and is a word that we’ve absorbed into English with the same meaning.

14 Birds that rarely swim, despite having webbed feet : TERNS

22 The Bastille and the Tower of London, historically : PRISONS

The Bastille is a former fortress in Paris that was used as a prison by the kings of France. On 14 July 1789, an angry mob stormed the Bastille during the French Revolution. The mob was actually after the stores of gunpowder in the fortress, but while inside the building freed seven prisoners and killed the Bastille’s governor. The storming of the Bastille became a symbol of the French Revolution and has been celebrated in France every July 14th since 1790. That celebration is referred to as “la fête nationale” (the national day) in France, but in English-speaking countries it is usually known as “Bastille Day”.

The spectacular Tower of London sits right on the north bank of the River Thames in the center of London. The castle dates back to the years just following the Norman Conquest of England in 1066. The victorious William the Conqueror built the Tower’s central keep (called the White Tower) in 1078. The Tower of London has been used for many purposes over the centuries, as a residence, a prison, and was even home to the Royal Mint. Famously it houses the Crown Jewels of the United Kingdom, and has done so since 1303.

The sockeye salmon is also known as the red or blueback salmon. The name “sockeye” comes from “suk-kegh”, a word from the native language of an indigenous people in British Columbia. “Suk-kegh” means “red fish”.

25 Albert with a Nobel Prize : CAMUS

The “British Isles” comprise over six thousand islands off the northwest coast of Europe, the two largest being the islands of Great Britain and Ireland. Back in my homeland of Ireland, we’re not too fond of the term “British Isles”, as it tends to awaken memories of the Norman invasion and the Tudor conquest. We tend to go instead with the term “Britain and Ireland”.

The music for the Christmas song “Deck the Halls” is a traditional Welsh tune that dates back to the 16th century. The same tune was used by Mozart for a violin and piano duet. The lyrics with which we are familiar (other than the “fa-la-la”) are American in origin, and were recorded in the 19th century.

47 It provides more coverage than a tank : TEE