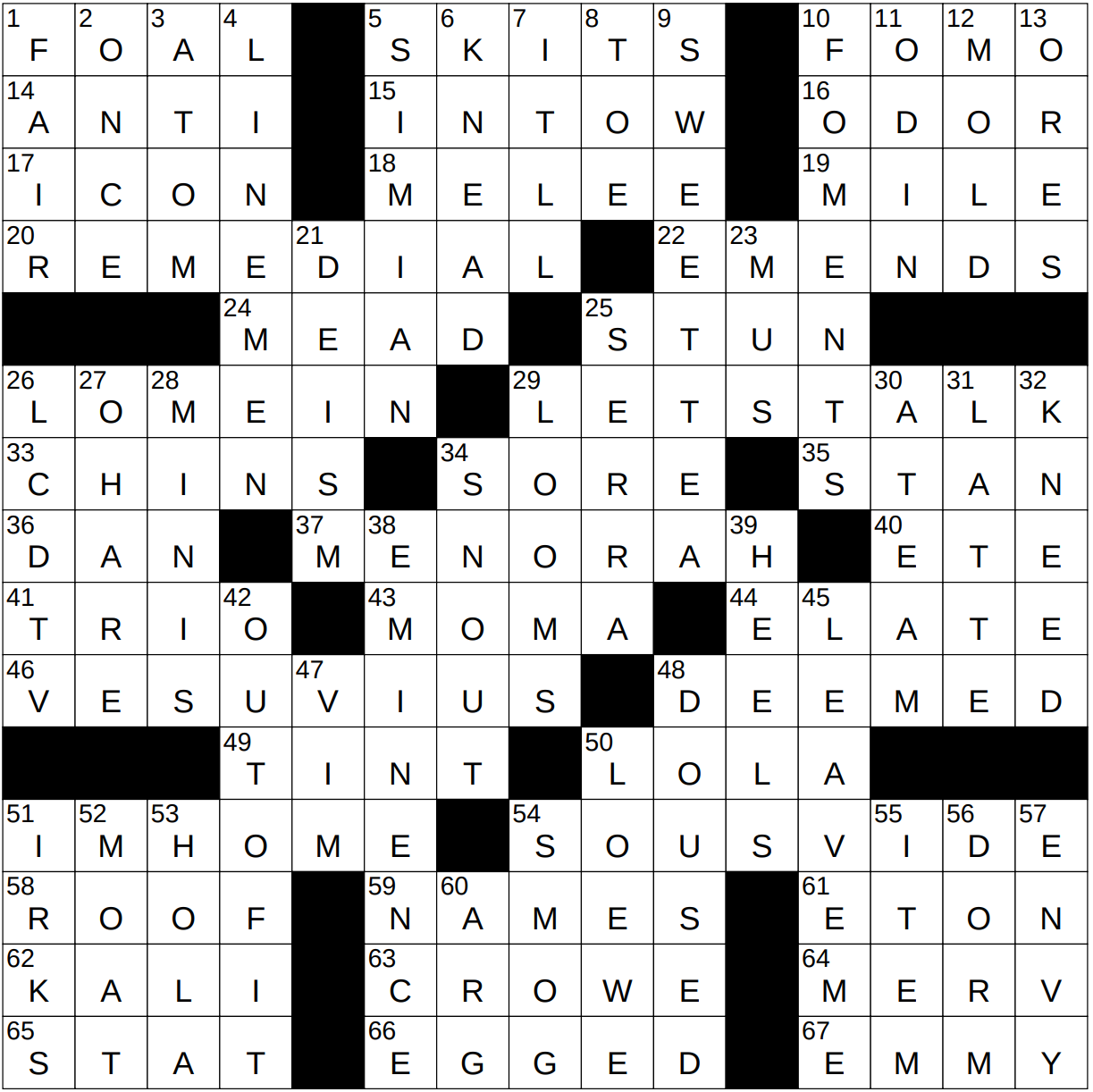 Constructed by: Hoang-Kim Vu and Jessica Zetzman
Edited by: Will Shortz

Today’s Reveal Answer(s): Leave Me … Out of It

Each themed answer only make sense when we LEAVE “ME” OUT OF IT:

10 Anxiety about not being included, in modern lingo : FOMO

Antitrust laws are those that protect market competition and regulate against anti-competitive activities by individuals and companies.

The first patent for a rotary dial mechanism for a phone was granted in 1898, and the familiar rotary dial phones (with holes for the finger) were introduced by the Bell System in 1919. This form of dialing was called “pulse dialing”. When you dialed the number 5, say, the dial would rotate back to the start position, opening and closing electrical contacts five times and sending five pulses over the telephone line. I used to love rotary dial phones when I was a kid. My grandfather was a telephone engineer and he showed me how to “tap out” the pulses on the “hook” at the top of a pay phone. I was able to make free calls that way. He definitely contributed to the delinquency of a minor …

The beguiling Norah Jones is the daughter of famed sitar virtuoso Ravi Shankar, and is one of my favorite singers. If you haven’t heard Jones singing her song “Come Away with Me”, you just haven’t lived …

50 Actress Kirke of “Mozart in the Jungle” : LOLA

Lola Kirke is an actress and singer-songwriter who is perhaps best known for playing the lead in the TV show “Mozart in the Jungle”. Although raised in New York City, she was actually born in London.

“Sous-vide” is a cooking method in which the food is sealed in plastic bags and very slowly steamed in a water bath. The term “sous-vide” is French for “under vacuum”.

King Henry VI of England succeeded to the throne when he was just nine months old, making him the youngest monarch ever to sit on the English throne.

67 Award that sounds like two letters of the alphabet : EMMY

The textile known as linen is made from flax fibers. The name “linen” probably comes from “linum”, which is Latin for both “flax” and “textile made from flax”.

8 Lowest part of a glacier : TOE

A glacier is a body of ice that persists throughout the seasons, and which moves under its own weight. The term “glacier” ultimately derives from the Latin “glacies” meaning “ice”.

A font is a set of characters used in printing that have the same style. In the days of metal type, all the letters of a given style were cast at same time, i.e. the metal was melted and poured into a single mold. The word “font” comes into English from the Middle French “fonte” meaning “casting”.

Magnetite is a form of iron oxide ore, a valuable source of iron. It is the most magnetic of all known minerals, hence the name. Pieces of magnetite called lodestone were used in ancient times to study the property of magnetism.

Malachite is a mineral composed of copper carbonate hydroxide. Samples of the mineral contain opaque green bands. The name “malachite” ultimately derives from the Greek “molochitis lithos” meaning “mallow-green stone”. This is a reference to green leaves of the mallow plant, also known as “malva”. Paradoxically, it is the French name of the malva plant that gives our word “mauve”, referring to the color of the flowers.

23 There are two in the Greek “Mnemosyne” : MUS

The Greek letter mu is the forerunner to our Roman letter M.

The iPad mini is a line of smaller iPads that was introduced by Apple in 2012. The iPad mini has a screen size of 7.9 inches, whereas the regular iPad’s screen is 9.7 inches.

31 Serving that might have a “solid heart” or “simple tulip” design : LATTE

A proboscis is a long appendage attached to the head of an animal, and is sometimes referred to as an elongated “nose”. Many an insect has a proboscis, as does an elephant.

Granada is a city and province in Andalusia in the south of Spain. Granada should not be confused with Grenada (note the different spelling), an island nation in the Caribbean that was invaded by the US in 1983.

57 Member of a noted septet : ENVY

Argentina is the second largest country in South America (after Brazil), and the world’s largest Spanish-speaking nation. The name “Argentina” comes from the Latin “argentum”, the word for “silver”. It is thought that the name was given by the early Spanish and Portuguese conquerors who also named the Rio de la Plata (the “Silver River”). Those early explorers got hold of lots of silver objects that they found among the native population.