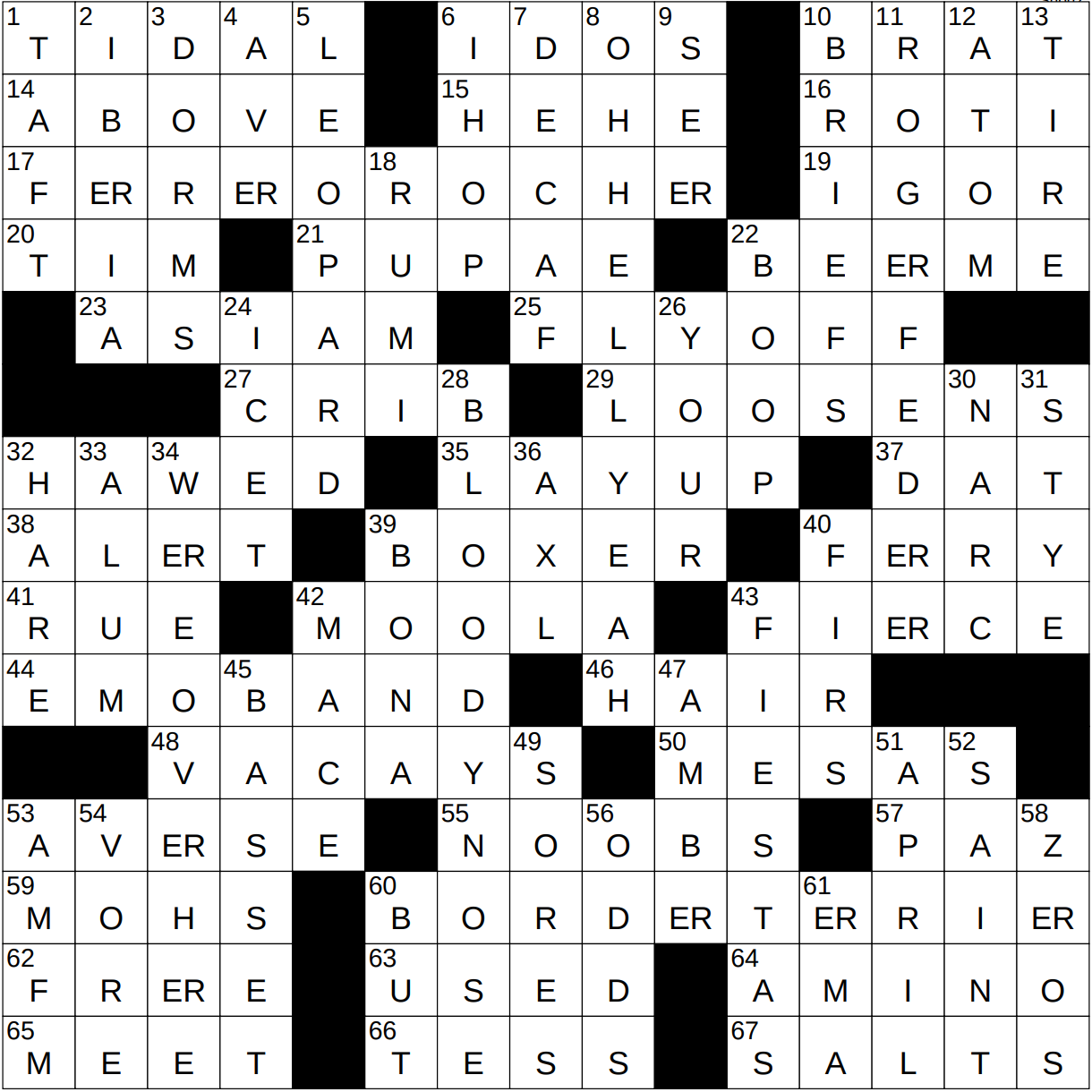 Constructed by: Ethan Zou & Tomas Spiers
Edited by: Will Shortz

We have a rebus puzzle today, with “ER” occupying several BOXES in the grid:

The Italian manufacturer of chocolate known as Ferrero is one of the largest producers of chocolate products in the world. The company was founded in 1946 in Piedmont, Italy by Pietro Ferrero. Some of Ferrero’s famous products are the chocolate and hazelnut spread called Nutella. Ferrero Rocher chocolates (delicious!) and Tic Tacs breath mints.

“Dat Dere” is a jazz song by Bobby Timmons and Oscar Brown, Jr. that was first recorded in 1960, by Art Blakey and the Jazz Messengers. The song tells the story of a young boy visiting a zoo with his father.

“Noob” (sometimes “newb”) is a not-so-nice, slang term for a “newbie”, and often refers to someone who is new to an online community.

The administrative capital of Bolivia, La Paz, is officially named Nuestra Senora de La Paz (Our Lady of Peace). La Paz is the seat of the Bolivian government, even though the constitutional capital of the country is Sucre.

59 Friedrich who created a scale of hardness : MOHS

Border terriers take their name from the Scottish borders, where they were bred to hunt small game and to kill rodents.

Tess Gerritsen is a novelist and retired physician. Her most famous novels are the “Rizzoli & Isles” series, featuring homicide detective Jane Rizzoli and medical examiner Maura Isles. The Isles character also appears in the stand-alone crime thriller “The Bone Garden”, first published in 2007.

1 Only U.S. president also to serve as chief justice : TAFT

The airline called Iberia is the flag carrier for Spain and is based in the country’s capital city at Madrid-Barajas Airport.

5 Its spots are actually rosettes : LEOPARD

The spots on spotted animals such as leopards and jaguars are arranged in groups. Those grouped spots are termed “rosettes”. The spotted patterns on such animals are unique to each individual.

6 Restaurant chain with a smile in its logo : IHOP

7 Unleaded, so to speak : DECAF

40 Much of Finland’s wilderness : FIRS

43 Parties that become naps when their first letter is changed to an “s” : FIESTAS

51 When many hibernations end : APRIL

When animals hibernate, they are minimally active, have low body temperatures, relatively slow breathing and a low metabolic rate overall. HIbernation can last days and even months, and is most closely associated with the winter season. The term “hibernation” comes from the Latin “hibernare” meaning “to pass the winter, occupy winter quarters”.