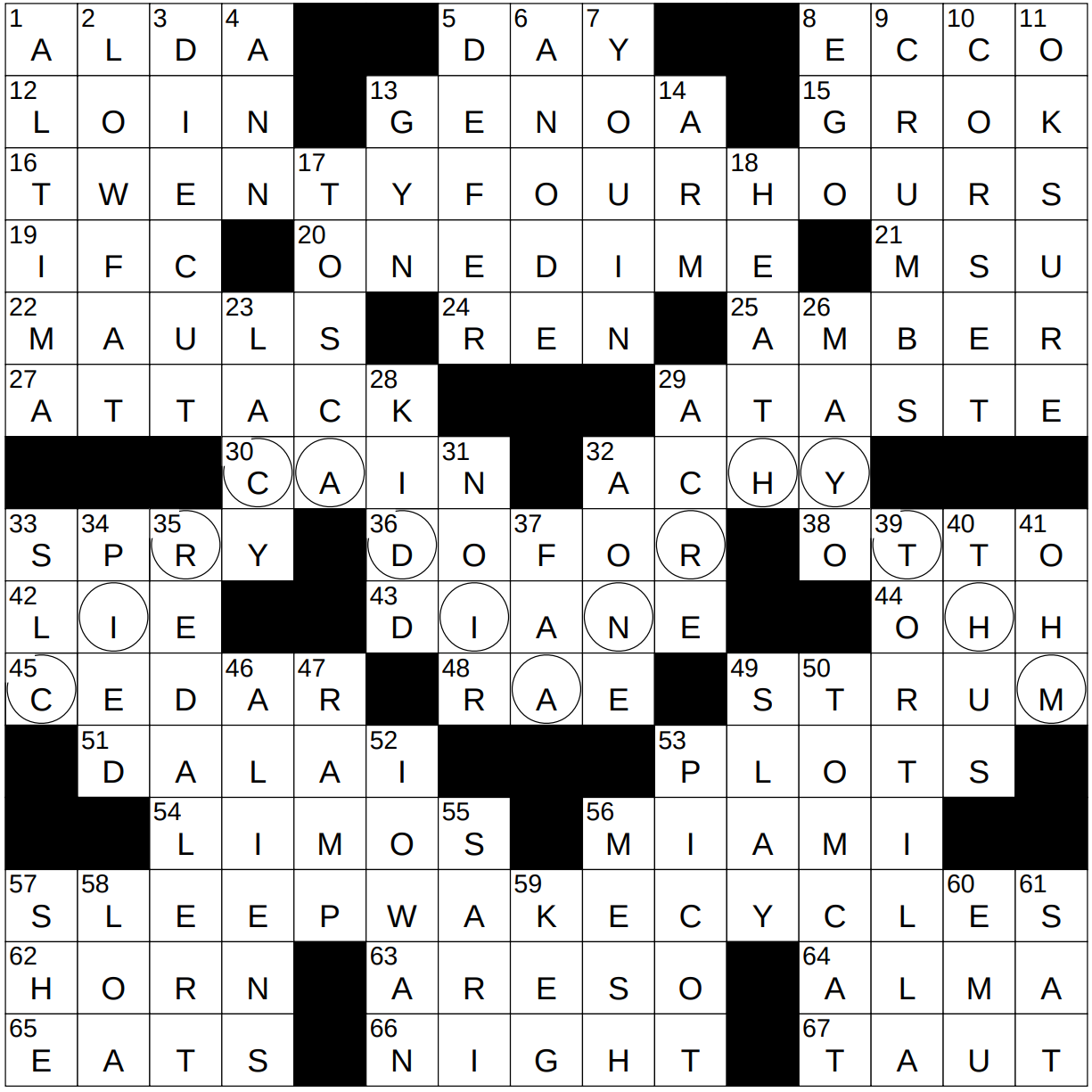 Circled letters across the middle of the grid are arranged in a sinusoidal waveform, and spell out the phrase CIRCADIAN RHYTHM:

Loin is the tissue along the top of the ribs.

Genoa salami is made using preservation techniques that originated in ancient Rome.

19 Movie co. with a presence at Sundance : IFC

IFC Productions is a film production company, and part of IFC the Independent Film Channel (one of my favorites cable channels).

The Sundance Film Festival is the largest independent film event in the country, and takes place every year around the Sundance Resort near Provo, Utah. The festival has its roots in the Utah/US Film Festival which started in Salt Lake City in 1978. Management of the festival was taken over by Robert Redford’s Sundance Institute in 1985. The festival has become a bit of a media feeding frenzy in recent years, as a lot of A-list celebrities attend. The Festival organizers introduced a “Focus on Film” campaign in 2007 in an attempt to offset some of the madness.

20 Words on the smallest current U.S. coin : ONE DIME

Diane von Fürstenberg (DVF) is a fashion designer from Brussels, now based in the US. Born Diane Halfin, she was Princess Diane of Fürstenberg from 1969 until 1972 while married to Prince Egon of Fürstenberg.

6 One end of a battery : ANODE

The HEATH bar is a Hershey product that was introduced in the 1930s by brothers Bayard and Everett Heath. The candy was promoted back then with the line “Heath for better health!”, a reference to the “healthy” ingredients of the best milk chocolate and almonds, creamery butter and pure sugar cane. Different times …

Mayonnaise originated in the town of Mahon in Menorca, a Mediterranean island belonging to Spain. The Spanish called the sauce “salsa mahonesa” after the town, and this morphed into the French word “mayonnaise” that we use in English today.

Jason Kidd is a former point guard in the NBA. He finished his career with the New York Knicks, and then took coaching positions with the Brooklyn Nets, Mulwaukee Bucks and LA Lakers.

31 Counterpart of rouge, in roulette : NOIR

In the game of roulette, players can bet on “rouge” (red) and “noir” (black).

Something described as pied is patchy or blotchy in color, piebald. The term comes from the Middle English “pie”, an old name for the magpie, and is a reference to the bird’s black and white plumage.

46 Many characters in “Guardians of the Galaxy” : ALIENS

“Guardians of the Galaxy” is a 2014 film based on a team of superheroes from the Marvel Comics universe. The movie’s cast is very impressive, including Chris Pratt, Bradley Cooper, Glenn Close and Benicio del Toro. I don’t normally “do” superhero films, but I hear that this one is very entertaining.

55 Garment worn with a choli : SARI

The Mauna Loa Observatory (MLO) on the Big Island of Hawaii primarily monitors and collects data about changes in the Earth’s atmosphere. The MLO has been continuously monitoring CO2 levels in the atmosphere longer than any other facility on the planet, with records going back to 1958.

60 Bird related to the cassowary : EMU

The cassowary is a large, flightless bird found mainly in New Guinea. One species of cassowary is the third tallest bird on the planet, second only to the ostrich and the emu.