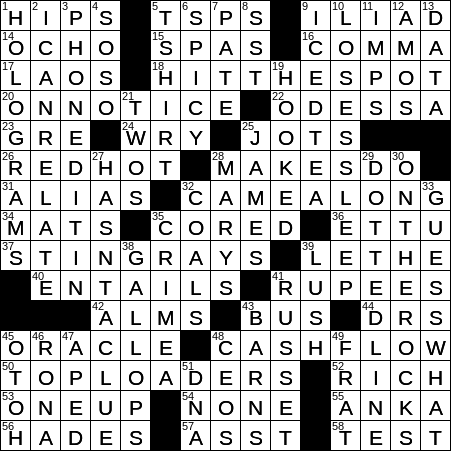 1 Where hands go in the Time Warp dance : HIPS

14 Number of sides on a PARE road sign : OCHO

41 They can get you into the Taj Mahal : RUPEES

54 Last word in the first verse of “Old Mother Hubbard” : … NONE

“Put Your Head on My Shoulder” is a song written and recorded by Paul Anka in 1959. The song was famously covered by the Lettermen in 1968.

A person who does a job while expending minimal effort is said to “phone it in”.

John Daly is a golfer with the nickname “Long John”, as he really knows how to get distance off the tee. He has the reputation of a wild man on the circuit, and perhaps that’s why he has a drink named after him. A “John Daly” is the same as the non-alcoholic “Arnold Palmer”, made with lemonade and iced tea, but the “Daly” has vodka added.

I’m a big fan of binge-watching, the practice of watching perhaps two or three (even four!) episodes of a show in a row. My wife and I will often deliberately avoid watching a recommended show live, and instead wait until the whole series has been released online. I’m not a big fan of “tune in next week …”

38 Speeds through the Downs, say : GALLOPS

Russet is a color made from an equal mixture of pure orange and pure purple. The term comes from the French adjective “rousset” meaning “reddish”.

46 Woman’s name that becomes another woman’s name if you switch the first and third letters : RONA

“Rona” becomes “Nora” by switching the first and third letters.

DNA was first isolated in 1869 by Swiss physician and biologist Friedrich Miescher. The molecular structure of DNA was identified in 1953, by the American and British team of James Watson and Francis Crick.