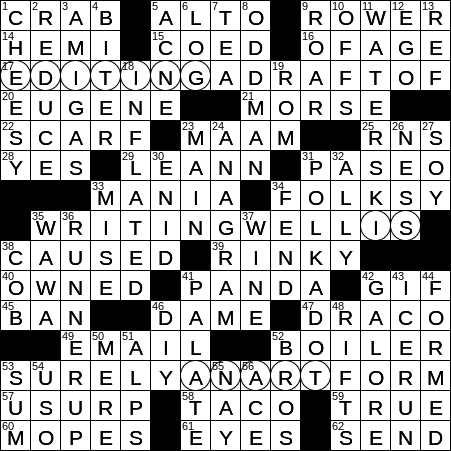 Constructed by: Margaret Saine
Edited by: Will Shortz

Today’s Theme (according to Bill): In Summary …

Themed answers are a musing that is restated in a shorter form as “EDITING IS AN ART”, which is defined by the circled letters in those themed answers:

In Spanish, the summit of a mountain is “alto” (high).

“Hemi” is short for “hemisphere”, and is the name given to an internal combustion engine with hemispherical combustion chambers. Chrysler is famous for using hemi engines in many of its models.

Eugene is the second-largest city in Oregon (after Portland). The city is named for its founder, Eugene Franklin Skinner. Skinner arrived in the area in 1846, after which the settlement he established was called Skinner’s Mudhole. The name was changed to Eugene City in 1852, which was shortened to Eugene in 1889.

The sports teams of the University of Oregon are known as the Oregon Ducks. The big rivals to the Ducks are the Oregon State Beavers, a rivalry that has been dubbed “the Civil War”. The two schools’ football teams play a game every year for the Platypus Trophy.

A paseo is a slow stroll or walk taken outdoors. The term “paseo” comes from the Spanish “pasear” meaning “to take a stroll”.

Actress and singer Julie Andrews was made a dame in 2000 by Queen Elizabeth II. The most famous roles played by Andrews were probably the leads in “Mary Poppins” (1964) and “The Sound of Music” (1965). More recently she has had a recurring role in “The Princess Diaries” (2001) and the film’s 2004 sequel. A favorite Julie Andrews film of mine is a comedy drama set in WWII called “The Americanization of Emily”, which was released in 1964.

Helen Mirren, one of my favorite English actresses, has played three different queens on film and television. She played Queen Elizabeth II on the 2006 film “The Queen”, the title role in the TV drama “Elizabeth I”, and Charlotte of Mecklenburg-Strelitz, the wife of the title character in the 1994 film “The Madness of King George”. Mirren won the “Triple Crown of Acting” for playing:

Draco Malfoy is one of the regular “bad guys” in the “Harry Potter” stories. Malfoy is one of Potter’s fellow students, the one who sneers a lot. Draco’s father is Lucius Malfoy, a character who becomes more and more relevant as the storyline in the series of books progresses.

The so called “waste hierarchy” can be restated as the three Rs: Reduce, Reuse, Recycle. The preferences are in order:

The most common street name in the US is “Second Street”. “First Street” comes in only at number three, and this is because many cities and towns forego the use of “First” and instead go with “Main” or something more historical in nature. The spooky “Elm Street” appears on the list at number fifteen.

24 Illustration for an ill tourist? : ANAGRAM

Yep, “illustration” is an anagram of “ill tourist”.

30 Heroine of Tennyson’s “Idylls of the King” : ENID

31 Like the pattern on Minnie Mouse’s dress : POLKA DOT

Wawa is an East Coast chain of gas stations and convenience stores. Back in the late 1800s, Wawa was the name of a dairy farm operation that delivered milk to homes. When consumers started buying milk in grocery stores in the 1960s, the owners of Wawa shifted their focus and opened up the Wawa Food Market as an outlet for the milk from the dairy operation. Those early food markets developed into the chain of Wawa convenience stores.

Jack Nicklaus is a professional golfer from Columbus, Ohio. Nicknamed “the Golden Bear”, Nicklaus holds the record for winning the most major championships (18). Tiger Woods is in second place, having won 14 to date.

Our word “galore”, meaning “in great numbers”, comes from the Irish phrase “go leór” that translates as “sufficiently, enough”.

43 Rapid breakup of a frozen stream in the spring : ICE RUN

An ice run is the initial breaking up of river ice during the first thaw after winter.