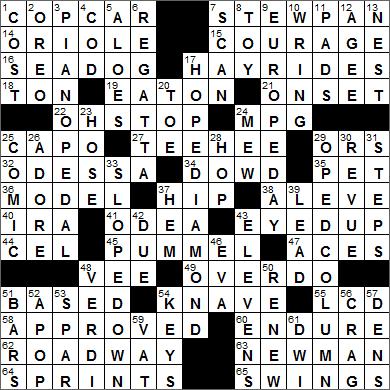 CROSSWORD SETTER: Jacob Stulberg
THEME: Op-Ed Column
Today’s themed answers are in the down-direction, are in COLUMNS. Also, each contains the word OP-ED:

29D. Place for airing an opinion … or what five of this puzzle’s Down answers contain? : OP-ED COLUMN

3D. One of three at the base of a Steinway : PIANO PEDAL
9D. Annual celebration when a 12-star flag may be flown : EUROPE DAY
17D. Large gem in the Smithsonian : HOPE DIAMOND
33D. Decline, as a ramp : SLOPE DOWN

Today’s Wiki-est, Amazonian Googlies
Across
1. Police vehicle : COP CAR
“To cop” was northern British dialect for “to seize, catch”. This verb evolved in the noun “copper”, describing a policeman, someone who catches criminals. “Copper” is often shortened to “cop”.

14. Baltimore ballplayer : ORIOLE
The Baltimore Orioles are one of the eight charter teams of MLB’s American League, so the franchise dates back to 1901. Prior to 1901, the team has roots in the Minor League Milwaukee Brewers, and indeed entered the American League as the Brewers. In 1902 the Brewers moved to St. Louis and became the Browns. The team didn’t fare well in St. Louis, so when it finally relocated to Baltimore in the early fifties the team changed its name completely, to the Baltimore Orioles. The owners so badly wanted a fresh start that they traded 17 old Browns players with the New York Yankees. The trade didn’t help the team’s performance on the field in those early days, but it did help distance the new team from its past.

19. Bond girl Shirley : EATON
The English actress Shirley Eaton was one of the original Bond Girls, and is perhaps one of the most memorable as she appeared as Jill Masterson in “Goldfinger”. It is Masterson who is murdered by covering her body in gold paint.

29. Workplaces for R.N.s : ORS
Registered nurses (RNs) might be found in an operating room (OR) or emergency room (ER).

32. City on the Black Sea : ODESSA
The city of Odessa (also “Odesa”) in Ukraine was founded relatively recently, in 1794 by Catherine the Great. The city was originally meant to be called Odessos after an ancient Greek city believed to have been located nearby. Catherine liked the way the locals pronounced the name as “Odessa” and so went with the less Greek-sounding name.

34. Pulitzer-winning writer Maureen : DOWD
Maureen Dowd is a celebrated columnist for “The New York Times” as well as a best-selling author. Dowd won a Pulitzer for her columns about the Monica Lewinski scandal.

36. Professional on a catwalk : MODEL
In the world of fashion, the runway or catwalk is a platform used by models to show the clothes. The platform usually projects into the audience.

38. “All Day Strong. All Day Long” sloganeer : ALEVE
Aleve is a brand name used for the anti-inflammatory drug Naproxen sodium.

40. Glass of public radio : IRA
Ira Glass is a well-respected presenter on American Public Radio, most noted for his show “This American Life”. I was interested to learn that one of my favorite composers, Philip Glass, is Ira’s first cousin.

41. Ancient Greek theaters : ODEA
In Ancient Greece an odeon (also “odeum”) was like a small theater, with “odeon” literally meaning a “building for musical competition”. Odea were used in both Greece and Rome for entertainments such as musical shows and poetry readings.

44. Animation frame : CEL
In the world of animation, a cel is a transparent sheet on which objects and characters are drawn. In the first half of the 20th century the sheet was actually made of celluloid, giving the “cel” its name.

54. Scoundrel : KNAVE
We’ve been using “knave” to mean a cad since about 1200, and as an alternative name for the jack in a deck of cards since the mid-1500s. “Knave” comes from the Old English word “cnafa”, a “boy, male servant”.

63. Seinfeld’s neighbor whose name is spoken as an epithet : NEWMAN
Wayne Knight’s most famous role is Newman in the sitcom “Seinfeld”. Knight also had a small role in a very famous movie scene, playing one of the police officers interrogating Sharon Stone’s character in “Basic Instinct”.

Down
2. Black-and-white cookie : OREO
The Oreo cookie was first introduced in 1912. The Oreo was intended to be a competitor to the very similar Hydrox cookie which had debuted four years earlier. The Oreo won the resulting battle on the grocery store shelves …

3. One of three at the base of a Steinway : PIANO PEDAL
Steinway & Sons is supplier of handmade pianos based in New York City and in Hamburg, Germany. The company was founded in Manhattan in 1853 by German immigrant Henry E. Steinway. One element of Steinway’s business model is to offer a “piano bank” service. Performing artists can “borrow” a particular piano from the bank for a particular concert or tour. About 400 pianos are in the bank, and are located over the world. The value of the bank’s collection of pianos is estimated at over $25 million.

4. North Atlantic fish : COD
In the British Isles, the most common fish that is used in traditional “fish and chips” is Atlantic cod. Cod has been overfished all over the world, and is now considered to be an endangered species by many international bodies. Confrontations over fishing rights in the North Atlantic led to conflicts called “the Cod Wars” between Iceland and the UK in the 1950s and the 1970s, with fishing fleets being protected by naval vessels and even shots being fired.

6. Yachting competition : REGATTA
The word “regatta” is Venetian dialect and was originally used to describe boat races among the gondoliers of Venice on the Grand Canal back in the mid-1600s.

8. Yo-yo or doll : TOY
Would you believe that the first yo-yos date back to at least 500 BC? There is even an ancient Greek vase painting that shows a young man playing with a yo-yo. Centuries later Filipinos were using yo-yos as hunting tools in the 1500s. “Yo-yo” is a Tagalog (Filipino) word meaning “come-come” or simply “return”.

9. Annual celebration when a 12-star flag may be flown : EUROPE DAY
Europe Day is a celebration of peace and unity across the European Union (EU) that has been held on May 9th every year since 1950. Europe Day is also the EUs flag day, and so the familiar 12-star flag is especially visible at that time of year.

12. Pulitzer-winning James : AGEE
James Agee was a noted American film critic and screenwriter. Agee wrote an autobiographical novel “A Death in the Family” that won him his Pulitzer in 1958, albeit posthumously. He was also one of the screenwriters for the 1951 classic movie “The African Queen”.

17. Large gem in the Smithsonian : HOPE DIAMOND
The Hope Diamond is a very large diamond (45.52 carats) that is a deep blue color due to trace amounts of boron found within the crystal structure. The diamond has quite a history, the legend being that in its original (larger) form it was the eye in a sculpted statue of a Hindu god. It passed through a number of hands, being recut at least twice, and in the 19th century ended up in the collection of an Anglo-Dutch banker called Henry Philip Hope, whose name is currently used for the gem. Eventually it fell into the hands of a New York diamond merchant called Harry Winston who agreed to donate it to the Smithsonian. To deliver the diamond to its new owners, Winston popped the gem into a plain brown paper bag and sent it through the US Mail.

28. Use a pogo stick : HOP
What we know today as a pogo stick was invented in Germany by Max Pohlig and Ernst Gottschall. The name “pogo” comes from the first two letters in each of the inventors’ family names: Po-hlig and Go-ttschall.

29. Place for airing an opinion … or what five of this puzzle’s Down answers contain? : OP-ED COLUMN
Op-Ed is an abbreviation for “opposite the editorial page”. Op-Eds started in “The New York Evening World” in 1921 when the page opposite the editorials was used for articles written by a named guest writer, someone independent of the editorial board.

39. Pb, to a chemist : LEAD
Plumbum is the Latin for lead, explaining why the symbol of the element in the Periodic Table is “Pb”. It also explains why the original lead weight on the end of a line used to check vertical was called a “plumb line”. And, as pipes were originally made of lead, it also explains why we would call in a “plumber” if one of them was leaking.

54. Janitor’s ringful : KEYS
A janitor is someone who takes care of the maintenance or cleaning of a building. An older definition of the term is “doorman”. Our word comes from the Latin “ianitor” meaning “doorkeeper”.

61. Bad record for a motorist, for short : DWI
In some states, there is no longer a legal difference between a DWI (Driving While Intoxicated) and a DUI (Driving Under the Influence). Other states retain that difference, so that by definition a DUI is a lesser offence than a DWI.