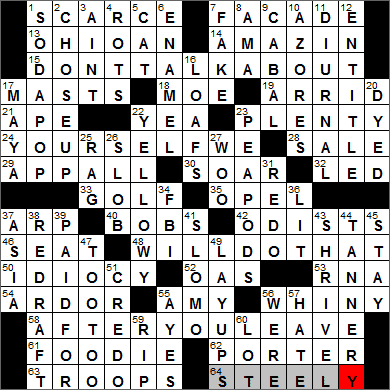 CROSSWORD SETTER: Stanley Newman
THEME: Bar Sign … the themed answers give us the text that might be seen on a (whimsical) sign at a neighborhood bar:

Today’s Wiki-est, Amazonian Googlies
Across
13. Orville Wright or Neil Armstrong : OHIOAN
Wilbur was the older of the two Wright brothers, and he was born in 1867 in Millville, Indiana. By the time that Orville was born in 1871, the family was living in Dayton, Ohio. The Wrights spent a few years of their youth back in Richmond, Indiana, before settling in Dayton for the rest of their lives. The brothers both died in Dayton; Wilbur in 1912 and Orville in 1948.

Neil Armstrong was the most private of individuals. You didn’t often see him giving interviews, unlike so many of the more approachable astronauts of the Apollo space program. His famous, “That’s one small step for (a) man, one giant leap for mankind” statement; that was something that he came up with himself while Apollo 11 was making its way to the moon.

14. ___ Avenue (Mets’ community website) : AMAZIN’
There is an online community of New York Mets fans called Amazin’ Avenue (at AmazinAvenue.com). Presumably the website is named for the Amazin’ Mets, the 1969 team that won the World Series.

18. Server of Duff Beer to Homer Simpson : MOE
Moe Szyslak is the surly bartender in “The Simpson” animated TV show. I don’t really care for “The Simpsons”, but Hank Azaria who supplies the voice for the character … him I like.

19. Dry Idea alternative : ARRID
Arrid is an antiperspirant deodorant brand introduced in the thirties. Slogans associated with Arrid have been “Don’t be half-safe – use Arrid to be sure”, “Stress stinks! Arrid works!” and “Get a little closer”.

Dry Idea is a range of personal care products that is now produced by the Dial Corporation. One of Dry Idea’s more famous taglines is “Never let them see you sweat”.

35. General Motors subsidiary : OPEL
Adam Opel founded his company in 1863, first making sewing machines in a cowshed. Commercial success brought new premises and a new product line in 1886, namely penny-farthing bicycles. Adam Opel died in 1895, leaving his two sons with a company that made more penny-farthings and sewing machines than any other company in the world. In 1899 the two sons partnered with a locksmith and started to make cars, but not very successfully. Two years later, the locksmith was dropped in favor of a licensing arrangement with a French car company. By 1914, Opel was the largest manufacturer of automobiles in Germany. My Dad had an Opel in the seventies, a station wagon (we’d say “estate car” in Ireland) called an Opel Kadett.

37. Artist known as either Jean or Hans : ARP
Hans Arp was a French artist renowned for his work with torn and pasted paper, although that wasn’t the only medium he used. Arp was the son of a French mother and German father and spoke both languages fluently. When he was speaking German he gave his name as Hans Arp, but when speaking French he called himself Jean Arp. Both “Hans” and “Jean” translate into English as “John”. In WWI Arp moved to Switzerland to avoid being called up to fight, taking advantage of Swiss neutrality. Eventually he was told to report to the German Consulate and fill out paperwork for the draft. In order to get out of fighting, Arp messed up the paperwork by writing the date in every blank space on the forms. Then he took off all of his clothes and walked with his papers over to the officials in charge. He was sent home …

40. Gatsby-era hairstyles : BOBS
A “bob cut” is a short hairstyle in which the hair is cut straight around the head, at about the line of the jaw. Back in the 1570s a “bob” was the name given to a horse’s tail that was cut short, and about a century later it was being used to describe short hair on humans. The style became very popular with women in the early 1900s (as worn by actress Clara Bow, for example), with the fashion dying out in the thirties. The style reemerged in the sixties around the time the Beatles introduced their “mop tops”, with Vidal Sassoon leading the way in styling women’s hair in a bob cut again. Personally, I like it …

“The Great Gatsby” is the 1925 novel by F. Scott Fitzgerald, that tells of the prosperous life of Jay Gatsby during the Roaring 20s. Gatsby develops an obsessive love for Daisy Fay Buchanan, a girl he met while serving during WWI, and meets again some years later after he has improved his social standing.

42. Some Coleridge colleagues : ODISTS
Samuel Taylor Coleridge was a pioneer for the Romantic Movement in England, along with his friend William Wordsworth. Coleridge’s most famous works are “The Rime of the Ancient Mariner” and “Kubla Khan”, my wife’s favorite poem.

52. Alliance HQ’d near the White House : OAS
The Organization of American States (OAS) has its headquarters in Washington, D.C. All the independent states in the Americas are members of the group except Honduras, which had its membership suspended after the country’s 2009 coup.

53. Key molecule for protein synthesis : RNA
Ribonucleic Acid (RNA) is an essential catalyst in the manufacture of proteins in the body. The genetic code in DNA determines the sequence of amino acids that make up each protein. That sequence is read in DNA by messenger RNA, and amino acids are delivered for protein manufacture in the correct sequence by what is called transfer RNA. The amino acids are then formed into proteins by ribosomal RNA.

55. Adams of “American Hustle” : AMY
Amy Adams is an American actress. although she was actually born in Vicenza, Italy. My favorite film of hers so far is the outstanding “Julie & Julia” in which she acted alongside Meryl Streep. I highly recommend this truly delightful movie.

“American Hustle” is a 2013 movie with a plotline that is loosely based on the famous FBI ABSCAM sting of the late seventies and early eighties. The film stars Christian Bale and Amy Adams as two con artists who are forced to work with an FBI agent played by Bradley Cooper.

The FBI set up a sting operation in 1978, eventually targeting corruption within Congress. Central to the “scam” was a front company called “Abdul Enterprises, Ltd”, giving the whole operation the nickname “Abscam”. At the end of the say, one senator and five House members were convicted of bribery and conspiracy. Kraim Abdul Rahman was the fictional sheik that gave “his” name to the front company.

61. Epicurean explorer : FOODIE
An epicure is a gourmet, one who appreciates fine food and drink in particular. The term is derived from the ancient Greek philosopher Epicurus.

62. “Anything Goes” composer : PORTER
“Anything Goes” is a musical by Cole Porter, and tells of the goings on aboard an ocean liner sailing from New York to London. Some of the famous songs from the show are “Anything Goes”, “You’re the Top”, “I Get a Kick Out of You” as well as “The Gypsy in Me”.

63. U.S.O. Care Package recipients : TROOPS
The United Service Organization (USO) was founded in 1941 at the request of FDR “to handle the on-leave recreation of the men in the armed forces”. A USO tour is undertaken by a troupe of entertainers, many of whom are big-name celebrities. A USO tour usually includes troop locations in combat zones.

Down
3. “Hit ’em where they ___” : AIN’T
The phrase “Keep your eye clear, and hit ‘em where they ain’t” is advice that was first given by professional baseball player Willie Keeler. Keeler played from 1892 to 1910, mainly for the Baltimore Orioles, Brooklyn Superbas and New York Highlanders.

9. Ring of rebels : CABAL
A cabal is a small group of secret plotters, perhaps scheming against a government or an individual.

10. Columbus stopping point of 1493 : AZORES
The Azores is an archipelago of nine volcanic islands in the North Atlantic lying about 1,000 miles west of Portugal. The Azores are an autonomous region belonging to Portugal.

Christopher Columbus made four voyages of discovery to the Americas. The first voyage, of 1492-1493, took Columbus and his crew to several islands in the Caribbean including Cuba. His return to Europe was via the Azores, specifically the island of Santa Maria.

17. Pre-Columbian civilization : MAYA
The Maya civilization held sway in Central America and Mexico from about 350 AD until the arrival of the Spanish in the 1500s.

The pre-Columbian era is that period in the history of the Americas before the Europeans really made their presence known. “Pre-Columbian” implies “before 1492, before the voyages of Christopher Columbus”.

25. Many a tune in “The Sting” : RAG
Ragtime music was at the height of it popularity in the early 1900s. It takes its name from its characteristic “ragged” rhythms. The most famous ragtime composer was Scott Joplin, who had a big hit with his “Maple Leaf Rag” when it was published in 1899. He followed that up with a string of hits, including the “Pine Apple Rag” (sic). Ragtime fell out of favor about 1917 when the public turned to jazz. It had a resurgence in the forties when jazz musicians started to include ragtime tunes in their repertoires. But it was the 1973 movie “The Sting” that brought the true revival, as the hit soundtrack included numerous ragtime tunes by Scott Joplin, including the celebrated “The Entertainer” originally published in 1902.

“The Entertainer” is a piano rag from the very early 1900s that was written by Scott Joplin. “The Entertainer” regained its popularity in the 1970s when it was chosen as the theme music for the marvelous film “The Sting”. The ragtime score in “The Sting” was a bit of an anachronism, as the popularity of ragtime music had waned by the 1930s, the era in which the film was set.

34. Patriot Act enforcer : FBI
The USA PATRIOT Act was signed into law in 2001 soon after the September 11th terrorist attacks. The name of the act is actually an acronym, standing for “Uniting and Strengthening America by Providing Appropriate Tools Required to Intercept and Obstruct Terrorism”.

Suede is leather made from the underside of the skin, mainly from a lamb. As such it is very soft, although not as durable as leather made from the exterior skin. The soft leather was, and is still used for making gloves. Back in 1859 these gloves were called “gants de Suede” in France, or “gloves of Sweden”. So, the name “suede” comes from the French word for Sweden.

51. Belief : CREDO
“Credo” is the Latin word for “I believe”, and we use it in English as an alternate for “creed”.

59. Cut in the direction of the grain : RIP
In woodworking, a cut across the grain is known as a cross cut. A cut along the grain is called a rip cut. Most saws are designed to perform the best cross cuts, but there is a special rip saw that more easily cuts straight lines along the grain.

60. Christie’s offering : LOT
Christie’s is an auction house based in London, the largest auction house in the world. The business was founded in 1766 by James Christie.