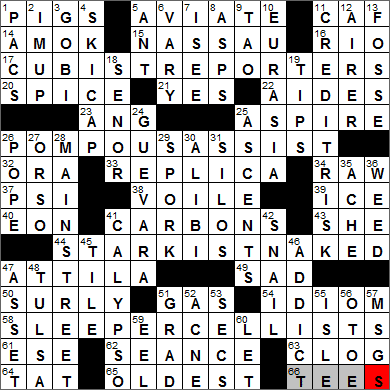 17A. Journalists covering abstract art? : CUBIST REPORTERS (from “cub reporters”)
26A. Help from a jerk? : POMPOUS ASSIST (from “pompous ass”)
44A. Canned tuna without mayo? : STARKIST NAKED (from “stark naked”)
58A. Narcoleptics with string instruments? : SLEEPER CELLISTS (from “sleeper cells”)

Today’s Wiki-est, Amazonian Googlies
Across
1. Fare in “blankets” : PIGS
“Pigs in a blanket” are usually hot dogs that have been wrapped and cooked in some kind of dough. Over in Scotland, the same dish is called a “kilted sausage”.

5. Do the Wright thing? : AVIATE
Wilbur was the older of the two Wright brothers, and he was born in 1867 in Millville, Indiana. By the time that the younger Orville was born in 1871, the family was living in Dayton, Ohio. The Wrights spent a few years of their youth back in Richmond, Indiana, before settling in Dayton for the rest of their lives. The brothers both died in Dayton; Wilbur in 1912 and Orville in 1948.

14. In a frenzy : AMOK
The phrase “to run amok” (sometimes “to run amuck”) has been around since the 1670s and is derived from the Malay word for “attacking furiously”, “amuk”. The word “amok” was also used as a noun to describe Malay natives who were “frenzied”. Given Malaya’s troubled history, the natives probably had good reason for that frenzy …

15. Bahamas cruise stop : NASSAU
Nassau, the capital of the Bahamas, used to be called Charles Town. After having been burnt to the ground by the Spanish in 1684, it was rebuilt and named Nassau in honor of King William III of England, a Dutchman from the House of Orange-Nassau (aka William of Orange). Nassau is a favored location for the James Bond series of movies. The city and surroundings feature in “Thunderball”, “Never Say Never Again”, “Casino Royale” and “For Your Eyes Only”.

16. South American cruise stop, for short : RIO
Rio de Janeiro is the second largest city in Brazil (after São Paulo). “Rio de Janeiro” translates as “January River”. The name reflects the discovery of the bay on which Rio sits, on New Years Day in 1502.

17. Journalists covering abstract art? : CUBIST REPORTERS (from “cub reporters”)
In the art movement known as Cubism, objects which are the subject of a painting are broken up and reassembled in an abstract form. The pioneers of the Cubist movement were Pablo Picasso and Georges Braque.

20. Coriander, for one : SPICE
What we know here in North America as cilantro is called coriander in the UK and other parts of the world. “Cilantro” is the Spanish name for the herb.

37. Letters on a radial : PSI
Pounds per square inch (PSI)

Radial tires (actually “radial-ply tires) are so called because the cord plies embedded in the rubber are arranged radially from the centre of the tire. This means that the plies are at right angles to the direction of travel. In older tires the plies were criss-crossed over each other, at angles of 60 and -60 degrees from the direction of travel. Such tires are called “cross-ply” or “bias” tires.

38. Sheer curtain fabric : VOILE
Voile is a soft and sheer fabric usually made from cotton that is often used as a window treatment. Voile curtains are similar to net curtains and may be used as mosquito nets, for example. Aptly enough, “voile” is the French word for “veil”.

41. Typists’ copies, once : CARBONS
I wonder do the kids of today know that “cc” stands for carbon copy, and do they have any idea what a carbon copy was? Do you remember how messy carbon paper was to handle?

44. Canned tuna without mayo? : STARKIST NAKED (from “stark naked”)
StarKist is a brand of tuna that uses Charlie the Tuna as its cartoon mascot.

47. The Scourge of God : ATTILA
In his day, Attila the Hun was the most feared enemy of the Roman Empire, until he died in 453 AD. Attila was the leader of the Hunnic Empire of central Europe and was famous for invading much of the continent. However, he never directly attacked Rome. Attila was called “Attila, Flagelum Dei”, Latin for “Attila, Scourge of God”.

51. Shell carries it : GAS
Royal Dutch Shell is the largest energy company in the world and is headquartered in the Hague, in the Netherlands. The company was formed in 1907 with the merger of the Royal Dutch Petroleum Company and Shell Transport and Trading company of the UK. The two companies merged in order to compete globally with the biggest US oil company of the day, John D. Rockefeller’s Standard Oil. Shell Oil Company is a US-based subsidiary of Royal Dutch Shell that is headquartered in Houston, Texas.

54. Jump the shark, e.g. : IDIOM
The phrase “jumping the shark” has been used since 1977 to describe the moment in the life of a TV show when it starts to decline in popularity. The expression comes from a scene in the hit sitcom “Happy Days” when the character Fonzie gets on waterskis and is seen to literally jump over a shark. “Happy Days” never recovered.

58. Narcoleptics with string instruments? : SLEEPER CELLISTS (from “sleeper cells”)
A “sleeper cell” is a group of covert agents who lie dormant until ordered into action.

64. Mike Tyson facial feature, for short : TAT
The word “tattoo” (often shortened to “tat”) was first used in English in the writings of the famous English explorer Captain Cook. In his descriptions of the indelible marks adorning the skin of Polynesian natives, Cook anglicized the Tahitian word “tatau” into our “tattoo”.

The boxer Mike Tyson has said some pretty graphic things about his opponents. For example:

65. Guinness Book superlative : OLDEST
“The Guinness Book of World Records” holds some records of its own. It is the best-selling, copyrighted series of books of all time and is one of the books most often stolen from public libraries! The book was first published in 1954 by two twins, Norris and Ross McWhirter. The McWhirter twins found themselves with a smash hit, and eventually became very famous in Britain hosting a TV show based on world records.

Down
1. “Super” campaign orgs. : PACS
A Political Action Committee (PAC) is a private group that works to influence the outcome of a particular election or group of elections. Any group becomes a PAC by law when it receives or spends more than $1,000 for the purpose of influencing the outcome of an election. In 2010 the Supreme Court ruled that PACS that did not make direct contributions to candidates or parties could accept unlimited contributions. These “independent-expenditure only committees” are commonly referred to as “super PACs”.

3. Desert that occasionally gets snow : GOBI
The large desert in Asia called the Gobi lies in northern China and southern Mongolia. The Gobi desert is growing at an alarming rate, particularly towards the south. This “desertification” is caused by increased human activity. The Chinese government is trying to halt the desert’s progress by planting great swaths of new forest, the so called “Green Wall of China”.

5. Hobby farm denizen : ANT
Nowadays we use “denizen” to mean simply a resident, but historically a denizen was an immigrant to whom certain rights had been granted, something like today’s “resident alien”.

13. Bob who directed “Cabaret” : FOSSE
Bob Fosse won more Tony Awards for choreography than anyone else, a grand total of eight. He also won an Oscar for Best Director for his 1972 movie “Cabaret”, even beating out the formidable Francis Ford Coppola who was nominated that same year for “The Godfather”.

18. Mister in a sombrero : SENOR
In English we think of a sombrero as a wide-brimmed hat, but in Spanish “sombrero” is the word for any hat. “Sombrero” is derived from “sombra” meaning “shade”.

24. Compadre of Castro : GUEVARA
Ernesto “Che” Guevara was born in Argentina, and in 1948 he started to study medicine at the University of Buenos Aires. While at school he satisfied his need to “see the world” by taking two long journeys around South America, the story of which are told in Guevara’s memoir later published as “The Motorcycle Diaries”. While travelling, Guevara was moved by the plight of the people he saw and their working conditions and what he viewed as capitalistic exploitation. In Mexico City he met brothers Raul and Fidel Castro and was persuaded to join their cause, the overthrow of the US-backed government in Cuba. He rose to second-in-command among the Cuban insurgents, and when Castro came to power Guevara was influential in repelling the Bay of Pigs Invasion and bringing Soviet nuclear missiles to the island. Guevara left Cuba in 1965 to continue his work as a revolutionary. He was captured by Bolivian forces in 1967, and was executed. Fidel Castro led the public mourning of Guevara’s death, and soon the revolutionary was an icon for many left-wing movements around the world.

26. World leader with an eponymous “mobile” : POPE
The “Popemobile” is actually a whole fleet of vehicles used since the days of Pope John Paul II. The popemobiles used on foreign visits are often manufactured locally and then stay in the country after the visit has been concluded. The British-built popemobile used for a 2006 visit to the UK was ultimately sold for over $70,000 at auction.

29. Picnic utensil : SPORK
“Spork” is the more common name for the utensil that is a hybrid between a spoon and a fork. It is less commonly referred to as a “foon”.

30. It’s best when it’s airtight : ALIBI
“Alibi” is the Latin word for “elsewhere” as in, “I claim that I was ‘elsewhere’ when the crime was committed … I have an ‘alibi'”.

31. Towers on farms : SILOS
Silo is a Spanish word that we absorbed into English, originally coming from the Greek word “siros” that described a pit in which one kept grain.

41. Harry Belafonte genre : CALYPSO
The musical style of calypso originated in Trinidad and Tobago, but there seems to be some debate about which influences were most important in developing the genre. It is generally agreed that the music was imported by African slaves from their homeland, but others emphasize influences of the medieval French troubadours. To me it sounds more African in nature. The popularity of calypso took off when it was first recorded in 1912, and it spread around the world in the thirties and forties. It reached its pinnacle with the release of the famous “Banana Boat Song” by Harry Belafonte.

48. Tornado Alley city : TULSA
Tulsa is the second-largest city in the state of Oklahoma (after Oklahoma City). Tulsa started out as a settlement established by the Loachapoka and Creek Native American tribes in 1836. These early settlers called their new home “Tallasi” meaning “old town”, and this name morphed into “Tulsa” that we use today.

Tornado Alley has no precisely defined area, but generally lies between the Rockies and the Appalachians. It is of course the area in the US where tornadoes occur most frequently.

51. Mortarboard tosser : GRAD
Mortarboards, or square academic caps, are associated with school graduations all over the world, although traditions do differ. For example in Ireland (where I come from), mortarboards are only worn by female graduates.