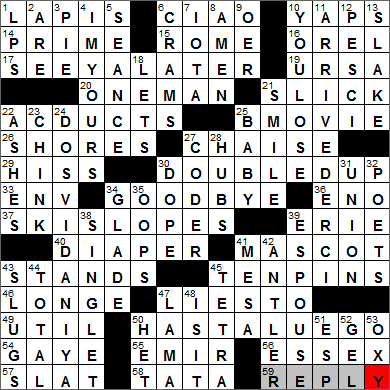 Today’s Wiki-est, Amazonian Googlies
Across
1. ___ lazuli : LAPIS
Lapis lazuli is a blue, semi-precious stone mined mainly in Afghanistan. Lapis Lazuli is Latin for “stone of Lazhward”, referring to the Persian name for the location where the stone was mined. Our word “azure”, a shade of blue, has the same root.

15. All roads lead to it, in a saying : ROME
The expression “all roads lead to Rome” is used to mean “whatever way we do this, we’ll get the same result”. The phrase has been used since the 1100s and probably even earlier than that. The expression arises because the ancient Roman road system had major roads all radiating from Rome like spokes on a wheel.

16. Pitcher Hershiser : OREL
Orel Hershiser is big into poker now that he has retired from Major League Baseball. Hershiser lives in Las Vegas and when he isn’t working for ESPN, apparently he is at the poker tables.

19. ___ Major (constellation) : URSA
The constellation called Ursa Major (Latin for “Larger Bear”) is often just called the Big Dipper because of its resemblance to a ladle or dipper. Ursa Major also resembles a plow, and that’s what we usually call the same constellation back in Ireland: the “plough”.

27. ___ longue (daybed) : CHAISE
A “chaise longue” is an upholstered, sofa-like chair that is long enough to support the legs. “Chaise longue” is French for “long chair”. And, the term has nothing to do with a “lounge” … it’s a “longue” chair, not a “lounge chair”.

36. Brian who was a pioneer of ambient music : ENO
Brian Eno started out his musical career with Roxy Music. However, Eno’s most oft-played composition (by far!) is Microsoft’s “start-up jingle”, the 6-second sound you hear when the Windows operating system is booting up. Eno might have annoyed the Microsoft folks when he stated on a BBC radio show:
I wrote it on a Mac. I’ve never used a PC in my life; I don’t like them.

37. Locales for T-bars : SKI SLOPES
A T-bar is a type of ski lift in which the skiers are pulled up the hill in pairs, with each pair standing (not sitting!) either side of T-shaped metal bar. The bar is placed behind the thighs, pulling along the skiers as they remain standing on their skis (hopefully!). There’s also a J-bar, a similar device, but with each J-shaped bar used by one skier at a time.

39. Cleveland’s lake : ERIE
Cleveland, Ohio was named after the man who led the team that surveyed the area prior to founding of the city. General Moses Cleaveland did his work in 1796 and then left Ohio, never to return again.

40. Infant’s wear : DIAPER
“Diaper” is another word that I had to learn when I moved to America. What are called “diapers” over here, we call “nappies” back in Ireland. The term “diaper” is actually the original term that was used in England for the garment, where “diaper” referred to the cloth that was used. The term diaper was brought to the New World where it stuck. Back in Britain, diaper was displaced by the word “nappy”, a diminutive of “napkin”.

43. Bleachers : STANDS
At a sports event one often sits in the “bleachers”. “Bleachers” is a particularly American term for the tiered stands that provide seating for spectators. These seats were originally wooden planks, and as they were uncovered they would be “bleached” by the sun, giving them the name we use today. Sometimes the fans using the bleachers might be referred to as “bleacherites”.

45. Bowling game : TENPINS
Bowling has been around for an awfully long time. The oldest known reference to the game is in Egypt, where pins and balls were found in an ancient tomb that is over 5,000 years old. The first form of the game to come to America was nine-pin bowling, which had been very popular in Europe for centuries. In 1841 in Connecticut, nine-pin bowling was banned due to its association with gambling. Supposedly, an additional pin was added to get around the ban, and ten-pin bowling was born.

The term “adios” is of course Spanish for “goodbye”. In the Spanish language, “adios” comes from the phrase “a dios vos acomiendo” meaning “I commend you to God”.

54. Marvin of Motown : GAYE
Marvin Gaye was a singer-songwriter from Washington, D.C. who came to be known as “Prince of Soul” and “Prince of Motown”. Some of Gaye’s biggest hits are “I Heard It Through the Grapevine” (1968), “What’s Going On?” (1971), “Let’s Get It On” (1973) and “Sexual Healing” (1982). Famously, Gaye was shot dead by his father while Marvin was sitting on his mother’s bed just talking to her. Marvin had given the gun to his father as a Christmas gift.

55. Kuwaiti leader : EMIR
The State of Kuwait sits at the northern tip of the Persian Gulf, famously sharing a border to the north with Iraq. After WWI, Kuwait was a Protectorate within the British Empire and then gained independence from the UK in 1961. Iraq annexed Kuwait in 1990, which led to the Gulf War of 1990-1991.

56. Earl of ___, favorite of Elizabeth I : ESSEX
Robert Devereux was the 2nd Earl of Essex, and a favorite in the court of Queen Elizabeth I of England. Eventually however, Essex fell foul of the government and was found guilty of treason. He was executed on Tower Green in the Tower of London. Famously, his executor took three strokes of the axe to complete the beheading. Essex was the last person to be beheaded at the Tower.

Down
1. The Beatles’ “Rubber Soul” and “Revolver” : LPS
“Rubber Soul” is a 1965 Beatles album, the sixth one the band released. “Rubber Soul” was listed by “Rolling Stone” magazine as the fifth greatest album in music history.

“Revolver” is a 1966 album released by the Beatles. The title is a pun, a reference to a handgun and also a reference to the record playing on a turntable.

3. Quiche, for one : PIE
The classic dish called quiche is made with eggs (“oeufs” in French). Even though the quiche is inextricably linked to French cuisine, the name “quiche” comes from the German word for cake, “Kuchen”. The variant called “quiche lorraine” includes bits of smoked bacon as an ingredient.

4. Candy heart sentiment : I’M YOURS
The forerunner to Sweethearts candy was introduced in 1866, with the famous sayings written on the candy tailored for use at weddings. One of the original expressions was, “Married in pink, he will take a drink”. The original candy was a lot bigger, to fit all those words! The smaller, heart-shaped candy hit the shelves in 1901. We’ve been able to buy Sweethearts with the words “Text me” since 2010.

5. Event that might involve a Ouija board : SEANCE
“Séance” is a French word meaning “sitting”.

7. Letter before kappa : IOTA
Iota is the ninth letter in the Greek alphabet. We use the word “iota” to portray something very small as it is the smallest of all Greek letters.

11. “Godspeed, Bruno!” : ARRIVEDERCI!
“Ciao” is the Italian for “‘bye”. “Arrivederci” is more formal, and translates better as “goodbye”.

12. Joe of “My Cousin Vinny” : PESCI
Joe Pesci got his big break in movies with a supporting role in “Raging Bull” starring Robert De Niro, earning Pesci an Oscar nomination early in his career. There followed a string of gangster roles played alongside De Niro, namely “Once Upon a Time in America”, “Goodfellas” and “Casino”. But I like Pesci’s comedic acting best of all. He was marvelous in the “Home Alone” films, the “Lethal Weapon” series, and my personal favorite, “My Cousin Vinny”. Pesci gets a mention in the stage musical “Jersey Boys”, which isn’t too surprising as he is one of the show’s producers.

“My Cousin Vinny” is a really fun film from 1992 starring Joe Pesci and Marisa Tomei. In 2008, the American Bar Association rated “My Cousin Vinny” as the #3 Greatest Legal Movie of all time, after “To Kill a Mockingbird” and “12 Angry Man”!

13. Satisfy, as a thirst : SLAKE
“To slake” is to satisfy a craving, as in slaking one’s thirst.

21. “Peace begins with a ___”: Mother Teresa : SMILE
Mother Teresa was born in 1910 in the city that is now called Skopje, the capital of Macedonia. At birth she was given the names Agnes Gonxha Bojaxhiu (“Gonxha” means “little flower” in Albanian). She left home at the age of 18 and joined the Sisters of Loreto, and headed to Loreto Abbey in Rathfarnham in Dublin, Ireland in order to learn English. Her goal was to teach in India, and English was the language used there for instruction by the nuns. After Mother Teresa passed away in 1997 she was beatified by Pope John Paul II, a step on the road to canonization. In order for her to be beatified there had to be documented evidence of a miracle that was performed due to her intercession. The miracle in question was the healing of a tumor in the abdomen of a woman due to the application of a locket containing a picture of Mother Teresa. Documentation of a second miracle is required for her to be declared a saint.

24. “Farewell, Vladimir!” : DO SVIDANIYA!
“Do svidaniya” is Russian for “goodbye”. A more literal translations is “until we meet (again)”.

31. The “U” of U.S.S.R. : UNION
The acronym CCCP stands for “Сою́з Сове́тских Социалисти́ческих Респу́блик”, which translates from Russian as “Union of Soviet Socialist Republics”, the USSR.

32. “Dead ___ Society” : POETS
1989’s “Dead Poets Society” was directed by Peter Weir and stars Robin Williams as an English teacher who uses poetry to inspire his students. Tom Schulman wrote the somewhat autobiographical script based on his own experiences at a day school in Nashville, Tennessee. This is one of my favorite Robin Williams movies …

39. Advocate : ESPOUSE
“To espouse” is “to take in marriage”. We used the extended meaning of “to give one’s support to” since the 1600s.

53. Clearasil rival : OXY
The OXY Skin Care products were developed by GlaxoSmithKline, but the brand name has been owned by Mentholatum since 2005.