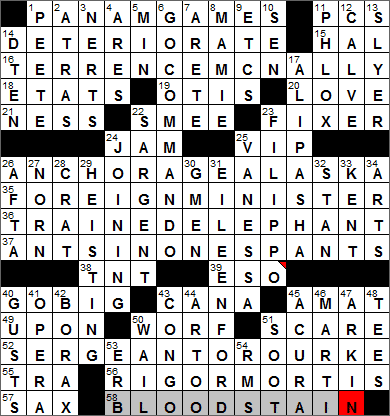 Today’s Wiki-est, Amazonian Googlies
Across
1. 2015 Toronto event : PAN AM GAMES
The Pan American Games are held every four years, the year just before the Summer Olympic Games. The participating athletes all come from the Americas.

16. “Corpus Christi” playwright : TERRENCE MCNALLY
Terrence McNally is a playwright from St. Petersburg, Florida who was raised in Corpus Christi, Texas. McNally actually wrote a play called “Corpus Christi” in 1997, a passion play based on the life of Jesus and the Apostles. The play was condemned by many when it opened due to its exploration of gay themes in Christianity. McNally even received death threats.

18. Ones united in France? : ETATS
“Les États-Unis d’Amérique” is what French speakers call “the United States of America”.

19. Manufacturer of boxy cars : OTIS
Elevators (simple hoists) have been around for a long time. What Elisha Otis did was come up with the “safety elevator”, a design that he showcased at the 1853 World’s Fair in New York. At the Fair, Otis would stand on an elevated platform in front of onlookers and order his assistant to cut the single rope holding up the platform. His safety system kicked in when the platform had only fallen a few inches, amazing the crowd. After this demonstration, the orders came rolling in.

22. “Return to Never Land” role : SMEE
In J. M. Barrie’s play and novel about Peter Pan, Smee is one of Captain Hook’s pirates and is Hook’s right-hand man. Smee is described by Barrie as being “Irish” and “a man who stabbed without offence”. Nice guy! Captain Hook and Smee sail on the pirate ship called the Jolly Roger.

23. Darkroom chemical solution : FIXER
In black and white photography, photographic film and paper both contain tiny silver halide crystals in a layer of emulsion. If the silver ion in the halide is exposed to light then it is converted from an ion into metallic silver. Visually there is no difference at this stage between the light-exposed and unexposed parts of the film/paper. When a liquid developer (such as amidol) is applied, then the metallic silver is reduced, turning the silver into metallic crystals that make up the dark areas of the exposed film or paper. A solution known as a “fixer” is then used to remove unexposed silver halide, hence rendering the image insensitive to further action by light.

26. U.S. city that’s almost as large in area as Delaware : ANCHORAGE, ALASKA
Anchorage, Alaska is the northernmost city in the US with over 100,000 residents (in fact it has a population close to 300,000). It is the state’s most populous city and is home to more than 40% of Alaska’s residents.

35. Part of a French cabinet : FOREIGN MINISTER
The Quai d’Orsay in Paris is a quay and street along the left bank of the River Seine. The Ministry of Foreign Affairs is located there, and the French commonly use “Quai d’Orsay” as a nickname for the Ministry.

36. Jumbo, e.g. : TRAINED ELEPHANT
James Anthony Bailey collaborated with P. T. Barnum to establish Barnum and Bailey’s Circus. It was Bailey who negotiated the deal to buy a famous elephant from London Zoo in 1882, the one called “Jumbo”. It was the exposure that Jumbo got in the circus that brought into common usage our term “jumbo” meaning “huge”.

37. Shpilkes : ANTS IN ONE’S PANTS
“Shpilkes” is a Yiddish word for “nervous energy, sitting on pins and needles”. The term is related to the Polish word “szpilka” meaning “pin”.

38. Certain shell contents : TNT
TNT is an abbreviation for trinitrotoluene. Trinitrotoluene was first produced in 1863 by the German chemist Joseph Wilbrand, who developed it for use as a yellow dye. TNT is relatively difficult to detonate so it was on the market as a dye for some years before its more explosive properties were discovered.

39. Joan Sebastian’s “___ y Más” : ESO
Joan Sebastian is a popular Mexican singer-songwriter who has been featured regularly in the Mexican top-40 charts since 1977.

43. Miracle site : CANA
According to the Christian Bible, Cana is the place where Jesus performed his first public miracle. Jesus was attending a wedding feast with his mother when the party ran out of wine. Jesus turned water into wine, wine that was judged to be the best served at the feast.

50. Enterprise Klingon : WORF
in the television series “Star Trek: The Next Generation”, Mr. Worf is one of the main characters. Work is a Klingon officer on the Enterprise, and is played by Michael Dorn. Worf is a unique character in the “Star Trek” franchise in that he also appeared regularly in another “Star Trek” show: “Star Trek: Deep Space Nine”.

52. Forrest Tucker’s “F Troop” role : SERGEANT O’ROURKE
In the sixties sitcom “F Troop”, US Army Sergeant Morgan Sylvester O’Rourke was played by actor Forrest Tucker. Tucker had actually been a member of the US Army cavalry in real life, although he was discharged when his superiors discovered that he was actually underage.

Relatively few people outside of the US saw the American sitcom “F Troop”, which was made in the sixties. I remember watching the show as a young lad because it was picked up by the Irish national television service. The only other country that showed “F Troop” was Australia.

56. What solidifies things in the end? : RIGOR MORTIS
Rigor mortis is a stiffening of the human body that starts to set in 3-4 hours after death. The stiffening is caused by chemical changes in the muscles, which make the limbs difficult to move. The stiffness reaches a peak about 12 hours after death and then gradually eases over the following 12 hours. The name of the condition derives from the Latin “rigor” (stiffness) “mortis” (of death).

57. Member of the E Street Band : SAX
The E Street Band is the backing group for Bruce Springsteen. The band came together in 1972 but didn’t take a formal name until two years later. The keyboard player in the original line up was David Sancious, and his mother allowed the group to rehearse at her home. That home was on E Street in Belmar, New Jersey, and that’s where the band got their name.

Down
1. Golfer Calvin : PEETE
Calvin Peete was the most successful African American golfer on the PGA tour before Tiger Woods hit the circuit. Peete was a member of the Ryder Cup teams of 1983 and 1985.

2. Quattro relatives : ATRAS
Fortunately for crossword setters, the Atra razor was introduced by Gillette in 1977. The Atra was sold as the Contour in some markets and its derivative products are still around today.

Quattro (Italian for “four”) is a series of four-bladed safety razors made by Wilkinson Sword under the brand name Schick.

3. Quaint complaint : NERTS
“Nerts” is a slang term, a corruption of “nuts” and has the same meaning.

4. Husband of Otrera : ARES
Otrera was a Queen of the Amazons in Greek mythology, and the consort of Ares, the Greek god of war.

7. Formation from glaciation : ARETE
An arete is ridge of rock defining the border between two parallel valleys that have been formed by glaciation. If the ridge between the valleys is rounded, it is called a “col”. However if it is “sharpened”, with rock falling way due to successive freezing and thawing, then it is called an “arete”. “Arête“ is the French word for “fish bone”.

8. Former first lady : MAMIE
Mamie Eisenhower has to have been one of the most charming of all the First Ladies of the United States. Ms. Eisenhower suffered from an inner ear complaint called Ménière’s disease which caused her to lose her balance quite often. Because she was unsteady on her feet there were unfounded rumors floating around Washington that Ms. Eisenhower had a drinking problem. People can be very unkind …

11. Jacob’s-ladder, for one : PHLOX
Phlox is a genus of flowering plants found mainly in North America. The common name for the plant is Jacob’s Ladder.

12. Make a little lower? : CALVE
The cattle (calves) are lowing.

22. 19th-/20th-century U.S. portraitist : SARGENT
John Singer Sargent was an American artist, best known for his portrait painting. Sargent trained as an artist mainly in Paris, although he found that he had to leave the city after one of his paintings was deemed “scandalous” by French society. The work was “Portrait of Madame X” (1884), a painting of a noted lady in society that was considered too risque and sensual. After the painting was exhibited, his commissions dried up and Sargent moved to London in order to continue his career. Today the “Portrait of Madame X” is considered by many to be Sargent’s best work.

Samuel Barber was one of the most respected composers of 20th-century classical music. Barber’s most famous work is probably “Adagio for Strings”, a piece that has been used a lot in television and movies, including a memorable scene in the movie “Platoon”.

26. Mennen line : AFTA
Afta is an aftershave in the Mennen range of products that is owned by Colgate-Palmolive.

27. Scandinavian goddess of fate : NORN
The Norns were female goddesses in Norse mythology. These female deities ruled the destiny of men. Sure, hasn’t it always been that way? Just kidding!!

28. Suffix with pluto- : CRAT
A plutocracy is a society in which a small minority of wealthy citizens dominate.

29. “Ocean’s Eleven” activity : HEISTING
“Ocean’s 11” is a great film from 1960, starring Frank Sinatra as Danny Ocean. The original storyline is updated for the excellent 2001 remake, with George Clooney playing the lead. The 2001 remake (Called “Ocean’s Eleven”, note the spelling) spawned two sequels: “Ocean’s Twelve” in 2004 and “Ocean’s Thirteen” in 2007.

33. The Garden of England : KENT
Kent is a county in the southeast of England. Kent is a little unusual in that it shares a “land” border with France. That border nominally exists halfway through the Channel Tunnel, one end of which comes to surface in the Kent port of Folkestone. Kent’s nickname is “the Garden of England”

42. Common cleanser : BORAX
Borax is also known as sodium borate, and is a salt of boric acid. Borax is a white powder that dissolves easily in water. The compound has many uses, for example as an antifungal agent and an antiseptic.

43. Neighbor of Gabon : CONGO
The Republic of the Congo is a Central-African country. Prior to 1960, the country was a colony of France known as the French Congo.

44. Holder of Leia’s secret : ARTOO
In the original “Star Wars” movie, the droid called R2-D2 was entrusted with a distress message from Princess Leia.

46. Cuban revolutionary José : MARTI
José Martí was a Cuban writer and political activist who became a symbol for his country’s movement to gain independence from Spain in the 1800s. Martí was killed in action in a battle against Spanish troops in 1895.

50. Keen : WAIL
“To keen” is to wail in lamentation. The word “keening” has its roots in Ireland, coming from the Irish word “caoinim” meaning “I weep, wail, lament”.

51. Flue problem : SOOT
The flue in a chimney is a duct that conveys exhaust gases from a fire to the outdoors. An important feature of a flue is that it is adjustable. When starting a fire, the flue should be wide open, maximizing airflow to get help ignition. When the fire is burning, flow through the flue should be more restricted. The flue needs to be open sufficiently to allow smoke and exhaust gases exit, but not too wide so that too much hot air escapes, dragging cold air into the house from elsewhere.

53. Literary inits. : ERB
Edgar Rice Burroughs (ERB) was the creator of the “Tarzan” series of books.

“Tarzan” is the title character in the series of books created by Edgar Rice Burroughs. The line “Me Tarzan, you Jane” never appeared in the books, and indeed doesn’t even figure in the movies. Apparently Johnny Weissmuller (who played Tarzan in the thirties and forties) saw Maureen O’Sullivan (“Jane”, to Weissmuller’s “Tarzan”) struggling with a suitcase in the parking lot during filming. He grabbed the bag from her, jokingly saying “Me Tarzan, you Jane”, and people have been quoting those words ever since.