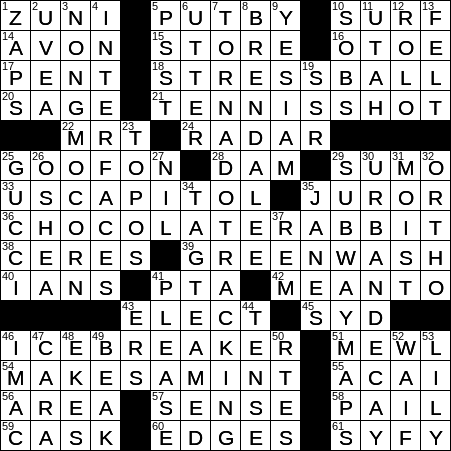 Constructed by: Jack Mowat
Edited by: Will Shortz

16 Neighbors of the Omaha : OTOE

The Omaha Nation was one of the most welcoming of the Native American tribes, never resisting the influx of European explorers and traders. The Omaha even fought alongside Union troops during the American Civil War, and have stood by the US people ever since. Regardless, the Omaha people lost most of their land and now reside on the Omaha Reservation in northeastern Nebraska and western Iowa.

24 Need for 7-Down : RADAR
(7D Activity for a storm chaser : TORNADO TRACKING)

40 Johns across the pond : IANS

55 Fruit with a cedilla in its name : ACAI

A cedilla is the diacritical mark found under the letter C in many French words, as in the words “garçon” and “façade”.

Milan is Italy’s second largest city, second only to Rome. Milan is a European fashion capital, the headquarters for the big Italian fashion houses of Valentino, Gucci, Versace, Armani, Prada and others. Mario Prada was even born in Milan, and helped establish the city’s reputation in the world of fashion.

Rapper Ice Cube’s real name is O’Shea Jackson Sr. Since the year 2000, Ice Cube has gradually moved away from rap music and focuses more on acting. The 2015 movie “Straight Outta Compton” tells the story of the gangsta rap group N.W.A., of which Ice Cube was a member. Ice Cube co-produced the film, and O’Shea Jackson Jr. played his real-life Dad on screen.

37 When most dreams occur : REM

“Schnozz” is a slang term for a nose, particularly a large one.