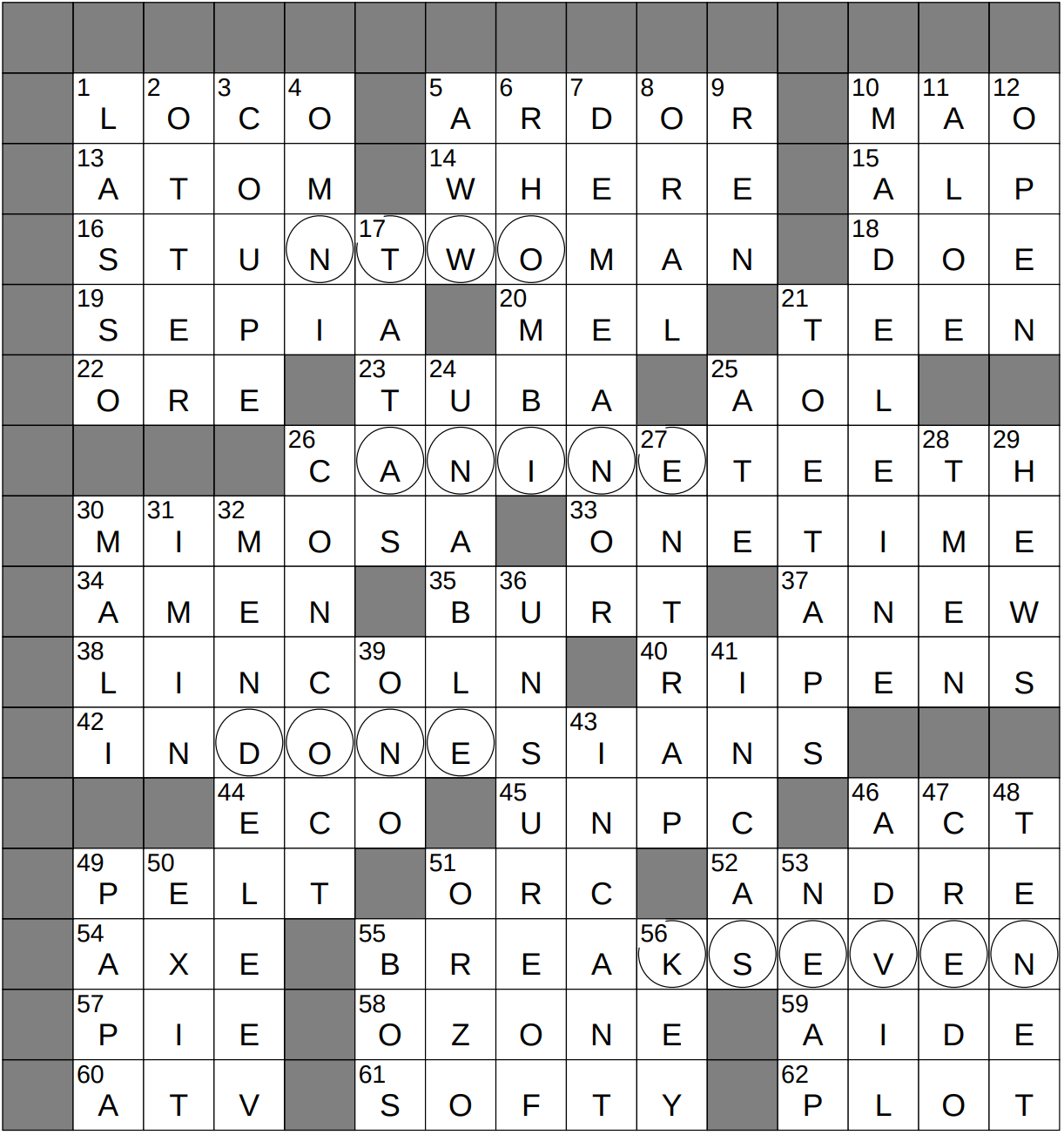 Constructed by: Dan Caprera
Edited by: Will Shortz

Themed answers each include an alphanumeric coordinate hidden within. PLOTTING those coordinates (using the numbers and letters outside the grid … not mine, sadly) spell out the word PLOT:

“Nixon in China” is an opera by John Adams, with a libretto by Alice Goodman. The piece was inspired by President Nixon’s famous visit to China in 1972.

13 Its behavior is described by quantum physics : ATOM

Sepia is that rich, brown-gray color so common in old photographs. “Sepia” is the Latinized version of the Greek word for cuttlefish, as sepia pigment is derived from the ink sac of the cuttlefish. Sepia ink was commonly used for writing and drawing as far back as ancient Rome and ancient Greece. The “sepia tone” of old photographs is not the result of deterioration over time. Rather, it is the result of a deliberate preservation process which converts the metallic silver in the photographic image to a more stable silver sulfide. Prints that have been sepia-toned can last in excess of 150 years.

20 Giedroyc of “The Great British Bake Off” : MEL

“The Great British Bake Off” is a television baking competition introduced by the BBC in the UK in 2010. The show was a phenomenal and perhaps surprising success almost immediately. “Bake Off” is rebroadcast in the US by PBS as “The Great British Baking Show”. There was great controversy in the UK in 2016 when the BBC couldn’t find the fund to pay the producers for the show, and so it had moved to a new channel, with a new set of hosts. The BBC hosts decided not to move with the show, saying they weren’t interested in the “dough” (their pun!).

23 Instrument that superseded the ophicleide : TUBA

35 Beekeeper Shavitz, who lent his name to a popular lip balm : BURT

Burt’s Bees is a line of personal care products that uses natural ingredients with minimal processing. The company started out in 1984 as a partnership between two entrepreneurs making candles out of excess beeswax from hives owned by one of the partners. Today the company has over $250 million in sales and is a division of Clorox.

The 2012 movie “Lincoln” is a historical drama that portrays the last four months of the life of President Abraham Lincoln. The main focus in the story is Lincoln’s work to have the US House of Representatives pass the Thirteenth Amendment to the US Constitution, the amendment that finally abolished slavery. “Lincoln” was co-produced and directed by Steven Spielberg and stars Daniel Day-Lewis and Sally Field and Abraham and Mary Todd Lincoln. It’s a film I’d recommend …

Irish-English actor Daniel Day-Lewis has three Best Actor Oscars, for his performances in:

A pelt is the skin of a furry animal.

The first of the “American Pie” sex comedy films was released in 1999. The series now includes some “American Pie Presents” spin-off movies that were released direct-to-video.

Suzuki is a Japanese manufacturer, mainly of cars, motorcycles and all-terrain vehicles. The company was founded in 1909 by Michio Suzuki, initially to build weaving looms for the silk industry.

A madeleine is a small sponge cake associated with the Commercy and Liverdun communes in northeastern France.

Succulent plants are those with thickened stems and/or leaves that have evolved to retain water. As such, succulents are often found where the climate is particularly dry. The term “succulent” comes from the Latin “sucus” meaning “juice, sap”.

A T-man is a law-enforcement agent of the US Treasury (“T” stands for “Treasury”).

The Boston Red Sox are one of the most successful Major League Baseball teams and so command a large attendance, but only when on the road. The relatively small capacity of Boston’s Fenway Park, the team’s home since 1912, has dictated that every game the Red Sox have played there has been a sell-out from May of 2003 to April 2013. I recently had the pleasure of touring Fenway Park. It’s quite a place …