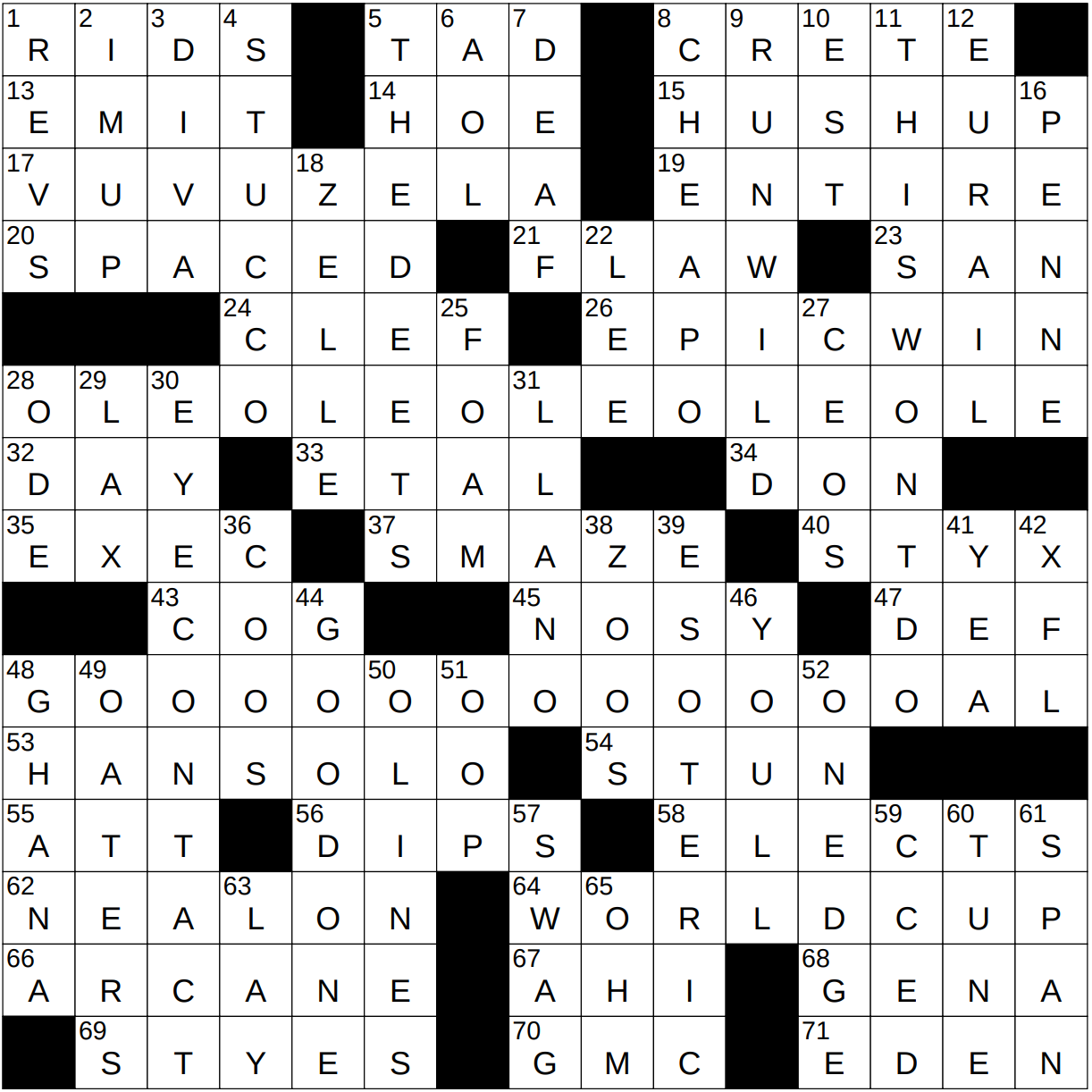 Themed answers are all things heard at a WORLD CUP soccer match:

8 Largest of the Greek islands : CRETE

Crete is the largest of the Greek Islands, and figures heavily in Greek mythology. Zeus was born in a cave at Mount Ida, the highest peak on the island. Crete was also home to the Labyrinth where the Minotaur was slain by Theseus. Icarus and Daedalus, after having crafted the Labyrinth, escaped from the island using wings that they crafted.

17 South African horn that produces only one note : VUVUZELA

21 Having a thermal exhaust port lead straight to the reactor of your Death Star, e.g. : FLAW

Back in the day, when reciting the alphabet, it was common to emphasize that some letters could be used as a word in itself. One would say “A per se A, B, C, D … I per se I, J, K, L … denoting that the letters A and I are also their own words. It was common to add the & symbol at the end of the recitation, as if it were a 27th letter. So the alphabet ended with “X, Y, Z, & (and) per se and”. This “and per se and” statement was slurred to “ampersand”, giving the name that we use today for the & symbol.

34 Cheadle of the Avengers films : DON

Don Cheadle is a Hollywood actor who is perhaps best known for his lead role in the 2004 drama “Hotel Rwanda” that deals with the harrowing subject of genocide. Since then, Cheadle has been very active in campaigns to end genocide in Darfur, Sudan.

“Smaze” is a weather phenomenon, a smoky haze that is like a fog but less damp. The term is a portmanteau of “smoke” and “haze”.

40 Mythical river of the underworld : STYX

In football, a quarterback’s (QB’s) performance can be measured by attempts (ATT), a statistic (stat).

GMC is a division of General Motors (GM) that was established in 1901 and started out as “GMC Truck”.

The term “diva” comes to us from Latin via Italian. It is the feminine form of “divus” meaning “divine one”. The word is used in Italy to mean “goddess” or “fine lady”, and especially is applied to the prima donna in an opera. We often use the term to describe a singer with a big ego.

4 It means “plaster” in Italian : STUCCO

In my days as a student, the way to backpack around Europe was using a Europass. Nowadays that is known as a Eurail pass. The Eurail pass gives you access to most trains (and some shipping lines) right across the continent.

Penne alla vodka is a pasta dish with a sauce made of vodka, cream, tomatoes, onions and sausage or bacon.

“Honcho” is a slang term meaning “leader”. The word comes to us from the Japanese military, in which language a “hancho” is a “squad” (han) “leader” (cho).

57 Branded freebies at an event : SWAG

Swag is loot, stolen property, and a term that started out as criminal slang in England in the 1830s. “Swag” is also the name given to the promotional freebies available at some events. That said, there’s an urban myth that the promotional version of “swag” is an acronym standing for “stuff we all get”.