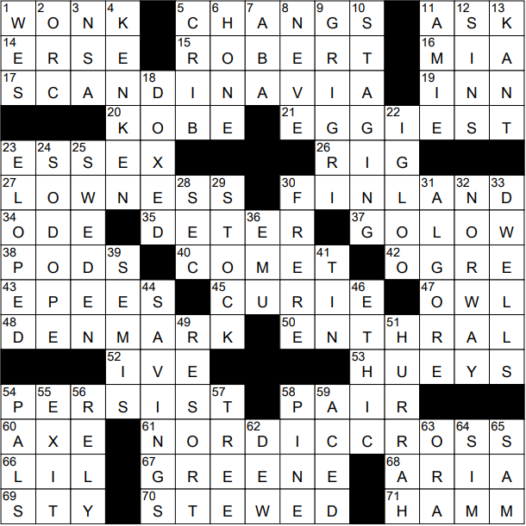 Constructed by: Tao Platt
Edited by: Will Shortz

Themed answers are nations with flags featuring a Nordic cross. The grid includes two Nordic crosses made from black squares:

P. F. Chang’s restaurant was founded in Scottsdale, Arizona in 1993. The restaurant’s name comes from the names of the two founders, Paul Fleming (P. F.) and Philip Chiang (simplified to “Chang”).

Mia Farrow is an energetic, award-winning actress who really hasn’t looked back in her career since playing her first lead role, in “Rosemary’s Baby” back in 1968. Her on-screen celebrity is matched by the interest created by her personal life. Farrow’s first husband was Frank Sinatra, a wedding in 1966 that received a lot of attention partly due to the couple’s age difference (she was 21, he was 50). Her second husband was almost as famous, the magnificent musician André Previn. Farrow then embarked on a relationship with Woody Allen, but that famously fell apart when Farrow discovered that Allen was having a sexual relationship with Soon-Yi, one of her adopted daughters from the marriage with André Previn.

30 Its flag has a blue 61-Across : FINLAND
(61A Flag symbol seen twice in this puzzle’s grid : NORDIC CROSS)

The Finnish flag features a blue Nordic cross on a white background. Dating back to the early 1900s, it is also known as the “Blue Cross Flag”.

Comets and asteroids are similar, both being relatively small celestial bodies orbiting the sun. Comets differ from asteroids in that they have a coma or tail, especially when they are close enough to the sun. The coma and tail are temporary fuzzy atmospheres that develop due to the presence of solar radiation. Comets are sometimes referred to as “dirty snowballs”, a reference to their composition: rock, dust, water ice and frozen gases.

48 Its flag has a white 61-Across : DENMARK
(61A Flag symbol seen twice in this puzzle’s grid : NORDIC CROSS)

To enthrall is to enchant. An obsolete meaning of the term is “to enslave, to hold as a thrall”. “Thrall” is an old word meaning “serf, slave”. So, to enthrall someone is to make them a slave to one’s charm. Quaint …

The military helicopter known as the Bell UH-1 Iroquois is usually referred to as the “Huey”. The Huey was first used by the US Army for medevac and utility operations in the mid-fifties. About 7,000 Hueys saw service in the Vietnam War. The US military phased out the Huey relatively recently, mainly replacing it with the UH-60 Black Hawk.

A Nordic cross is featured on the flags of all Nordic countries. It is a cross symbol with the center of that cross nearer the hoist than the fly of the flag, i.e. nearer the inside than the outside.

4 Logic puzzle invented by a math teacher as a teaching tool : KENKEN

“To hone” is to sharpen, a verb derived from the noun “hone” A “hone” is a whetstone used in sharpening.

Immanuel Kant was an 18th-century German philosopher. Kant published “Perpetual Peace” in 1795, laying out what he believed were conditions for ending all wars and creating a lasting peace. The good news for us is that one of these conditions was to have a world full of constitutional republics, so it seems we are on the right track here in the US!

Doxing (also “doxxing”) is the publishing of private information about someone on the Internet with the intention of doing harm or causing embarrassment. The term “doxing” is slang, and comes from “dox”, an accepted abbreviation for “documents”.

22 Home with a northern exposure : IGLOO

23 Got married in Vegas, perhaps : ELOPED

Las Vegas is known as the Marriage Capital of the World due to the incredibly high number of weddings that take place there. Historically, the marriage “frenzy” started when it became relatively easy to get a marriage license, and when wedding ceremonies could be performed for a nominal fee.

25 Its flag has a yellow 61-Across : SWEDEN
(61A Flag symbol seen twice in this puzzle’s grid : NORDIC CROSS)

The flag of Sweden features a golden yellow Nordic cross on a light blue background. The current design dates back to 1906.

“Frère Jacques” is a children’s song from France. The French lyrics are:

George W. Bush won the 2000 US presidential election over Al Gore despite losing the popular vote. The result of the electoral college effectively came down to a narrow margin of votes in Florida, which triggered a recount. Eventually, the US Supreme made a decision that effectively stopped the recount, and allowed a vote certification for candidate Bush to stand. President Bush wasn’t the first candidate to take the office without winning the popular vote. Three earlier presidents came to office in the same way : John Quincy Adams (1824), Rutherford B. Hayes (1876) and Benjamin Harrison (1888). Subsequently, Donald J. Trump (2016) did the same thing.

32 Its flag has a blue-and-white 61-Across : NORWAY
(61A Flag symbol seen twice in this puzzle’s grid : NORDIC CROSS)

The flag of Norway consists of a blue Nordic cross outlined in white, which sits on a red background. The current design dates back to 1821. The Norwegian armed forces have a unique practice when on international missions. They may keep a flag raised during the night, and illuminated by a spotlight. The custom dates back to WWII, when it symbolized that the fight against the enemy would carry on day and night, until final victory was achieved.