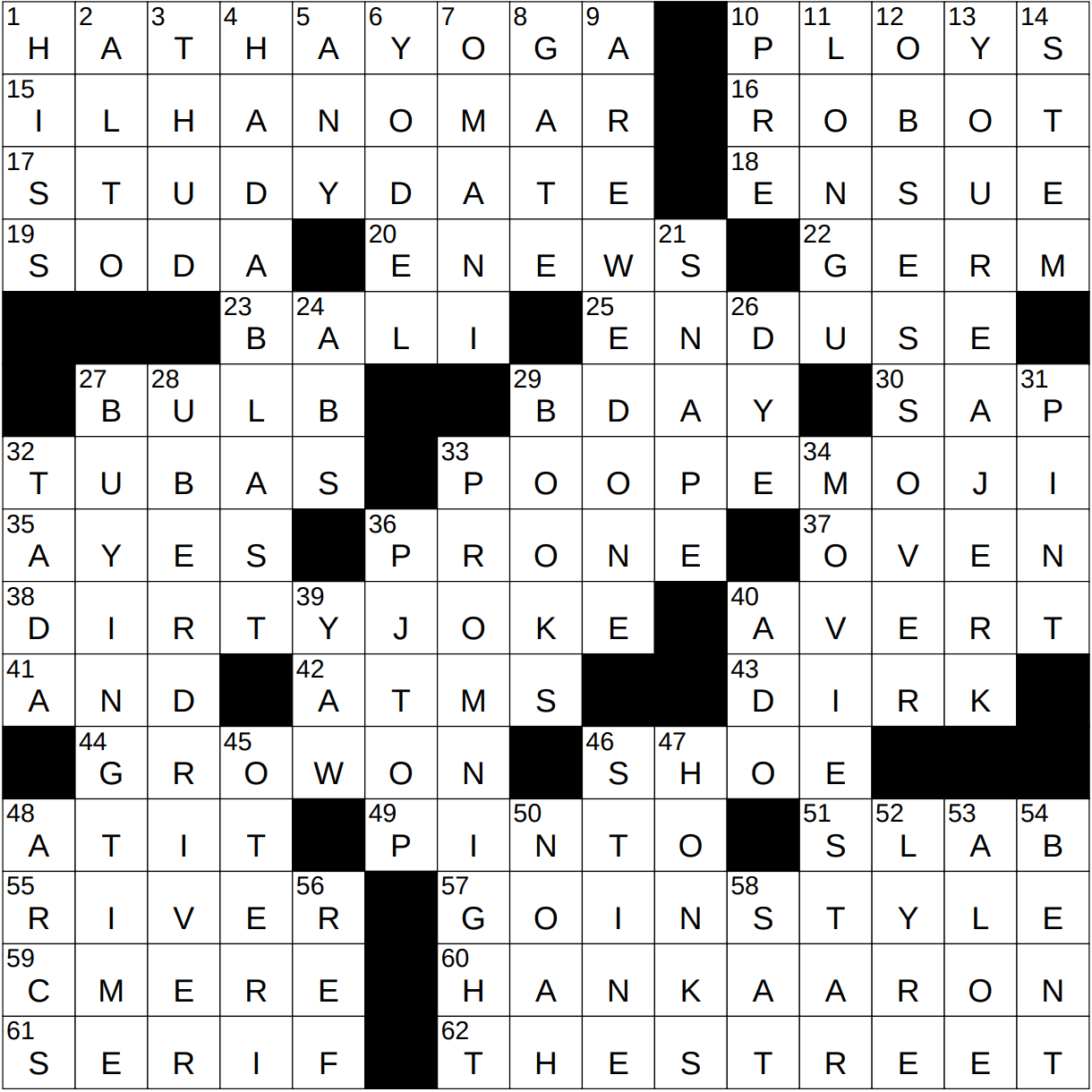 15 Congresswoman who wrote “This Is What America Looks Like” : ILHAN OMAR

Chives are the smallest species of edible onion, and a favorite of mine …

An emoji is a character found on many cell phones that is much like an emoticon, but is more elaborate. The use of emojis originated in 1997 on mobile phones in Japan, and within a few years spread around the world. “Emoji” is a Japanese word meaning “picture word”.

Dirk Nowitzki is an NBA player from Northern Bavaria in Germany. Nowitzki has scored more points in the NBA than any other foreign-born player in the league’s history. He also turns out for the German national team, for which is the captain. Indeed, Nowitzki was named German Sports Personality of the Year in 2011.

A pinto is a horse with patchy markings of white mixed with another color. “Pinto” means “painted” in American Spanish.

A river delta is a triangular landform at the mouth of a river created by the deposition of sediment. The use of the term “delta” in this context comes from the triangular shape of the Greek letter delta. The Nile Delta in Northern Egypt is one of the world’s largest river deltas, and covers 150 miles of coastline on the Mediterranean. The most famous “delta” in the United States isn’t actually a delta at all. The Mississippi Delta is an alluvial plain that lies 300 miles north of the river’s actual delta, yet it is known as the “Mississippi River Delta”. Very confusing …

Hank Aaron hit his 715th career home run on 8th April 1974, breaking the record of 714 career home runs held by Babe Ruth. Aaron went on to hit 755 home runs prior to his retirement from the game in 1976.

The rial is the currency of Oman (as well as Yemen, Iran and Tunisia). Generally, there are 1,000 baisa in one rial.

The letter at the center of the word “Pluto” is a long letter U.

We’ve been using the term “weed” to mean “marijuana” since the 1920s. Centuries prior to that, we started using “weed” for “tobacco”.

Severus Snape is a character in the “Harry Potter” novels by J. K. Rowling. He is the Potions Professor at the Hogwarts School of Witchcraft and Wizardry. Snape was played by the wonderful Alan Rickman on the big screen.

28 One who’ll take you for a ride : UBER DRIVER

When transportation company Uber went public in 2019, it was a well-subscribed offering. However, Uber’s shares dropped in value soon after trading opened, and finished the day 11% down. As a result, Uber shares suffered the biggest IPO first-day dollar loss in US history.

In the US, the convention is to write the title on the spine of a book from top-to-bottom. In most of Europe, the convention is to write the title from bottom-to-top. We have a lot of books in the “library” in our house from both sides of the Atlantic, and so there is much movement of the head from left to right as we glance along our bookshelves.

According to some sources, Samuel L. Jackson is the highest-grossing actor of all time. He earns that ranking because of his talent and box-office draw, but also because of the large number of films in which he appears.

36 Half of an evening outfit, informally : PJ TOP

46 Most prolific author of children’s horror fiction, per Guinness : STINE

A male goose is called a gander, with the female simply being referred to as a goose. Young geese are called goslings.

50 Organizer of a couples getaway? : NOAH

52 Instrument created by Hermes from a tortoise shell : LYRE

The lyre is a stringed instrument that is most closely associated with ancient Greece, and with the gods Hermes and Apollo in particular. According to myth, Hermes slaughtered a cow from a sacred herd belonging to Apollo and offered it to the gods but kept the entrails. Hermes used the entrails to make strings that he stretched across the shell of a tortoise, creating the first lyre. Apollo liked the sound from the lyre and agreed to accept it as a trade for his herd of cattle.